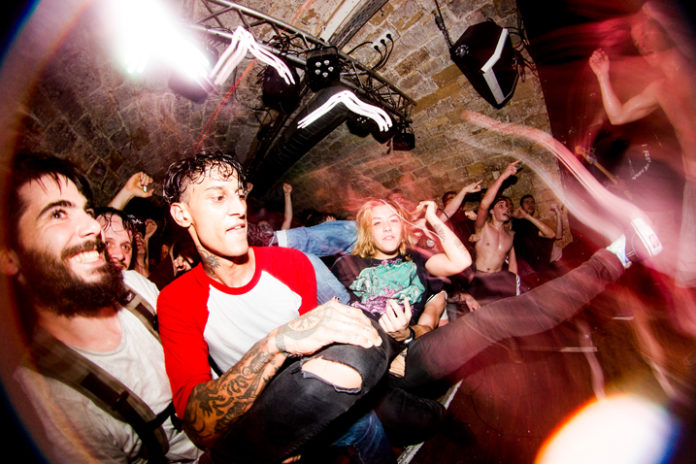 How would you feel going back to shows if a deadly attack happened in a club in your hometown? Three weeks after 89 people were killed inside Le Bataclan—and as live music starts happening again around Paris—AP reached out to the French capital’s scenesters.

While the bands are playing, it looks like any other show anywhere in the world. Stagedivers’ sneakers fly through the air, boys and girls lose their voices as they sing along and enthusiastic smiles illuminate sweaty faces. The winter air is chilled, but the pit is as stifling as ever in the basement where hardcore’s new favorites, Turnstile, are playing the Paris date of their European tour.

The energy and the passion are still here; it’s still vibrant. It’s when the music stops that you can tell you’re at a show in the city where a few weeks ago people were slaughtered while attending a concert.

“I have a friend who lost his sister at Le Bataclan,” a tall, young guy in a backwards cap shouts in a sharp French accent to a man at the merch table.

“So awful, man,” the merch guy empathizes, unsure of how to reply in such unspeakable circumstances.

Outside, people are escaping the heat or having a cigarette on the sidewalk between sets. Just like at any other underground gig, they are sharing their thoughts on the latest bands, new records and upcoming shows. But that night—Nov. 13—keeps coming up.

“I was at a punk show two nights after the attacks, and it was the weirdest show I’ve ever been to,” confesses Juliette Croze, a 31-year-old redhead with her musical tastes proudly embroidered on her denim jacket. “There were not many of us, and we all looked despondent, but everyone that was there needed to be there. We needed to come together and have a good time.”

We’ve heard much from the bands, traumatized by what their peers in the Eagles Of Death Metal had been through. We’ve also heard from the promoters devastated by the tragedy their world had been hit by with massive repercussions on ticket sales and cancellations. It was unclear however how the community in the center of this all—the fans—would react.

“There’s obviously a slight sense of psychosis,” shares Jérémie Maire, a well-groomed punk and Eagles Of Death Metal fan outside of a nowhere-near packed Refused show on the mild first night of December. “When I got into the venue, I told myself I would look up where the emergency exits were, just in case. But I forgot as soon as I got a beer in hand.”

For Maire, just like for everyone else who regularly spends weeknights inside concert halls, it was hard to talk about anything else. “It still is,” he adds.

Maire almost went to the show at Le Bataclan, but decided against it, having seen the band only a few months before. He admits the accidental escape from tragedy deeply affected him. “But after crying a lot and pondering on the ‘what-ifs’ all I wanted to do was watch live music with my friends.”

His first show post-attacks was five days afterwards: British pop-punkers Gnarwolves shared a bill with Pennsylvania’s Spraynard. “When I got there, the show had already started. I went straight to the pit and crowdsurfed on the spot,” he says. “It was an incredible liberation.”

It seems most Paris music fans felt this need for live music and a return to normalcy. “I go to a great deal of shows,” says Laurie Beck, a 24-year-old publishing assistant who also writes for a webzine covering live music in Paris. “And the [break] we were imposed by the cancellations after the attacks was way too long, I needed to go back to shows.”

Her live music fix came two weeks after the tragic events. “I went to the Impericon Never Say Die! Tour with the Amity Affliction, Defeater, Being As An Ocean and others and then Machine Gun Kelly four days later,” Beck says. “I did not hesitate, but I have to admit that I asked myself a lot of questions, especially when it comes to the names of the shows, thinking that the words ‘die’ and ‘gun’ could draw the attention of ill-intentioned people…”

She looked for the emergency exits and the security guards even if she tried not to think (or talk) about the attacks. “It’s impossible,” she says. “We’re all thinking about it, and talking, in a way, enables us to relax and realize we’re all in the same boat.” There may be one benefit for the Paris scene following those traumatic events. “I feel like this brought people closer,” the young Parisian explains. “It’s a small community, and we all kind of know each other, at least by sight, and in a sense it made us feel more responsible of each other because we’re scared of not seeing those faces again.”

“They’re having a hard time going out,” she says. “Talking about shows is still taboo. It’s going to take time.”

“We should not take anything for granted, not even music”

From the city streets to their Facebook pages, the French are proudly demonstrating their will to “keep on living.” They are turning things like having a drink on a café’s terrace or going out with their friends into acts of citizenship, though some dispute that the actions are defiant.

“I don’t believe in this,” Maire says. “Going to a show or a soccer game will never be an act of resistance. They attacked insouciance, amusement and togetherness—not music shows. I’m not scared of going to a concert, but I’m not proud either.”

Some may see no rebellion in keeping on with daily life, but the possibility of losing it all makes Beck more grateful.

“I am more aware of the chance I have to be in a concert hall, to watch an artist…” she says. “It made me realize we should not take anything for granted, not even music, the best remedy to overcome those hard times.”