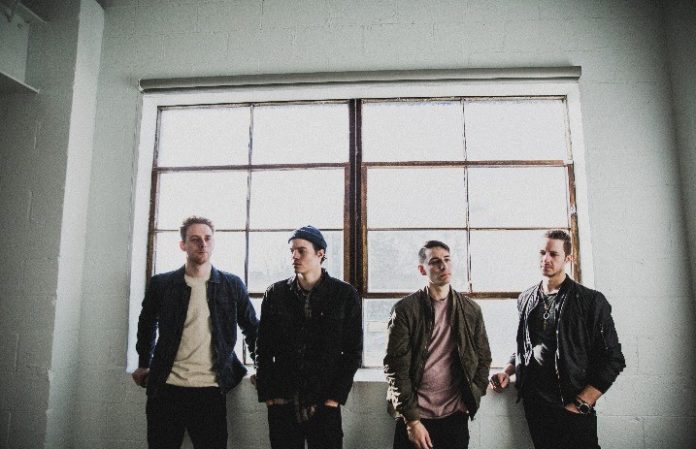 Fans often are disappointed when they hear their favorite band are moving away from the heavy metalcore sound that drew them in in the first place. In a way, it can feel like abandonment. Although The Plot In You vocalist Landon Tewers says that breakdowns are no longer his main concern, that doesn’t mean the band’s sound is lightening up.

READ MORE: Someone brings baby into wall of death, looks like a terrible idea

“It’s just a different kind of heavy,” Tewers says of the band’s fourth full-length, DISPOSE. “There’s the typical, every-metalcore-band-right-now [sound] that’s just breakdowns and the same kind of riffs; just making small adjustments to it to make it something unique. Then there’s another kind of heavy where it’s more like the lyrics are heavy and the vibe is just darker. I think subject matter plays a lot into what you can say is heavy. I just think there’s a lot of different ways to be heavy without being the typical chug breakdowns with the metal riffs.”

As far as dark subject matter goes, Tewers wrote and recorded this record while he was in the middle of a toxic breakup, which is why it’s a particularly emotional release. “DISPOSE, specifically the album title, links back to feeling like you’re disposable and feeling like you need to dispose of something that’s not really helping you grow and progress,” he says. “It goes both ways.” Previous TPIY records were written in retrospect of a traumatic event, but DISPOSE takes place in the exact moment of turmoil.

Because of the negative feelings at play here, the new record still features some aggressive vocals and doesn’t forsake the intensity found on the band’s previous records. Their single, “FEEL NOTHING,” for example, could have easily been found on 2015’s Happiness In Self Destruction. However, the band’s new release is more contemplative and transcendent than the last, both in terms of sound and content. DISPOSE toys with various genres under the rock umbrella, often subverting the traditional verse/chorus song structure.

“It doesn’t really have a structure,” Tewers says of the album. “It doesn’t sound as planned out. That’s something I’ve been getting into more—songs that are more unpredictable and take you on a journey.” He cites “RIGGED” and “DISPOSABLE FIX,” the opening and closing tracks, respectively, as his favorites for that reason; they are open-ended and constantly developing in unexpected ways.

Songs on the new record vary from alternative rock to electronica, many switching seamlessly from one genre to the next in a matter of seconds. DISPOSE makes it clear that TPIY challenge both the listeners and themselves more and more with each release. “I think it’d be cool to really experiment more with sounds outside of just guitar, bass and drums,” Tewers says. “Not to say we’re going to go totally Maroon 5, but I just want to keep experimenting and keep changing things and just keep trying to be innovative. I get bored with different styles of music very quickly. Anyone who knows our band knows to never expect the same thing over and over.”

To help guide them through such a game-changing record, TPIY turned to an outside producer for the first time ever. Drew Fulk—who has produced dozens of beloved bands in the scene including Motionless In White, We Came As Romans and Cane Hill—played a major role in the writing process.

“That was a big help in crafting a new sound and getting another fresh set of ears on everything,” Tewers admits. “I was bouncing ideas back and forth off him, and he really dug it. It just worked out perfectly. It was definitely a gamble… we had never worked with anyone before. But I’m definitely glad we took that leap. I can’t imagine it turning out differently.”

For all that the band have changed in order to create DISPOSE, it is still a cohesive work that longtime fans can appreciate. But even if they don’t, Tewers will still be content. “I don’t know what it is,” he says, “but I almost get more satisfaction these days pissing people off by throwing them for a loop and them not liking the direction we’re going now. Maybe it’s some sick mental disorder, but I just love that. I get off on that. It’s really fun. Especially when you can just tell that somebody only liked our first record; they just want to hear breakdowns. It’s like, ‘Awesome, I’m glad I could bum you out today.’ That makes me happy.”

The Plot In You are set to tour with We Came As Romans this spring. From there, they will head off to Australia and Europe in support of their new record.

Hear an exclusive teaser of “Happy” below:

“That one was a fun one. I actually wrote that one in one night. Mathis [Arnell], our drummer, he wanted a little interlude for the end of “Feel Nothing.” It was just supposed to be for the video—it wasn’t going to be on the record. But then [we] ended up sending it out [to Fearless Records] and everyone really, really liked it.”