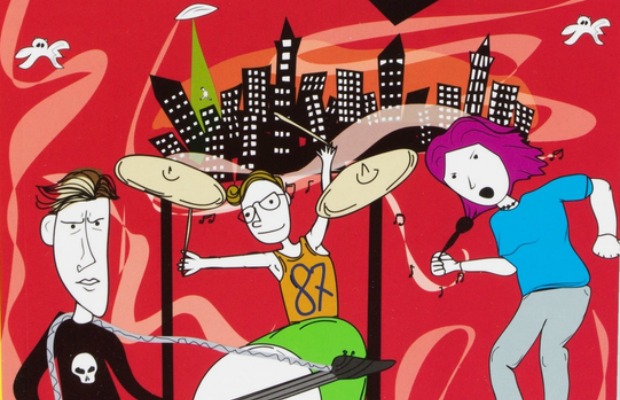 Read an excerpt from the new(ish) book, Punk USA: The Rise and Fall of Lookout Records, a musical history book chronicling the story of Lookout Records and the label's bands, written by Kevin Prested. This chapter focuses on the band Screeching Weasel.

THE YEAR OF THE WEASEL

Aside from Green Day, one band was becoming synonymous with the world of Lookout from every perspective and on every level throughout the 1990s, inﬂuencing not only the world of punk, but also the way the label would operate and thrive—Screeching Weasel.

John “Jughead” Pierson (Screeching Weasel, The Mopes, Even In Blackouts): “We were struggling on a tour, and then one day we had a show in Philadelphia at some dingy bar called The Flame. I thought, ‘oh my god, no monitors, no audience, just another day,’ and then hundreds of people showed up and were singing our songs. All because of the release of My Brain Hurts on Lookout”

The ﬁrst incarnation of the band came together between co- workers Ben “Weasel” Foster and John “Jughead” Pierson.” They teamed up with drummer Steve “Cheese” Dubick, making a trio with Foster on Bass and vocals. But lacking the ability to play both bass and sing, the bass duties were handed over to Vince “Bovine” Vogel. This lineup recorded the self-titled full-length vinyl for Chicago’s Underdog Records.

The debut was a raw experiment, speedily recorded for a grand total of around $200. There are traces of the melodies that would become prominent in later works, and the recording served the band well locally. With most tracks barely hovering over the minute mark, the debut was an energetic attack of crude four-chord punk tunes. As they evolved as a band, Screeching Weasel attempted to disown their early output shortly after its completion, with Ben Weasel citing the recording as being unrepresentative of the legacy created by future releases.

John “Jughead” Pierson (Screeching Weasel, The Mopes, Even In Blackouts): “In really early interviews with Screeching Weasel I loved sharing my inﬂuences. Ben would say the Ramones, and I would say Queen and Jethro Tull. I liked that dichotomy. I liked the Ramones too and Circle Jerks and Angry Samoans and Adrenalin O.D, but I didn’t want us to be pigeonholed. I love punk rock, but it made more sense to incorporate all my inﬂuences and to try to start over and do something diﬀerent—which was Screeching Weasel’s intention in the 80s.”

Warren “Fish” Fischer (from The Ozzﬁsh) quickly replaced Bovine after the self-titled debut, and they recorded a second album—which was, in the eyes of some, the band’s ﬁrst real album—Boogadaboogadaboogada, reissued later as (LK 62).

Shortly following the recording of the second album, Steve Cheese was replaced by Brian “Vermin” Mcquaide. Fish didn’t last very long in the ranks either, but Screeching Weasel was getting stronger and ﬁnding its sound, as much as the constant lineup changes made the band appear unstable.

Dan “Vapid” Schafer (Screeching Weasel, Sludgeworth, Riverdales, The Mopes): “I was asked to audition as a singer in a hardcore band called Generation Waste. Screeching Weasel and Generation Waste did a show together in 1987 and I caught a ride back to Chicago in Ben’s car because he, John, and I all lived in neighboring suburbs. On the ride home, Ben played some new [Screeching Weasel] demos and I was really into them. I remember really liking the song ‘American Suicide,’ and thought it was better than anything that the other local bands were doing at the time. I became a big fan of Screeching Weasel and knew they were on to something. Soon after that, Generation Waste was in the studio trying to make a record and it was just a disaster. Not too long after the band was done, Warren Ozzﬁsh left and Ben needed a new bass player for the band. Ben and I were likeminded about the kind of music that we wanted to play, and we were from the same area. I was just learning bass, but he let me in anyway.”

With the new and improved lineup, the band headed back into the studio to record the ﬁrst release with what became its classic nucleus— Weasel, Jughead, and Vapid—then known simply as “Sewercap.” The six- track 7” EP Punkhouse was released 1989 on Limited Potential Records (later repressed by Ben Weasel, and again by Selﬂess Records)—and showcased the pop edge emerging from the band.

Dan “Vapid” Schafer (Screeching Weasel, Sludgeworth, Riverdales, The Mopes): “When I joined Screeching Weasel in 1989, the band had done just one tour prior. We played locally a few times at a place called McGregor’s, but my ﬁrst actual tour with the band was in Ben’s car and we had no equipment. We just packed our guitars and some merch, and left for the West Coast. Our ﬁrst show of the tour was in Corvallis, Oregon and it took about 40 hours to drive there. Our next show was at Gilman Street. On the way there, we blew a tire. We brought the tattered tire on stage that night. Jesse from Operation Ivy and Jake from Filth had spiked their hair and were in the pit. The next show, we traveled up to somewhere in Northern California and played a show with Green Day. Screeching Weasel and Green Day stayed at Larry Livermore’s house that night.”

Not surprisingly, after the tour, Screeching Weasel broke up. Vermin and Vapid kept busy with another melody-edged band, Sludgeworth. Ben Weasel went on to form The Gore Gore Girls while playing guitar for a new Chicago outﬁt, The Vindictives. Screeching Weasel appeared to be history.

Two years later in 1991, a one-oﬀ Screeching Weasel reunion was organized with plans for the proﬁts to go towards debts incurred by the band. With a successful return under their belts, the conversation turned towards putting the band back together. Everyone was in agreement except for drummer Brian Vermin.

Brian Vermin (Screeching Weasel, Sludgeworth): “I declined because Sludgeworth was moving along nicely and I had a lot of input on what Sludgeworth did. In Screeching Weasel you just rode in the backseat while Ben drove. Screeching Weasel was going a very Ramones route, and truth be told…I hated the Ramones. I did my ﬁrst tour with Weasel when I was sixteen! So at age eighteen I ruled the universe in my little brain, I got a taste of self-induced success—as far as Chicago punk goes—and didn’t want to just ride along.”

The band recruited Dan “Panic” Sullivan behind the kit. Ben Weasel moved full time to vocals, with the bass player brought in from The Gore Gore Girls, Dave “Naked” Lally, while Vapid moved over to second guitar.

The songs that would become Screeching Weasel’s third album, My Brain Hurts (LK 50), were conjured up through cooperative sessions between Weasel and Vapid. Jughead received only one writing credit, for the re-recorded Punkhouse song. “Fathead.”

Lawrence Livermore oﬀered a record deal for the new release, remembering his encounter with Ben when the band played at Gilman Street with Operation Ivy in 1988. Ben wanted to drop the Screeching Weasel legacy into the ocean and start afresh with a new name, but the Lookout contract stipulated that the new release would use the publicity from the Screeching Weasel moniker and feature new songs written for the band, as well as the inclusion of the older track “I Wanna Be a Homosexual.” Livermore had previously made an oﬀer for Boogadaboogadaboogada— losing out to the already committed Roadkill Records—but the oﬀer was accepted this time.

John “Jughead” Pierson (Screeching Weasel, The Mopes, Even In Blackouts): “I remember Lawrence taking Ben and I out for pizza, the decision to keep the name the same seemed to become a bigger deal with hindsight. We promised the song ‘I Wanna Be a Homosexual’ to Bruce LaBruce, it wasn’t left oﬀ as has been claimed. We chose to give it exclusively to Bruce. We knew it was a good song. Lawrence almost cancelled the deal based on this, but it went through. Most of those songs were just Ben and Dan [writing] with no pressure. It was much more organic back then. Once we got everyone together…it was already established that it would indeed be Screeching Weasel.”

Mopes): “I remember thinking in a small way that the band had made it—

Screeching Weasel was the ﬁrst band outside of the east bay to have signed to Lookout Records. We had stopped in San Francisco in the summer of 1991 while on tour to record My Brain Hurts with Andy Ernst at Art of Ears Studio. I thought it was cool to record in a city other than Chicago, where all these bands from the East Bay and other Lookout bands were recording.”

Andy Ernst, along with Livermore, produced the sessions that would lay down some of the band’s timeless classics. With a consciously pop-edged sound, the band hit a winning formula in the classic lineup’s ﬁnest moment. The record took oﬀ, leaps and bounds beyond their others, and provided a platform for the band to establish a career. Following My Brain Hurts, the band replaced Dave Naked with another new bass player, Scott “Gub” Conway. Conway continued with the band for two tours and the recording their next full length, Wiggle (LK 63).

Scott “Gub” Conway (Screeching Weasel, Even in Blackouts): “Dan Panic and I were roommates and previous band mates in Ivy League. I was going to roadie and drive them for a tour. Things worked out that I would play bass as well. Everyday we were having a good time in my book. I always got along with everyone. There was always someone who wanted to try and argue with Ben. They would try but they always would make themselves look like an ass. I think for everyone at that time things were not so “P.C.”—you were not so concerned about saying the right thing to not oﬀend someone. There were no publicity machines pushing shows and records for punk rock. You had MRR and a dozen local fanzines as your PR. Your local promoter was contacted on a payphone. Better bring a map, there was no GPS and deﬁnitely no big label advances. We were doing this on our own, with our own ﬁnances, building networks from friends. The world we lived in was falling into destruction and we were all pissed oﬀ. With that in mind there was a real sense of humor invoked as well just to keep our sanity.”

Get the book on Amazon today.