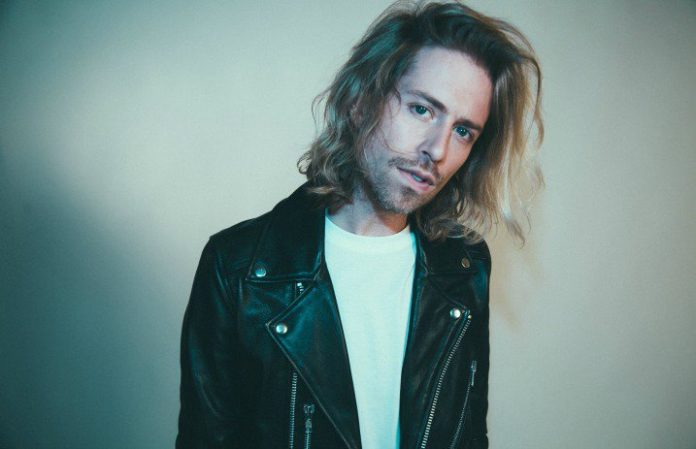 A lot of factors go into making a music video—the actual song, treatment, setting, cast, production and cost—but when it came time for the Rocket Summer to film a new video for a track taken from his latest album, Zoetic, frontman Bryce Avary says it was a no-brainer to choose “FL, CA,” the heavy-hitting, synthy-pop song with a whole lot of guitars and drums, and even more of a no-brainer to include his loyal legion of TRS fans.

But creating a music video does come with obstacles. In this case, the video shoot was almost shut down by the Los Angeles Fire Department thanks to the two-second fire in the video.

When AP last spoke with the Rocket Summer before the February release of Zoetic, Avary said the album tapped into a realm of honesty and inspiration that had no rules or boundaries and promised the album to be unlike any other record he had ever created. Having more “teeth” and “a little more bite” than previous records, Avary admits some fans think it’s his best album while others don’t, but he’s still happy he went for a different sound and is grateful that his fans allow him to experiment, push boundaries and truly be an artist.

“Honestly, it feels sweeter now. It feels almost more real, not that it didn’t in the past. It just feels like it’s not going anywhere,” Avary says of his career now compared to years ago. “Where I’m at right now, I’m really happy about, but I’m really happy about the future. Being totally content is a bad thing, and I always want to push myself to do something better. I’m very fortunate to get to do this, and in a way, it feels stronger than ever. The fan base, the core of the Rocket Summer, feels sturdier than it ever did.”

Avary has a tight knit, long-lasting relationship with fans that now spans over a decade and six studio albums, so it’s not surprising that the singer-songwriter and multi-instrumentalist wanted to give back to his dedicated fans by showcasing the vibrant relationship between fan and artist, which he says makes up the heart and soul of the band and ultimately what the Rocket Summer really is.

“I feel like my fans are legitimately the only thing I have. I don’t even know how to verbalize it,” Avary admits. “It’s so special. There’s so much love in the room, and it’s extremely difficult to not be on tour because that’s where I feel most normal, just being with them. It truly is like a real relationship that we have with our fans … there’s a lot of love, and I feel so fortunate. I don’t know why that exists, but I’m super grateful for it, and I want them to know every chance we can.”

According to Avary, it became very apparent while on tour that “FL, CA” was connecting with fans and quickly became a sing-along jam each night. “It kind of made the decision for us,” he says. “We were like ‘I think we gotta make a video for this song!’ [Laughs.] It’s really a fan favorite and when it comes to stuff like this, [I think] what would be best? What would they [the fans] like the most? That was the reason we wanted to do this video, just to showcase them and what we have.”

While the visual aspect for the “FL, CA” video centers around the Rocket Summer’s powerful, energetic live shows, one of the most rabid fan bases around and Avary’s craving for musical experimentation, the track digs a bit deeper. The song itself strikes a heavier chord lyrically and connects on a personal level with Avary, who explains the song is about how dangerous a weapon love can be in the hands of two people who simply are not meant for each other. “It’s written from the perspective of being a bystander, knowing that the train is going to derail and go up in flames but also knowing there’s no chance of getting through to a friend and not knowing what to say when it does go up in flames,” he explains. “It just happens to be dressed up in a catchy pop song. Love is a powerful thing, even when it’s not the right love.”

While this may be the sweetest era for Avary, he’s nowhere close to being settled. In fact, he says Zoetic marks a spot in his career that feels like it’s only just the beginning. “I still have huge dreams. I legitimately believe the Rocket Summer hasn’t entered into the place that it’s meant to enter into—whatever that [place] looks like. That’s honestly what keeps me going. It weirds me out when people make comments that are like, ‘So rad you’re still making music.’ I’m like, ‘What are you talking about still making music?’ That’s all I do. I’m a songwriter. I’m going to be doing this until I’m 70 years old. [Laughs]. This is the beginning of my career.”

Check out the new video below, and don’t blink or you might miss the recreation of the Zoetic album artwork.: