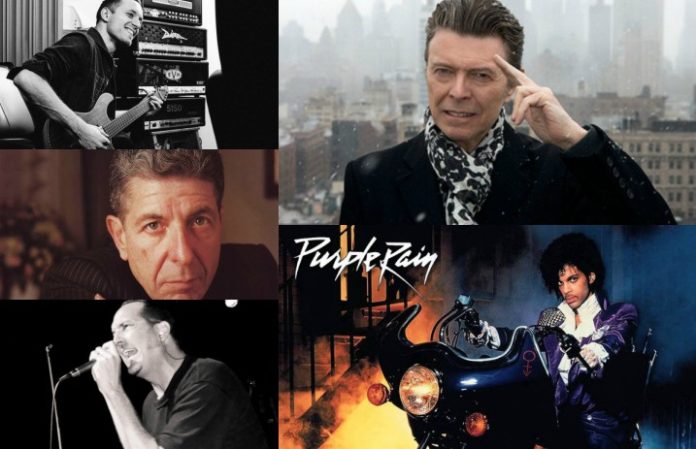 Now that the whirlwind of 2016 has come to an end, we wanted to take a moment to remember some of the talent we lost last year. Though these talented artists have passed, their legacy and influence will live on. Below, artists remember and reflect on those legacies.

Leonard Cohen's “Hallelujah” transcends any genre or era of music. In my opinion, and I think many would agree, “Hallelujah” is pure poetry at its finest, with a beautifully perfect melody and music that makes you want to listen over and over, or in some cases cover the damn thing. Thanks to Jeff Buckley's version of the song, I was led to discovering Leonard Cohen. Leonard Cohen's body of work influenced and impacted so many artists and still does. When I listen to him I hear Bowie, Tom York, Dylan, Bjork, the Cure and many, many more. Amongst all the artists that were inspired by Leonard, I myself covered “Hallelujah.” One night at a show in Los Angeles, after my set I was approached by a man claiming he worked for Leonard and his estate. He explained to me that my cover was amongst his favorite interpretations of Leonard's work, and that he was going to play it for him. Well, obviously there is no guarantee that Leonard ever heard my version of his song, but the thought that he could have heard it and possibly enjoyed it means everything to me. RIP Leonard Cohen you will be missed by the entire artistic community and pretty much the rest of the world.

It might seem a little late to share this story, but it’s been on my mind lately, and I figured it would be a shame not to share it at all. This story goes back a long time, over 10 years ago when we had just started Mayday Parade. One of our first shows was in Tallahassee opening for Further Seems Forever, one of my all time favorite bands. On the day of the show I ran into Jon Bunch (singer of FSF at the time) in the parking lot and we chit chatted for a bit before I nervously asked him if they would be playing “For All We Know” that evening. He apologized and said it wasn’t on the set list. I thought it was cool that I got to talk to him anyway. After we played, I was standing in the front row watching FSF and having a wonderful time when Jon said, “Hey where’s the singer of that first band?” I raised my hand and he pulled me up on stage and told me they were going to play “For All We Know”—and I was going to help sing it. It was the kind of stuff that dreams are made of. After the show, they asked us if we could finish the tour with them, so we packed all of our gear in Jake [Bundrick]’s parents’ car, and did our first regional tour as a band. Each night, they played “For All We Know” and Jon had me come out to sing with him. Even with all of the amazing things I’ve been able to do in this band, I still consider that to be one of the coolest things that has ever happened to me. Jon also gave me wonderful vocal advice and later on even let me borrow his in-ear monitor system so that I could try it out on the road. Jon passed away early this year. His kindness is something that I will never forget. He was the kind of performer, musician and overall great person that I strive to be. There’s a light up ahead.

I remember listening to Prince's “Little Red Corvette” for the first time. He changed my whole perspective on songwriting and storytelling. The way he brought you into another world with each song through his unbelievably vivid imagery and the sincerity in every line was unreal. He was one of the most fearless artists of our time. From his fashion, to his music, to standing up for artists creative control and ownership of their own work around the world. Many people, including myself, will be inspired by him for generations to come, but there will only ever be one Prince.

Patrick Stump of Fall Out Boy on David Bowie

As a kid, I was familiar with him from the movie Labyrinth and his bigger pop hits like “Modern Love” and “China Girl.” He was always there, but the first time I noticed him— like, really noticed him—I was in the car with my dad driving through Chicago. We were listening to this station called WXRT and they played “Sound And Vision” from Bowie’s 1977 album, Low. It was so weird, so different from anything I’d heard, including anything I’d heard by him. I’m sitting there listening and I said to my dad, “Oooh, I like this” and I turned it up. But then I got really self-conscious. I knew the song was weird so I wasn’t sure if that meant it was “uncool.” So now I’m like, “Hmm, I don’t know…” And my dad’s like, “It’s totally cool to like David Bowie.”

I liked the record [All Our Gods Have Abandoned Us] when [Architects] put it out, and we did a five-week tour with them and I can’t stop listening to it. I finally dove into it in a way that really kind of has been emotional to me because they recently lost [guitarist] Tom Searle, who is just an absolute fucking legend for our music scene. To see what that tragedy has done to the band and how Tom obviously left a hole in their hearts that will never be filled, but he also left this kind of profound awakening in all of them that you can just see and feel—and it’s infectious. The only regret I have when it comes to Architects is not knowing Tom better than I already did. Just seeing his genius, and that whole record is pretty much about him facing the reality of his own death and questioning all of that. Fuck, it gives me goosebumps just talking about it.

This is taken from a piece where Barnett reflects on his favorite album of 2016. See the full story here.