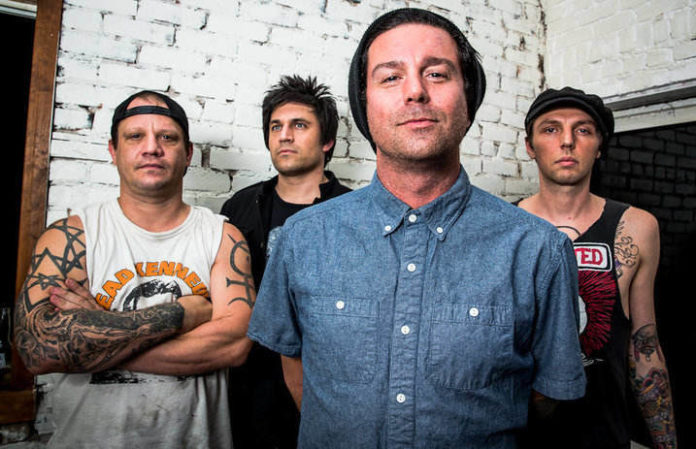 It’s been 21 years since the release of Unwritten Law’s debut full-length Blue Room. That album went on to attract the attention of Epic Records, leading to their first major release, Oz Factor, in 1996. In other words, Unwritten Law have been around for a long time and have paid their dues along the way. Currently entertaining their dedicated fanbase in Australia, the band is gearing up for some big things just around the corner. Come March, they will be hitting the road for a national tour with Fenix TX, as well as releasing a new acoustic album under their new label, Cyber Tracks. Considering it’s been over five years since the release of Swan, it’s probably safe to say that fans are more than ready to hear something new from Unwritten Law. Could 2016 be their comeback year?

How has the tour in Australia (Love Is the Law) been going?

The tour has been epic so far. We are on a two week run with Grenadiers, who are an amazing band from Adelaide.

How did you come to signing with Cyber Tracks?

It came about quite accidentally. Jen and Aaron [Abeyta] had come to our kick-off show on the first leg of the Love is the Law tour and it kind of just went from there. I've known those guys for a long time.

It's been over four years since your last record dropped and two years since the promise of your acoustic album. What have you guys been doing to keep busy?

As a song writer and artist, I'm always busy. I work with a lot of artists on everything from Hip Hop to EDM and everything in between.

With this acoustic album coming out in 2016, will it be composed of new material, old material or a mix? If anything old is being used, how did you choose said songs?

When we sat down to do this record, it became immediately clear that I wasn't going to be happy with a record of just me and a guitar, singing songs in their original arrangements. The album is thirteen songs, eleven previously released songs, a cover and a brand new song. It may sound cliché, but the songs chose themselves. Like a cosmic Fed-Ex.

Why did you choose to do an acoustic album in the first place? How did this idea come about?

So…if I'm being a hundred percent honest, the idea was to put out something quick and cost effective. Something to give us time to regroup and write a new record without as much pressure.  After thirty minutes of the first session that was meant to be just myself and my guitar, I told the producer I was sick and I left. Music that is put out into the world is a tattoo. You can never take it back. I wasn't going to let something like that be part of my legacy.

While recording this album, what difficulties did you face?

The only real obstacle was time. There was all the usual studio stuff that comes up, but that's part of the process. We ended up with so many different instruments and sounds on this thing that we kind of gave up on being timely, and just focused on making it memorable.

Any tracks that were especially fun to record?

Chris had this idea for the acoustic version of “Shoulda Known Better”.  He went to Lowes and spent like a thousand dollars on a bunch of shit. Giant planks of wood, all these different pipes, chains, sheets of metal, tools, you name it. He built the beat out of all these things, like those guys that make special effects sounds for movies. Foley actors. He even used the plastic bag from the store that the stuff came in.

How was the studio experience in general? What did you do to pass the time in between sessions?

It was pretty postal-serviced towards the end. We'd all be working independently, and then come together for key moments and mixing sessions. We all have so much other shit going on, it was hard to do this record in the traditional way. Wade, as always, is a force of nature. Everything he played came straight from his soul. My little brother Jonny, who's on bass, is always with me so that was easy. As much as it was done in sprints, it was as organic as the situation would allow.  Our producer Jimmy and I did the bulk of the work alone at the start, then I took a break from it and handed it off to Chris and our mixer Joe. Of course, we still tracked during mixing. We would be sitting there and realize, shit, something's gotta go there. Go get the cello.

When you return to the US, you have a full run planned with Fenix TX. How did this tour come together, and why Fenix TX? Where will this tour take you, and what will it be supporting/promoting?

We've toured with Will and the Fenix guys several times. They're our boys. The fact that our guitar player, Chris, is still playing with Fenix TX had a little to do with it, but mostly it just felt natural. The tour will go from LA, across the bottom through Texas and over to Florida, then all the way up to NYC and back through the middle. I know the Fenix guys have been working on new music, but I'm not sure that's what they're supporting. For them, I imagine it's a celebration for Will's recovery from his stroke. Doc gave him the clean bill of health to tour again, and that's an amazing accomplishment.  For us, it'll be in support of our Acoustic record, which comes out in March.

On this tour, what things are you most looking forward to?

Playing for the fans that have been with us since the beginning. Being around the people I love and making memories that I'll have for the rest of my life.

What songs are you looking to play on this tour? From which albums? Will there be any new material to debut?

Without giving too much away, we're really looking to give people an experience. Playing songs that even the lifelong fans may have never had a chance to hear back in the day. We'll most likely be incorporating some aspects of our new record. I've said too much!

It sounds like 2016 could be a comeback year for Unwritten Law. Are you guys excited?