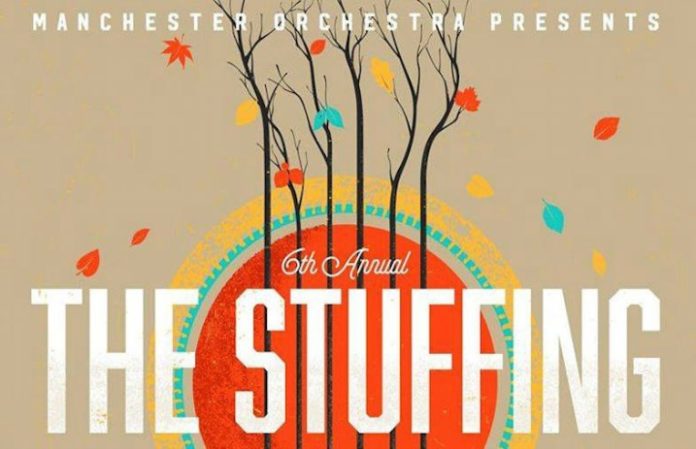 Manchester Orchestra know how to throw one heck of a party. Serving as the ultimate holiday party hosts, the Atlanta-based rockers have consistently rounded up their friends for a blissful night full of camaraderie and rock ‘n’ roll. Tonight, the band presents the 6th annual The Stuffing at the Center Stage Atlanta Music Complex, which will house 10 bands performing across three different stages for a sold-out night of pre-Thanksgiving, unabashed music gluttony. If you can’t make it to The Stuffing, never fear. We have curated a tasty playlist to satiate your indie-rock craving. Prepare to be “stuffed.”

Manchester Orchestra certainly have friends in all the right places. And their friends have credentials. It’s probably pretty easy to throw a rocking party when your friends are Cage The Elephant, Dustin Kensrue (Thrice) and Kevin Devine, all Stuffing veterans. But front and center are Manchester Orchestra as the party hosts you dream of being. And if we’re being honest, they’re also like the main course—the most glorious, savory Thanksgiving turkey. While you know you’re going to have turkey every year, you still very much look forward to it. And it still tastes just as good (if not better) than the year before.

The Front Bottoms – “Laugh Till I Cry”

The Front Bottoms are no stranger to The Stuffing, and though the New Jersey natives may be a little more pop punk than the others at the Thanksgiving dinner table, they’ll keep the celebration jumping. (You might not want to jump too hard on a full stomach…)

Not only are O’Brother also Atlanta natives, but the band have faithfully performed at every Stuffing since 2010. They’re like the old friends who invite themselves over to your holiday party every year, but you can’t complain because they make a great sweet potato pie —or in this case, delectable alt/post-hardcore jams.

The Smith Street Band – “Get High, See No One”

I mean, who wouldn’t want an Australian at their party?

With Big Jesus comes a mighty big sound full of heavy, grinding guitar melodies and twisted Southern rock and roll. Also Stuffing veterans, this four-piece Atlanta-based group will melt your face off. (Top your mashed potatoes with that…)

Microwave – “but not often,”

When someone describes their interests as “beer and fried chicken,” it makes them automatic winners. They are also the antidote to your post-metal food coma. Step up!

Hailing from nearby Athens, Georgia, Chief Scout are a groovy mix of psychedelic punk and rock ‘n’ roll. Simply put, they are the life of your next three parties (when you invite them, of course).

With an album titled The World Is A Terrible Place And I Hate Myself And Want To Die, the Superweaks may seem a bit more angsty than the rest of the party guests, but the Philly-based rockers certainly won’t be putting your sensibilities to sleep in less than two minutes.

This four-piece pop-rock outfit from Nashville are just so darn likeable. They’re like the person at the party who you constantly gravitate toward and low-key want to be your new BFF.

MIGHTY will undertake his first-ever live performance at this year’s Stuffing, and he’s got some pretty cool friends too—try Grouplove, All Get Out and this year’s Stuffing brethren O’Brother and Big Jesus, all of which participated in the recording of his debut EP. While he may be the new kid on the block, MIGHTY creates the type of indie/alt rock that makes him a perfect fit for this raucous group.