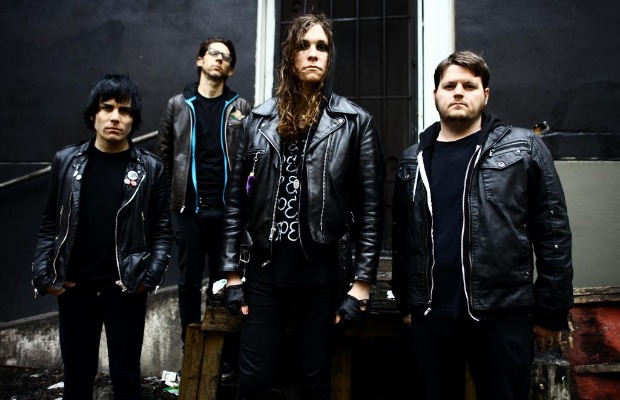 Fat Wreck Chords is turning 25, and they’re hitting the road to celebrate with Fat Tour: Fat Wrecked for 25 Years, starting August 6 in Toronto. The roster will feature Fat Wreck bands both classic and newly discovered, including NOFX, Lagwagon and Masked Intruder. To celebrate, we decided to take on the foolish task of trying to pick our ten favorite Fat Wreck Chords.

In order to prevent this list from being a bunch of Propagandhi and Lagwagon records, no band can appear more than once. No compilations. EPs are only considered with an extremely scrutinizing eye. We're looking at full-length statements of intent here.

Looking at this list, it's clear that the heavy presence of nostalgia informs it; Good Riddance, for example, may have put out better albums after their debut, but none that hit as hard during time and place and era. So there's context, there's personal preference, there's the infuriating and hair-pulling task of trying to nail down which Strung Out album should be in here. It’s all in good fun.

Like Jawbreaker meets the best parts of NOFX, this incredible album takes the best of some of Fat's relatively unsung bands (Avail, Smoke Or Fire, the Lawrence Arms) and mixes it with a bit of their classic edge: It's rough and rowdy but it's fully aware of its flaws, and the scratchy bits fight with the melodic bits to create a perfect tension the band tries (unsuccessfully) to race right past. Gives me goosebumps every time—exactly what all the best Fat albums do.

Man, can Dave Hause write songs. Here, he absolutely nails melodic punk with a collection of songs that seemed to somehow sum up every listener’s life at the time it came out, an uncanny knack not often found in punk. Plus, catchy choruses, and a vocal style that you just can't help but love. This may seem like a simple rock album, but it's deceptively powerful.

The Longest Line proved that NOFX are damn good at EPs, and it's a legendary Fat release, but The Decline was the EP that made everyone stand up and take notice. You could hear the sound of punks worldwide all saying at once, “Maybe we should take NOFX seriously after all” when this dropped. Plus, a conceptual disc with one really long song that doesn't suck and is actually fun to listen to? Now that's punk.

No Use For A Name's early material was good; with this album they became great. Tony Sly's songwriting has become the stuff of pop-punk legend, and while he became more mature on albums after this, it was during the Leche Con Carne era that everyone started to realize this band was something special. Their approach was typical of Cali pop-punk of the time, but the album always hit a bit harder than most, and in the heart, not the face.

One of pop-punk's most head-scratching stories, Face To Face may have gone through more than a few stylistic shifts in their day, and none really worked except for this one, where they did melodic pop-punk so well it was almost… formulaic? Sure. Incredibly touching and moving? Absolutely. It's easy to dismiss their emotion as contrived. All things considered, I say it makes perfect sense as this band never really seemed sure of themselves, and that feeling of insecurity fueled what ended up being a very honest punk album.

5. Good Riddance – For God And Country

You're probably disagreeing with my choice of Good Riddance albums, as the band no doubt got tighter, more streamlined and heavier after this debut. Like many of their Fat peers, they're wildly consistent, but on For God And Country they had less hardcore and more of a California pop-punk sound at points, and combined with those melodi-snarl vocals of Russ Rankin, it was a combo that hit the spot so perfectly at the time. Songs like “Lisa” and “Mother Superior” ruled then, rule now.

Strung Out have put out tons of great records, and quite a few could have made the cut. I'll go with their second because it was so undeniably fun, the band improving greatly upon their debut, nailing down more concise and speedy metal riffing but also conveying more emotions with impactful vocals. Like Lagwagon, these guys continue to kill it, and you'd be just as wise starting with their most recent album, but for the time-and-place factor, you can't beat Suburban Teenage Wasteland Blues.

3. Against Me! – Searching For A Former Clarity

Against Me!'s sprawling, underrated epic: 48 minutes is loooong for a punk album, and while a couple of these songs could probably be eliminated for a more hard-hitting disc, Searching For A Former Clarity has received so many spins around these parts over the years it's absurd. Featuring some of the band's most intriguing work, as well as some of their most hard-hitting, it's a huge, up-and-down ride well worth taking, and showed how both the band, and the label, were continuing to evolve.

Trashed is a very close second choice for this list’s sole Lagwagon album (see the rules above), but Hoss found the Cali skate punks toning down the metal riffs and beefing up the simple pop structures, and it was a winning formula. Some of the band's most touching (and most memorable) material is on here. The sound of pure chemistry, Hoss features a band maybe not quite at their prime (they continue to put out excellent records to this day) but most certainly at an exciting transition period between youthful energy and a more matured approach. It's just a thrilling album to listen to: a bit constrained and restrained, but never weak, Hoss still sounds amazing today.

Not just the greatest Fat album ever, but the greatest punk album ever.  Potemkin City Limits is pure feeling. The feelings ain't always pretty (actually, they pretty much never are, to an uncomfortable degree), but that's what makes it so great. The music might have been a bit too metal-tinged for those craving material closer to the band's pop-punk roots, but there's a reason that this album makes every muscle in my body tense up every time. It's a perfect punk album, with not a single second of its 42 minutes wasted. It’s the sound of a strange—and strained—time, between the band and the label that carried them:The fact that the best Fat Wreck Chords album of all time has a song on it calling out Fat Wreck Chords' Fat Mike's business ethics is a twisted sort of proof that it gets no more punk than this.