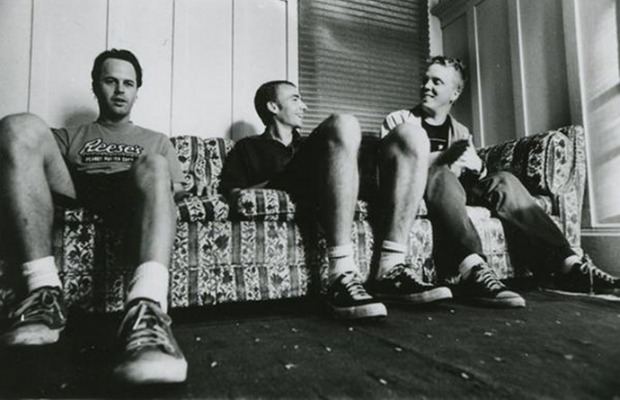 Jawbreaker are one of the most influential punk rock bands of all time, and some of the first purveyors of emo’s early ’90s reinvention, which is amazing considering they only put out four albums. But here's the thing: Their songs are life-changers, completely re-working what punk was capable of doing through a deceptively simple guise, be it their early pop-punk material or their later slick-rock, major-label era. Here are their 10 best songs.

Jawbreaker's first album, Unfun, only hints at the genius to come, and “Busy” isn't brilliant. The tune's simple punk could have been played by any number of Bay Area bands of the time. But it's earnest, sincere and within its lyrics and guitar work lie suggestions of what's to come. It's the band at their feel-good best, and considering all the great, meaty misery they left us to commiserate with, it's nice to balance that with something positive. “Busy” excels at lifting you up in a way the band rarely did again.

This track from Lookout! Records Punk USA compilation perfectly sums up the band's strengths during the 24 Hour Revenge Therapy era: brooding songs that build and explode into celebrations that offer catharsis after ennui. But “Sea Foam Green” had something extra––an incredible structure that proved the band's songwriting skills were evolving beyond your average scrappy Gilman Street pop-punk band.

The band's fourth and final album, Dear You, was hotly contested amongst punks when it came out to an embarrassing degree (hey, if nothing else, we care about our bands). Love it or not, “Accident Prone” showcases dynamics that annihilate: the song builds up to a huge peak that, when playing in the background, might just pester or annoy. But when given your full attention on headphones, it's one of the most satisfying moments of glorious despair in punk history.

Every Jawbreaker fan loves “Chesterfield King,” and for good reason: The song sticks out on the oft-miserable Bivouac as being both amazingly tender and surprisingly upbeat. It's a feel-good love song set to melodic punk rock, with a vocal pattern that barely lets up throughout the whole thing. There's even a guitar solo…almost? What's not to love? By the time the final verse bops up, it becomes clear that this is one of the great punk love songs of all time.

It's absurd and pretty embarrassing to quote Jawbreaker lyrics. At their best, they are phenomenal in their simplicity and crushing in their poetics. Tossing off a line here or there in a list or review doesn't do it justice, so I'll keep it to a minimum (this seems like as good a time as any to remind you of the absurdly cutting couplet “Stick a fork in a socket/have sex alone”); I'll instead urge every one of you to listen to this song, read along with the lyrics, and understand what it is to feel pure emotion through music.

The first Jawbreaker song I fell in love with, and it still hits hard all these years later. Never has the mixture of a sad verse and a happy chorus mixed together so well, a glorious melancholy delivered with a shrugged shoulder and a sympathetic smile. The best happy-sad/sad-happy punk song of all time.

Jawbreaker were at their most powerful when they were playing through their bad moods; “Jet Black” was an almost unbearable example of this. How anyone manages to sing “I am jet black/I am stone cold” without sounding cliché is beyond me. But here the words are delivered with an emotional flatline that only adds to the overwhelming feeling that, yeah, maybe things weren't going so great for these guys despite the major-label deal and all. One of those rare songs that actually makes me think “uh-oh” when it comes on.

Jawbreaker always excelled at great opening lines, and this one (“Sleeping off the last five years/takes another five”) has haunted everyone who has ever heard this song, which closes 24 Hour Revenge Therapy the only way that an (amazing, amazing) album could be closed off: with a feeling that finding the poetry in despair just might offer some hope, and with a helping hand offered that is shaking from its own damage.

One of two songs here that never made it on to a full-length, “Kiss The Bottle” is nevertheless regarded with much respect from Jawbreaker fans. The song, a spiritual companion to “Chesterfield King,” is musically upbeat but lyrically struggling to see the good through the bad. The song's chorus comes through loud and clear despite muddy production and an agonizing, beautiful, pre-throat-surgery vocal performance from Blake Schwarzenbach. This song really is the band at their achingly finest hour.

If you were to sit down and listen to all the Jawbreaker albums in chronological order (which I highly recommend), you would realize that “Condition Oakland,” located just before the halfway mark of their third album, is the precise moment they hit sheer brilliance. The song (which is perfect, by the way) rocks hard and a bit weird for the verse, melancholy for the chorus, and then takes a sudden shift with a long and slow build-up that fades out just a bit too soon every single time, leaving the listener with an appropriate sense of longing as the silence hits.