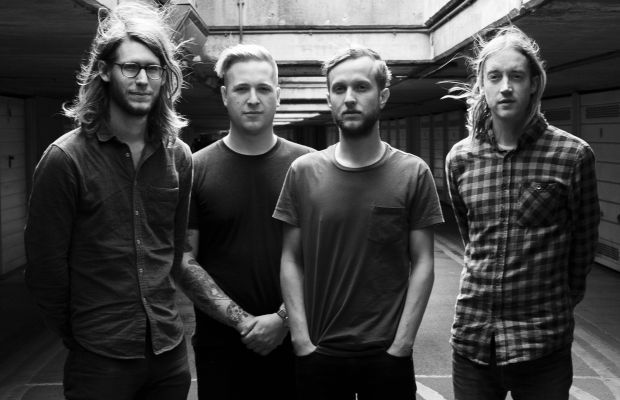 Ever since they burst onto the scene with the 2008 full-length debut Somewhere At The Bottom Of The River Between Vega And Altair, Michigan’s La Dispute have been at the forefront of modern post-hardcore. With the poetic, storytelling lyrics of Jordan Dreyer backed by the tight musicianship of Chad Sterenberg, Kevin Whittemore, Adam Vass and Brad Vander Lugt, La Dispute have carved a unique niche for themselves in modern music and produced three magnificent albums—including APMA Album Of The Year nominee Rooms Of The House—and a number of quality splits and EPs. Here are their 10 best songs from that impressive discography.

This song from the debut Vancouver EP is almost entirely instrumental, making it an oddity for La Dispute. After three minutes of Thrice-like heavy post-hardcore, Dreyer appears, with his voice cracking and raw, raving like a madman for the final 100 seconds. He hadn’t quite developed enough vocal force yet, but it’s a great look into the band’s early potential.

La Dispute softened their sound quite a bit for Rooms Of The House. This more subtle approach led to some beautiful songs, including this closer, which is reminiscent of the spoken word on their Here, Hear EPs. The nostalgic, melancholy vibe and lush guitar-playing make this a standout for its quality as well as its quietness.

La Dispute have strong ties to their home state, and this track from Wildlife shows how personal it is to them. Dreyer paints a vivid picture of Michigan’s economic despair, but the reason his “boring, desperate city” resonates so much is because of how clear it is that he takes its problems personally.

Rooms Of The House tells stories of a crumbling relationship in a number of ways, but none are as blunt as this lead single, a simple, mid-paced rocker that wouldn’t be out of place in the grunge era. What it lacks in twisting guitars and complex meter, it makes up for in brute force with its power chord crunch.

6. “Bury Your Flame” (Somewhere At The Bottom Of The River Between Vega And Altair, 2008)

If there’s one La Dispute song that demands air guitar, it’s this one from Somewhere At The Bottom Of The River. Sterenberg and Whittemore play furious interlocking licks, complementing one of Dreyer’s most intense performances on the album. A classic hardcore outro ties it all together.

This slow burner from Wildlife tells one of the heaviest harrowing tales on that album. It’s the story of a man whose schizophrenic son stabbed him repeatedly, delivered as always by Dreyer’s stirring narration, which becomes more and more intense as the story devolves into madness.

The better of two songs from the Searching For A Pulse/The Worth Of The World split with Touché Amoré, “Why It Scares Me” is a perfect shout-along song. The best of the four tracks from either band on the split, it’s been a live staple ever since its release for a reason.

3. “Said The King To The River” (Somewhere At The Bottom Of The River Between Vega And Altair, 2008)

A signature tune from Somewhere At The Bottom Of The River, Dreyer packs as many words into these four raging minutes as some lyricists do into entire albums. One of the most aggressive songs that La Dispute have ever written, it’s an intense listen that demands your attention.

2. “The Last Lost Continent” (Somewhere At The Bottom Of The River Between Vega And Altair, 2008)

Not many post-hardcore bands would have the audacity to put a 12-minute track on their debut album, but few bands are as ambitious as La Dispute. “The Last Lost Continent” builds and builds throughout its run time, each section more relentlessly intense than the last, and the chanting finale is one of the highlights of the band’s career.

The long centerpiece of Wildlife encapsulates everything that makes that album (and La Dispute) so great—beautiful storytelling, loud-quiet dynamics and an intense emotional climax. Dreyer’s narrator witnesses a drive-by shooting that accidentally takes the life of a young boy and then watches the fallout as the shooter holes up in a hotel room and contemplates evening things out via suicide. The cry of “Can I still get to into heaven if I kill myself?” causes goosebumps every time.