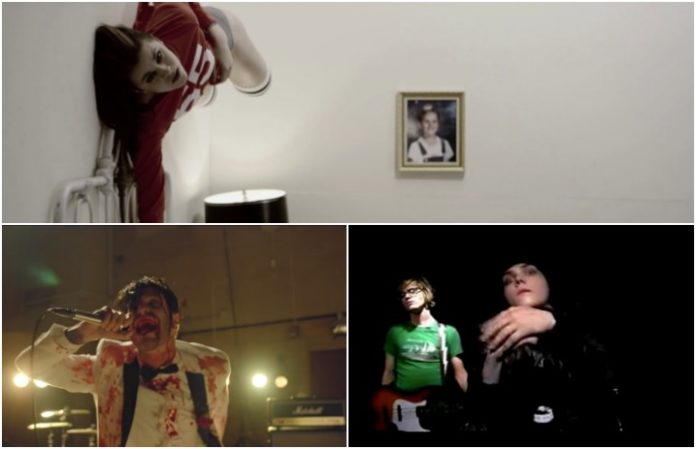 Halloween is still several months away, but the scene is always ready for a little horror. From the critical success of Michael Jackson’s werewolf-filled “Thriller” to Kanye West’s American Psycho-inspired “Love Lockdown,” music videos have been drawing inspiration from scary movies since their inception. Here are some of the best music videos based on some of our favorite thrillers, slashers and old school horror films.

“The Kill” by Thirty Seconds To Mars

From abandoned hotels with endless hallways to eerie figures lurking in bathrooms, “The Kill” looks like a modern-day adaptation of the 1980 film The Shining, based on Stephen King’s novel of the same name. Just make sure no one goes into room 237.

“Everlong” is one of Foo Fighters’ most critically successful songs, but ironically, the video for the track is based off a film that could have easily flopped. The low budget 1981 film The Evil Dead takes horror to a camp-filled level that turned the movie into both a cult favorite and massive franchise.

“The Universal” by Blur

Set in the Korova Milk Bar, “The Universal” draws directly from the opening scene of Stanley Kubrick’s acclaimed thriller A Clockwork Orange. Dressed in all white, the British band portray the fiendish droogs performing at their favorite drug-filled milk bar.


Ice Nine Kills make it on this list twice with tracks from their latest album, Every Trick In The Book. Sampling a real exorcism for “Communion Of The Cursed,” the band venture into the world of the 1973 film The Exorcist and then recreate scenes from Stephen King’s bestselling novel-turned-film Carrie for “Hell In The Hallways.”

The lighting alone in PVRIS’ music video for “White Noise” is enough to creep you out, but when vocalist Lynn Gunn gets ripped from her bed and plastered to a wall, your skin is sure to crawl. If anyone wasn’t sure that this video was based off Poltergeist, look closely and you’ll see the band’s mirror logo turn into the TV from the 1982 thriller.

Rob Zombie makes scary movies for a living, so it’s no wonder he would adapt one of his music videos into one of his favorite films. Alongside his wife, Sheri Moon, he recreates scenes from The Cabinet Of Dr. Caligari, a 1920 silent film that fits Zombie’s visual aesthetic perfectly.

“Paranoia” by A Day To Remember

Though not necessarily based on the film, the music video for “Paranoia” bears a remarkable resemblance to many of the scenes from It Follows. Chased by a monster that can—and will—find you anywhere, the band get stalked beneath parking lots and highway overpasses, just like many of the characters in the 2014 horror flick.