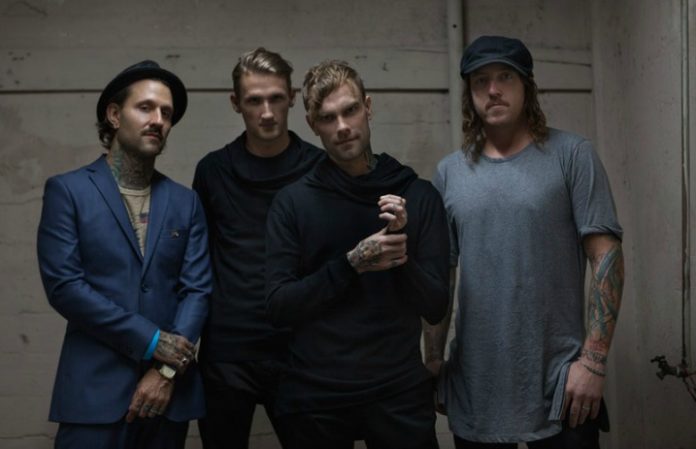 Last month, the Used recorded a live album at The Palace Theater in Los Angeles. Fans who were unable to attend will have a chance to watch the band perform with a string quartet, harpist, piano player, percussion and gospel choir on their CD/DVD set The Used: Live & Acoustic At The Palace which is set to be released April 1. Fans can pre-order the album now.

About Live And Acoustic At The Palace, lead singer Bert McCracken says, “I think we really captured the night perfectly—listening back to the mixes it reminded me how music can allow us to be children once again and once you open yourself up to that emotion it's like a virus, it's contagious.” He continues, “Nearly every eye in the venue was weepy the night we played with the orchestra because these songs are so emotional and this recording is a truly special thing that I can't wait for everyone to hear. It still gives me goose bumps.” Bassist Jeph Howard says, “Most of the songs we haven’t played in years. We’ve never played as a full band acoustic before. So, this is going to be a really special—don't miss out on this thing.”

As if that wasn't enough, the band will be embarking on an anniversary tour April 5—a two-night per city event with the band playing their self-titled LP in its entirety on each first night and In Love and Death in its entirety on each second night. With each online ticket purchase, fans will get a digital copy of the band’s Live And Acoustic At The Palace. Tickets will be available this Friday, November 20. Howard goes on to say, “It’s pretty cool for anybody who’s a Used fan and liked the first two records. This is stuff that we haven’t played in like 15 years. Some of these songs, before we got signed, we were touring [with just] our first record and then once we got signed, we re-recorded it. Some of the songs we played only until the first record was done and then we started the second record, we didn’t play some of those first record songs anymore. So, these songs haven’t been played since however long that's been. It’s going to be pretty special to see these songs live, probably for the first time for a lot of people.”

Check out full tour dates and a tracklisting below.