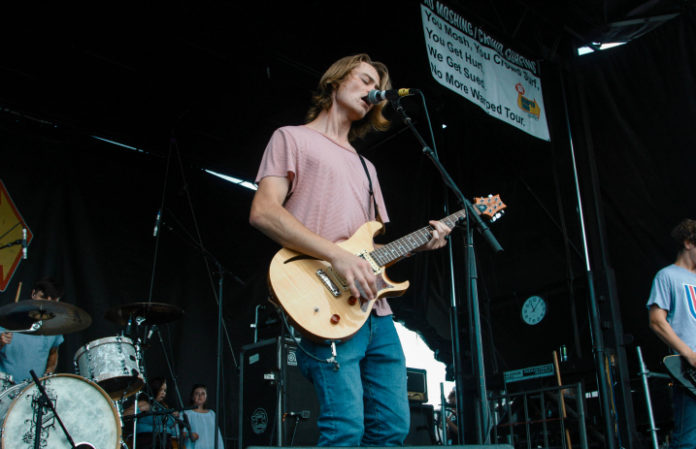 The sun has set, the dust has settled and the bandwagons have been returned. After finishing up this year’s Vans Warped Tour, there are only a few matters left to attend to before the ledger can be closed on the summer of 2016. That’s right: We have been granted the privilege of announcing this year’s Ernie Ball: PLAY Warped winner—the Weekend Classic.

“It is a long, hot summer, and to stand out in Chad [Gilbert]’s mind, which probably had turned to mush by this point, is a band we all need to know,” Warped founder Kevin Lyman says. “We truly appreciate Ernie Ball and all the support they have given through the years to emerging artists. PLAY Warped was the latest incarnation of this support and was warmly received by the artists and fans alike.”

Longtime supporters of unsigned bands from basements to main stages, Ernie Ball’s recently launched PLAY Warped Tour program (formerly Battle Of The Bands) granted the opportunity for 41 local, unsigned bands (chosen from over 11,000 entries) to play the tour this year. This is the 20th year Ernie Ball has run the unsigned band program with Warped. Of all those young rockers, Lyman and New Found Glory guitarist Chad Gilbert chose the Weekend Classic as the grand-prize winners because of their crass, yet heartfelt three-part vocals and brain-tickling riffs. The band will be cashing in on a prize package valued over $50,000 which includes a three-song EP produced by Gilbert, a mentoring session with Lyman, Gilbert and Hopeless Records, $10,000 in cash, $10,000 in Guitar Center credits, $500 to Journeys and a ton of sweet gear.

“If you follow New Found Glory through our career, we’ve always been a band that likes talking about other bands and taking younger bands on tour, and whenever we’re in some sort of spotlight we try to pull up other people with us,” says Gilbert. “So this was cool, it seemed like a good fit. Ernie Ball thought of me, which was awesome.They put a good program together. It’s a good opportunity that costs a lot of money, and it’s really cool that they invest in younger bands..”

“There were a lot of great bands that I watched, a bunch of different styles, every day was a nice surprise,” Gilbert continues. “I had about 10 or 11 bands that I narrowed it down to. It’s really hard because when you watch a band live on Warped tour, they only get 25 minutes. They don’t have time to do any sort of soundchecking, they don’t have sound guys and it’s an outdoor festival.”

Yet one collective noise proved to ring out louder than the rest. The Weekend Classic, hailing from the small town of Madison, Indiana, could easily be the next big thing. The band—Chris Webster (lead vocals, guitar), Ryan Wells (guitar, vocals), Christian Richards (drums) and Matt White (bass, vocals)—are young and they are ready to work, as Gilbert says they’re “hungry.”

“‘Hungry’ in a sense that when New Found Glory were doing our signing all of them came over and introduced themselves and they were really psyched. Their excitement level was really high, but the main reason they won for me was their songs. I really like bands that you can hear their influences, but you can’t fully pin it on one thing. When I heard the Weekend Classic songs, some of the riffs sound like alternative riffs, but then there’s some vocal melodies that remind me of like Deja Entendu Brand New era, then some other parts that [made me think], ‘I’m sure these guys listen to the Story So Far.’ There’s all these different elements in them that I think is cool because when you blend that together, you have a band that can tour with anyone.” Gilbert says he’s looking forward to seeing how he can help them in the studio, while protecting and curating the sound they have worked so hard to cultivate. “Knowing where I came from, growing up in the punk and hardcore scene then going to working with a big producer, I think I’m a good fit for them,” he says.

The contest win is straight out of left field, so to speak, for the boys. “I did not expect this coming and the way that Chad played it off in telling us was pretty epic, too. He told us we smelled like shit and that’s why we won,” says drummer Christian Richards.

The band are currently working with producer Seth Henderson (Real Friends, Knuckle Puck) on an EP due out this month called When You Had Nothing and they have plans to go back in the studio to record six more songs in early November.

“All three of the guitar players sing and all have their own sound so we can do a lot with that. Chad said it best the other day,” Richards says. “We have so many different influences. We literally listen to everything from Led Zeppelin to pop bands—we have a wide variety of music we take inspiration from.”

Ahead of the new EP, the Weekend Classic released one of the songs as a single. “Tethered” features a guest vocal spot by Joe Taylor of Knuckle Puck who serendipitously was on hand for the band’s performance at Warped. “We had no idea he was coming out to sing with us,” says Richards, laughing. “We played right before Real Friends, [Taylor] was going up there to talk to Dan and, we were playing ‘Tethered’ and he’s like, ‘Oh shit, I think I remember how it goes,’ and just ran up there.”

As for the prize money, the Weekend Classic are going to try and make it last, after an initial present to themselves of course.“Definitely a van,” says Richards. “We’re going to think it through and spend it wisely, put some back for emergencies, but really just set ourselves up to be able to tour 200 days out of the year, which is our main goal for next year.”

They’re aiming for a record deal and Richards hopes that this prize will help them get closer to that goal. Get in on the ground floor, people: The Weekend Classic are gearing up, both figuratively and literally, to make themselves heard. “We already have planned to record nine songs at this point between the EP and songs with Chad and we’re already starting to put tours together for the end of January into February, then on to spring and summer,” Richards says. “So there’s no turning back now.”