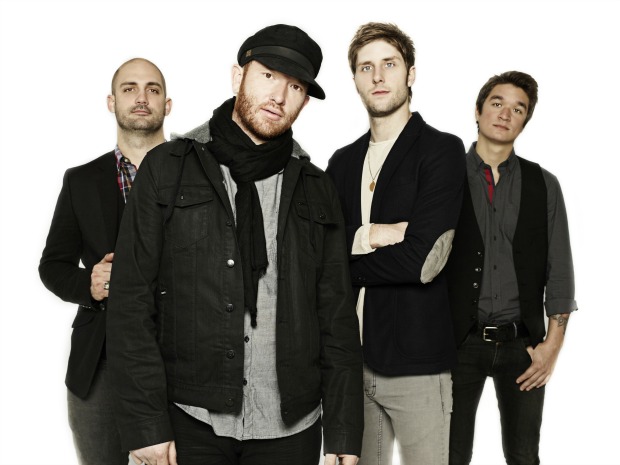 Formed after guitarist/vocalist Jason Lancaster left Mayday Parade, Florida rock band GO RADIO hit the ground running, with a record deal in one hand and plenty of buzz thanks to Lancaster’s history in the other. Two EPs and two full-lengths followed, including last year’s well-received Close The Distance, but earlier this week, the band’s fanbase was shocked when Go Radio announced their breakup seemingly out of the blue. While the statement issued on the band’s behalf read as amicable, frontman Jason Lancaster has taken to the offensive, most recently issuing a long blog post discrediting remarks being thrown his way—though quizzically not actually identifying exactly who was discrediting him. We caught up with guitarist ALEX REED and drummer STEVEN KOPACZ to try and get to the bottom of this, as well as see what the future holds for them.

People were surprised by the abruptness of Go Radio’s breakup announcement—it was kind of left field. Could you talk about what it was that brought this decision to light so quickly?
ALEX REED: It’s something that the four of us have known was gonna happen or a little while now. Like we said in the statement, Jason came to us—he had been going back and forth with touring—I think he was getting burnt out from being on the road and doing smaller club tours, so he came to us and told us that he had hit a wall; he was getting older; he wanted to kind of move on and settle down. In that situation, we obviously as a band didn’t want it to end by any means. But in talking to him, he seemed pretty certain of his decision, so we agreed to finish the commitments that we had—which were the rest of the tour we were on at the time and Warped Tour. It became pretty apparent towards the end of Warped Tour that it was probably going to be the last tour. We had thrown around the idea of maybe playing a farewell tour or a farewell show but decisions had already started being made towards the end of Warped Tour. We would end it while we were on top at the mainstage on Warped Tour and really go out with a bang. It was one of the biggest crowds we’ve ever played in front of.

You said the genesis of the whole breakup started on the tour before Warped Tour, when you were out with the Summer Set, so this dates back almost eight months. Were you surprised when Jason first brought up the idea of leaving the band? Did you see it coming?
STEVEN KOPACZ: It was a little surprising. We weren’t on a bus so we were in really tight quarters. [Jason] likes to have his own space and stuff. It was a little bit of a surprise to us that he had made his mind up, which he indicated in his demeanor. When we had the conversation, we were like, “So, I guess your mind’s made up? It doesn’t seem like anything we would say could change your mind.” So it was a little bit of a surprise, but when you’re on tour, you can kind of tell—through demeanor and personality—when someone’s not into it as much someone else is.

REED: That’s definitely how I felt. I was pretty surprised by it, but in looking back, I can see that he was kind of distant. He had always liked his personal space, but he was more distant than ever in the weeks prior to the breakup. If I look back on it, it is something I maybe could’ve seen, but when you’re in it; you don’t really realize as much of what’s happening until you have the outside perspective.

How difficult was it to not tell people, while you were on Warped Tour, that this was going to be it?
REED: That was a difficult thing to keep in for everybody, including Jason. We wanted support to go out the right way. We didn’t want people to come to Warped Tour and see us as a sad thing. We wanted people to come out the right way, under our terms, and not be this massive rumor mill of things. We wanted to play these shows with full energy and in a positive way. It’s not lying, but it’s hard when people ask when we’re coming back around and we say, “We’re not really sure yet.” At first, there was still a lingering possibility of a final show, but as we went forward it just seemed like the right time to cut it off was after Warped Tour. We had to keep it from our friends and family for a long time because the music industry is big, but it’s also very small. As soon as one small group of people knows, it’s hard not to talk about it. So, we kept it between the four of us, and a couple of other people who we really trusted, to let us be the ones who share it with the world.

Jason recently did an interview with the Gunz Show and said that there were things in the statement released by the band that were not true. But he also said that there was no bad blood in the band? Do you have any insight as to what he thinks you are saying that’s not true?
REED: That’s a tough one. I did hear that he had an interview with the Gunz Show, but I didn’t have a chance to hear it. That is interesting. I think we were very delicate with the statement to not create any bad blood. Only a very small snippet of the statement has anything to do with what Jason did or didn’t do. We were never trying to be malicious or anything. We always just said that we wanted to be open and honest with people, without divulging too much personal information. It’s not about what he said or she said. This is honestly where the core of it came from when he came and told us. He had recently gotten married and things weren’t going the way he had seen them going for Go Radio in this record cycle. The gist of it that he told us was that he had gotten married and he wanted to spend that time. You know, I don’t know the inner workings of their marriage too much. He lives in Orlando; she lives with him, but when he came to us, he said that it was his decision. He said he was tired; he wanted to be able to have a house and a more consistent money flow. It seemed like he had a certain longing for the next step in adulthood and that maybe he was being held back from that by touring all the time. That was the core of why he wanted to leave the band. He was longing for the next chapter in his life. I used that very word, “chapter,” [in the statement] because that’s what it is. It’s the end of a chapter, but we’re all going on to do different stuff. It’s hard to interpret because maybe he meant something different—to the three of us. Maybe he meant to convey something differently, but all three of us were under that understanding.

KOPACZ: I’m definitely on the same page with everything that Alex said. We had the initial conversation in the hotel room, on the Summer Set tour. Jason was like, “Hey, can I talk to you guys?” At that point, we could have been very angry with him because it was unfair to us; there were still three other people involved. [But] we weren’t angry at him in any sense. We were never angry—maybe disappointed because the band was coming to an end. But we understood his decision. That’s why when we wrote up the statement, we tried to keep it as vague as possible but with also telling a side of the story instead just being like, “Go Radio broke up.” We wanted to make sure that the story was out there without pointing any fingers. Like Jason said, there’s no bad blood. There never was any bad blood, but we wanted people to know a little bit of the reasoning without making it seem like there was any bad blood. Like Alex said, I haven’t heard the Gunz Show interview either, so it’s kind of strange that he would say something like that. The little blurb about Jason in the statement we made is so small, but it is true. It’s exactly what happened. So, I’m kind of caught of guard with his “it’s not true” statement because that makes no sense to me. >>>