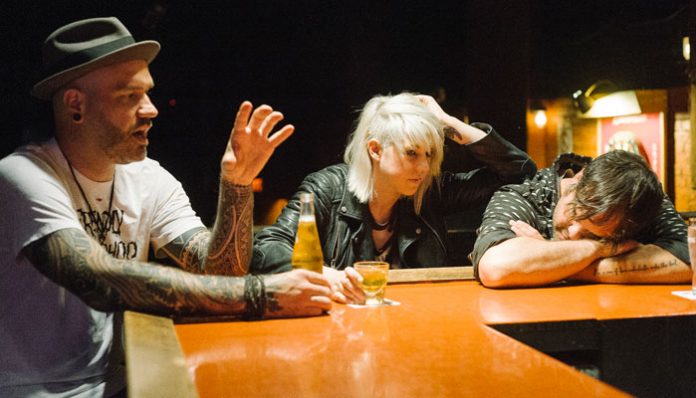 Your quarantine is about to get a whole lot louder. Today AltPress is premiering the video for “Blacksheepish,” the new track from turbo-charged grunge-punk outfit theWorst. The Portland, Maine, trio are fronted by lead singer Brooke Binion, who comes off as the glorious love child of Joan Jett and Kurt Cobain. Fueled by the best musical elements of generations past and future, theWorst are bringing it hard.

For as wild as it is, “Blacksheepish” is also a poignant gesture to a fallen friend. Binion wrote the song in tribute to her friend Brittany Goldych, who passed in 2017. “This is a video for a song I wrote about my feelings of a great friend’s suicide and how I didn’t see it coming,” Binion says. “Her and I worked at a punk club together, and when she got to work, she’d always throw Hole and Sonic Youth in the jukebox. She was at almost every local show with theWorst, and if you look hard enough in the video, there’s a still shot of her in the front row.” Binion took the sadness of her friend’s death and used it to conquer her decade-long heroin addiction.

The song is the first glimpse of theWorst’s next album, the follow-up to 2017’s Jane Doe Embryo. Powered by a post-grunge urgency and third-wave feminism, theWorst are bringing both sweat and awareness into our realm. If this were 1993, Binion, bassist Will Bradford (SeepeopleS) and drummer Benbazi (formerly of Beatnik JR) would’ve seared into the ’90s consciousness of Generation X. TheWorst’s charging power focus is precisely what we need right now in these truly interesting times. And “Blacksheepish” conveys a great amped-up catharsis coming out of great sadness.

The coronavirus pandemic has sidelined live music for the time being. With “Blacksheepish,” theWorst have given us a promise of how electric things will be. Once they finish their record, they will be out on the road with a vengeance. AltPress caught up with Binion regarding her band’s next moves for world domination.

What three bands will all the members agree to have playing in the van while on tour? And how does that manifest in the band’s music?

Early albums by the Verve. Other than that, we can’t agree on anything, so we just listen to albums by bands we play with on tour. Lately, Spillers, Bumbling Woohas and Weakened Friends‘ albums got great rotation in the van.  Aside from rare moments of agreement, we generally bring all of these disputes and arguments to the music, which manifests itself onstage in some sort of way.

As artists, how do you think the pandemic will affect theWorst? We doubt you will become an acoustic trio, but what has the time apart done for your art and your conviction?

We are very much a live band, so obviously we are hoping to get on the road soon. But it’s been great to have extra time to work on the new record. We didn’t need a pandemic
to realize how much we love and miss playing live. So not much has changed other than dying even harder to get back out there, which we plan to do as soon as possible.  Also, spending time working on songs is never a bad thing.

What was the most stunning (good/bad) thing you ever heard about your band? How did you feel about it?

After returning from rehab and when I first started playing shows sober, people started saying how much better we sounded. I didn’t hear a difference at first, and it took a while to adapt to that. Initially I thought the shows lacked energy, but eventually I realized that was just in my head. I had to bring the energy from somewhere real. I feel great now, knowing I have control over this energy and hearing things like that helped me get a good perspective.

What are the band’s next plans regarding completing the new album and taking things on the road? We’re obviously waiting for the all-clear, but what plans were in place prior to the pandemic taking hold?

Tour plans haven’t changed much aside from when we will get to do our album release tour. As far as completing the album, we have had to streamline ways to record remotely at our home in conjunction with Will Holland at Chillhouse Studios in Boston.  It’s been a challenge, but its been great to experiment with new processes. Luckily, we have a pretty solid setup at home, so its been a blast. Although we absolutely can’t wait to get back into the studio with Will Holland, who is like a fourth band member to us.
Check out “Blacksheepish” below.