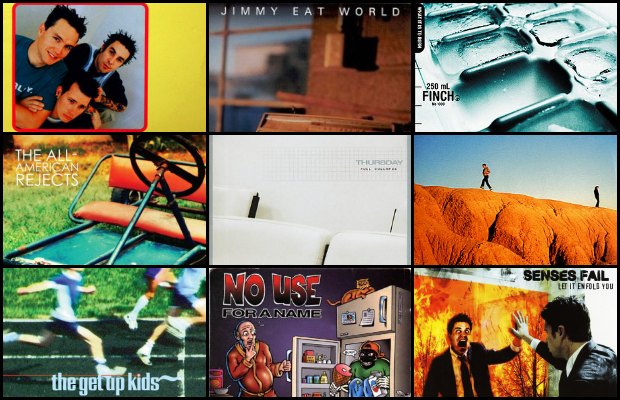 For everything there is a catalyst—that initial spark that tells ignites your curiosity and makes you want to explore further. For most of us, there was that one song or band in the late '90s or early '00s that brought us to the scene as we know it. When the AP contributors got together to share our own, we found we had more in common than we thought. Which songs introduced you to the scene?

I was a bit of a late bloomer when it comes to getting into this music scene. It took me until the ripe old age of 14 to really dive into music beyond the realms of pop radio. It all started where many music stories used to start: MTV. Whenever a show ended, they would play a snippet of a current music video while the credits rolled. I don’t remember what show I was watching, but I do remember the video they played at the end: “Swing, Swing” by an up-and-coming band called the All-American Rejects. I only heard about 20 seconds of the song, but that’s all it took. I spent the next week voraciously watching MTV for a longer look at the video and this mysterious band. Eventually I saw the entire music video. Then I heard the album. By the summer of 2003, I was completely head-over-heels for AAR, just in time for a magazine I had never heard of to put them on the cover. (You see where this story is going?) That magazine was Alternative Press. I remember asking my mom if I could use her credit card to order the issue online because I couldn’t find it at either of the bookstores in my local mall. After weeks of agonizing waiting (although it was probably only days seeing as I grew up three hours south of AP’s headquarters), the issue arrived in the mail, and my taste in music was never the same again. –Brittany Moseley

I had a couple options when it came to this playlist. I could have written about finding “What’s My Age Again?” by Blink-182 on Now That’s What I Call Music! 3 when I was 9 or about My Chemical Romance. But Nick Major is a dirty thief (see below), and I think the entire internet will call for my murder if I write about MCR one more time. So, this is the first song that led me to the heavier side of the scene’s spectrum. Its music video, which used to be on Fuse about every half-hour, showed a wildly dedicated community of fans who put their everything into this band. I couldn’t help but think, “Wow. I want to be a part of that.” Throughout high school, my best friend and I would often spontaneously start singing the instrumental parts of this song. Ah, who am I kidding? I still do that sometimes. —Cassie Whitt

I was 8 years old when I saw these three naked men [they were wearing tea-stained briefs. —legal ed.] running on a beach with a guy dressed as a banana and cute girls jumping around in bikinis. It was everything I found amusing wrapped into one music video that helped launch pop-punk to the top of the charts, got me interested in playing guitar and sparked my lifelong love and obsession of the best band out there: Blink-182. Thank you, Mark, Tom and Travis. —Nick Major

Finch ruled my life in the early ’00s after I picked up their Falling Into Place EP at a massive record store (that's now a dollar store) and downloaded What It Is To Burn via Napster (now equally obsolete). Their mix of melody and aggression was my exposure to post-hardcore, but that's changed throughout the years like a game of telephone. WIITB's title track was always the defining Finch song, strategically saved for the final slot on the album where its chorus would bring down the house. I had to see it live, and in the spring of 2003, I got my chance when they played five minutes from my house. Nate Barcalow had such an unorthodox stage presence, stumbling around like a drunken pinball. Side note: I also have to thank them for taking Snapcase on that tour and planting hardcore seeds in my head.  —Brian Kraus

My first exposure to emo came accidentally, due to discovering Jimmy Eat World via a CD sampler for Surge soda (remember that?). It contained “Seventeen” from Static Prevails, which I thought was a totally boss song, but I had no context for it. Thankfully, my sophomore year of high school, my friend Liz Panella made me a mixtape to introduce me to emo, consisting primarily of all of Braid’s and the Get Up Kids’ early singles as well as a handful of other bands. That sent me down a pretty fucking huge rabbit hole I've yet to emerge from, mailordering records and CDs from all over the world in order to find that one perfect song. The first time I found said song was when I ordered TGUK's Four Minute Mile from a Houston record label/distro called Rebound Records. I put it on my parents' living room stereo when they weren't home, turned it up loudly and marveled at just how fucking good these songs were. “Don't Hate Me,” the second track, blew me away from the first time I heard it, and made me question the purpose of commercial radio's existence, seeing as how they weren't playing what was obviously the catchiest pop-rock song of all time. Listening to that CD for the first time made me so jazzed, I started dancing around in my parents' living room—almost immediately stepping on the4MM jewel case and putting a pretty nasty crack in it. I still have that jewel case to this day; I couldn't bear to replace it. —Scott Heisel

JIMMY EAT WORLD – “For Me This Is Heaven”

The year is 1999, and middle-school me is growing ever more obsessed with the idea of playing music, yet still jamming to a mix of early-’90s alt-rock leftovers and the less-than-stellar nü-metal stylings dominating radio. An older, cooler high school friend, who always raved about “DIY shows” and rocked pink hair, invited me to watch his band practice. Before I left, enamored, he handed me two CDs, Blink-182's Enema Of The State and Jimmy Eat World's Clarity, and said, “Here, listen to these.” While I loved the pop accessibility of Enema, it was the substance and emotional rawness of Clarity, and, specifically, my favorite track “For Me This Is Heaven,” that changed my taste and my understanding of what music is capable of forever. —Philip Obenschain

NO USE FOR A NAME – “Soulmate”

Like a few million others, my first exposure to punk was through Green Day's Dookie in 1994, but I'm not gonna pretend to be Mr. Cool Guy: I was still buying Dave Matthews Band and Boyz II Men CDs at the same time I was buying the import singles for “When I Come Around” and “Longview.” It wasn't until my older brother brought home the Punk Sucks compilation on Liberation Records in 1995 that I learned about a whole world of music that existed outside the radio. That comp was my first exposure to Blink-182, Sublime, Unwritten Law, Pennywise and more, but the song that really struck a chord with me was No Use For A Name's “Soulmate,” taken from their skate-punk classic ¡Leche Con Carne!. While Green Day were probably my favorite band at the time, NUFAN became my favorite band—it felt like it was my little secret, while the rest of my friends played the Offspring's Smash for the umpteenth time. Thanks, Tony Sly, for showing me there was a world beyond the mainstream—and for writing a kickass song. —Scott Heisel

SAVES THE DAY – “At Your Funeral”

I don't remember exactly when I first heard Saves The Day's Stay What You Are, but I vividly remember its impact. As pop-punk started to boom again in the early '00s, I tended to obsess over whatever I could find, regardless of its quality. The second I heard “At Your Funeral,” one of the most memorable album openers of all time, however, I was reminded that there is real, emotional, important music at the heart of every scene. Saves The Day not only improved my taste, but prompted me to dig deeper to find artists with more to offer. —Philip Obenschain

SENSES FAIL – “Rum Is For Drinking Not For Burning”

It would be  impossible for me to pinpoint exactly which song got me into the scene; it kind of all blindsided me at once. By 2004, I was already well into bands like Something Corporate, Dashboard Confessional and Saves The Day, but it was this year that I would first get into “harder” music. Senses Fail’s “Rum Is For Drinking Not For Burning” was basically my gateway drug. “Screamo” is an acquired taste, and this song was a smooth and graceful sonic transition. The screams were light, sparse, sharp and to the point—and it was all layered into a shimmering pop-punk blitz, the likes of which my ears were already trained to love. From there, I got into harder songs on Let It Enfold You (“Irony of Dying On Your Birthday,” “Cute When You Scream”), which led me to harder pop-screamo bands (Silverstein) and then further into harder genres like metalcore and death metal. —Matt Crane

THURSDAY – “Understanding In A Car Crash”

My original choice for this list was going to be “New Rose” by the Damned, because a) I'm old, b) that track is better than anything in the Sex Pistols' catalog and c) it was the song that fired my teenage ass right up when all the lemmings in my high school were worshiping dogshit like Journey and the Eagles. Looking back though, I realized it was Thursday's “Understanding In A Car Crash” that gave me a renewed sense of hope for the underground. As the flagship band for the American post-hardcore movement, Thursday brought grace, finesse and power to a scene that had been reduced to the same five chords, calisthenic ability and physical endurance. Their hard work and vision gave young people (and at least one middle-aged music-mag editor) a sanctuary from the hordes of nü-metal opportunists dumbing down the concept of “heavy music.” The cumulative power both Thursday and Dashboard Confessional had on the Scene As We Know It™ heralded the greater sea change in American punk culture. And I am completely grateful for it. —Jason Pettigrew