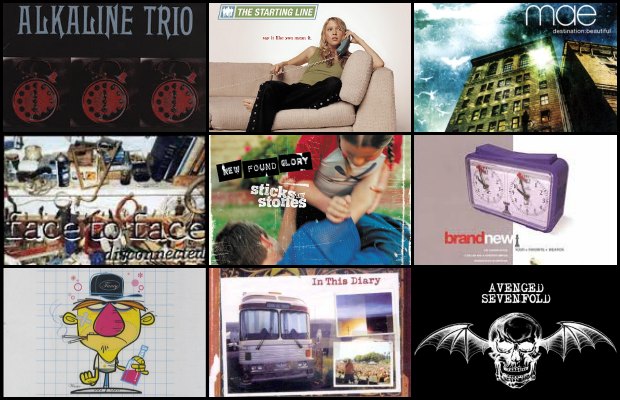 The 90-degree days have already descended upon the AP headquarters. As we sit sweating under dog breath-temperature AC and try to process that we’re going to be putting up with a few more months of this oppressive air, we thought of fonder times—when summer was still the carefree thing the movies want you to believe it is, when the memories aren’t of the heat, but of the moments.

In our inaugural Throwback Thursday playlist, we step out of the moment and into the past to examine summer with fond nostalgia.

My first car was a beat-up ’91 Plymouth Sundance, passed down to me by my brother once he went to college. It only had a tape deck inside, so I spent many an hour dubbing CDs to have something to listen to while cruising around. But for some reason, in the summer of ’99, I only owned Alkaline Trio's debut album, Goddamnit, on vinyl, so I used my parents' stereo to dub the vinyl to cassette. Little did I know, my parents' turntable was ever-so-slightly out of whack, spinning at a few revolutions faster than the prescribed 33 1/3. The result was a 33-minute record that somehow completely fit on side A of a 60-minute cassette tape, meaning every song played back faster than it was initially recorded. The result of that was me keeping that cassette in my car all summer long, singing along at the top of my lungs, learning all of the vocal melodies at least a half-step to a step above where they would be on the music staff. And the result of that was me extending my vocal range higher than I ever had before, which ended up in me landing a vocal performance scholarship at a college I applied to, which then led me to college radio, Punknews.org and, eventually, Alternative Press. So what I'm trying to say is thanks, Mom and Dad, for having a busted turntable, because had I not spent hours trying to hit Matt Skiba's super-high backing vocals in the chorus of “Message From Kathlene,” I probably would be working at Jiffy Lube or something. Yeah, that sounds about right. —Scott Heisel

THE ATARIS – “In This Diary”

While The Ataris' cover of Don Henley's “Boys Of Summer” might be the more obvious choice, another So Long, Astoria track, lead single “In This Diary,” serves as an equally fantastic summer jam. Though it may not have aged as well as some of the other songs on this list, if you were a teenager in the summer of '03, then hearing this song will inevitably transport you back to the days when “Being grown up isn't half as fun as growing up/These are the best days of our lives” felt more like a motto than a hook, and seeing a song like this break through to the TRL and radio crowd felt like a victory for pop punk kids everywhere. — Philip Obenschain

“We keep writing, talking and planning/But everything's changing,” M. Shadows screams (because he used to actually scream) on the seventh track from A7X’s sophomore effort, Waking The Fallen. “Second Heartbeat,” along with the rest of, jams with a blend of thrash and surfer rock that sounds tailor-made for hitting the beach and/or longboarding down the boardwalk—no doubt the result of the band’s SoCal origin. — Matt Crane

As much as I'd like to pretend I spent the majority of my teenage summers outdoors doing outdoorsy things, in truth I spent way too many hours on my couch binge watching TV. If you were a teenager in the early 2000s with cable, chances are you watched a lot of MTV, hence you probably saw a Blink-182 video every hour. While virtually any Blink song can qualify as a warm-weather jam, “The Rock Show” was the song of the summer in 2001. It covered all your summer essentials: hanging out doing nothing with your friends, falling in love (at least until September), being a dumb kid and, of course, Warped Tour. As with every Blink song of that time period, the chorus stayed in your head long after it was retired from MTV's rotation. — Brittany Moseley

When I think of summer songs, I usually think fast, upbeat, energetic and hopeful. Brand New's “Soco Amaretto Lime,” the closing track of their debut album, however, is none of these things. A half-nostalgic remembrance of summers, and, more importantly, feelings past, “Soco” perfectly captures the uncertainty, misplaced confidence and carefree pursuit of instant gratification that comes with trying to make the most of one's waning teenage years. An anthem for anyone who's ever fallen in love with a feeling that they never wanted to grow out of, “Soco” is something of an essential summer sendoff. —Philip Obenschain

Nothing screams summer like crusty pop-punk from the early ’90s (think bleached hair, half-pipes, cheap beer and rebellion). “Trust is something that comes easy/When you've never been a victim,” FTF singer Trever Keith muses on the (oddly) upbeat “Disconnected.” Let the track’s defiant gang vocals—“No, you don't know what you will give up!”—be the melodic anthem to your punk rock summer. — Matt Crane

LESS THAN JAKE – “The Science Of Selling Yourself Short”

One of the first bands I think of when someone says “summer” is Less Than Jake. They've been a part of my summer ever since I saw them at Warped Tour 1997, in the pouring rain in the parking lot of Chicago's United Center. Any summer that goes by where I don't see the band is a sad one at best. But out of their massive catalog, the song that resonates with summer the most for me is the second single off Anthem, “The Science Of Selling Yourself Short.” This easygoing ska number has a rad music video that I associate with the first time I ever saw MuchMusic USA (which later became Fuse), at the start of my senior year of college, right as I was trying to figure out just what the hell I wanted to do with my life. Oh, also: The way Roger sings “speeeeeending” in the second verse? Gets me every time. — Scott Heisel

One of the early indications Mae would turn up the guitars on their next album, “Summertime” chugs along before blasting chords across the chorus, a noticeable change from the other parts concerned on Destination: Beautiful, like piano playing and hush-hush vocals. On “Summertime,” it's not just small talk about the weather, it's an escape plan for two. “Windows down, we see a falling star/Stop the car/Waiting for nothing but our beating hearts, going far/Oh, the summertime.” Emo enough for ya? —Brian Kraus

MY CHEMICAL ROMANCE – “I’m Not Okay (I Promise)”

For a period following 2004’s Three Cheers For Sweet Revenge’s release, MCR frontman Gerard Way would introduce this song onstage thusly: “This song was voted the No. 1 summer jam of all fucking time.” Who are we to argue with that accolade? — Cassie Whitt

NEW FOUND GLORY – “My Friends Over You”

If you don't automatically roll down your windows (assuming you're driving) as soon as that familiar guitar intro kicks in and belt out the chorus so everyone in a 20-mile radius can hear, well then, you just haven't lived. There's nothing inherently “summery” about New Found Glory's most popular song; it's not even that happy of a song if you listen to the lyrics. Perhaps it's the message of “My Friends Over You” that makes it so perfect for those warmer months: Love comes and goes, but true friends stay forever. Or it could just be that catchy-as-hell chorus that will go down in the annals of pop-punk history. “I'd still pick my friends over you!” — Brittany Moseley

THE STARTING LINE – “The Drama Summer”

I could have picked any song from the Starting Line’s Say It Like You Mean It for this playlist, but the one with “Summer” in its title is obviously the most fitting. Still, some albums are less about summer because of their content and more because that’s the time you associate them with. “The Drama Summer” encapsulates the feeling that adventures are written within the lines of the hottest season and wear out their welcome by fall, leaving us disoriented (or “dizzy with sun stroke,” as Kenny Vasoli wrote) and praying for the cold to relieve us. — Cassie Whitt