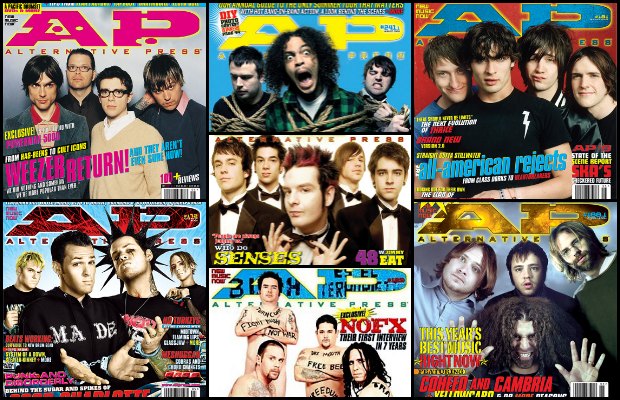 If you're reading this, we have to assume you're either an AP casual reader or subscriber. We, like you, all became fans of Alternative Press before we got the job. The editorial staff take a moment to reflect this Throwback Thursday on the first issue that introduced us to our beloved publication.

What's the first issue of AP you remember seeing?

WEEZER, AP 154
I worked at a record store in the late ’90s that had a pretty extensive magazine selection—everything from British import titles like Q, Mojo and Uncut to underground zines such as Maximumrocknroll, Hit List and Probe. So it stands to reason at some point we stocked AP, but honestly, I can't ever remember thumbing through a copy. The first time I really remember seeing an AP cover was at Warped Tour 2001 in Tinley Park, Illinois. I came across the AP booth early in the day, and noticed they had a gigantic poster of Weezer hanging up with a few bungee cords. (This was well before the sleek and well-organized AP booths you've all come to know. When AP first got on Warped Tour, our setup was pretty bare-bones.) I had never heard of AP before, but Weezer were one of my favorite bands, and I had to have that cover. Periodically, I would swing back around to the AP booth, circling my prey, waiting for the tent worker to step out for catering or a smoke break so I could rush in, free the poster from its shackles and disappear into the crowd with my newfound trophy. Alas, my then-girlfriend and I got in a fight, delaying my sure-to-be-successful plan, and when I came back one more time, the AP booth had already been struck for the day. Drat! Later that night, the girl and I broke up (in her front yard, no less; I think she threw my class ring at me, too?) Three years later, I got hired at AP, which may have never happened had I tried to steal that cover and been caught, so it all worked out in the end. I know that poster is still in our storage room somewhere, too; excuse me, I'm gonna go dig through some boxes… —Scott Heisel

GOOD CHARLOTTE, AP 172
When I used to play Little League, the other kids and I would sit around before practice looking at magazines. I was never too interested in the sports equipment magazines most of the kids were browsing through, but I do remember one time when one of the kids brought an AP magazine (issue 172), and Good Charlotte were on the cover. It was a band whose music I was very familiar with thanks to my older sister, but I didn’t know how cool they looked with their tattoos and liberty spikes. Needless to say, I was very interested in both the band and the magazine after that experience. —Nick Major

THE ALL-AMERICAN REJECTS, AP 181
If you've been following our Throwback Thursday escapades, you might recall I already told my AP origin story in our list of songs that got us into the scene. For those of you who missed it, here's a short recap: After discovering the All-American Rejects through a quick clip of their video for “Swing, Swing” on MTV, I eventually became obsessed with these cute young men from Stillwater, Oklahoma. When I found out they were on the cover of a then unheard-of-to-me magazine called Alternative Press, I immediately ordered a copy of the issue from AP's website. (But not before getting my mom's permission—and her credit card.) So what do I remember about the actual issue? I remember flipping past everything and going straight to AAR's cover story. A year or so later, I picked up the issue again and chided myself for skipping over articles about bands “I couldn't be bothered with because OMG Tyson and Nick!” That issue was packed: Motion City Soundtrack, the Kills, Brand New, Thrice, Every Time I Die and a one-star review of Metallica's St. Anger that included the wonderful phrase “Limp Bizkit rip-off.” I remember reading the cover story and being absolutely scandalized by the mention of groupies, weed and underage drinking. I quickly learned this was nothing like my G-rated copies of YM and Teen People. Shock aside, I realized something after I finished the cover story: This was a magazine that was going to make me want to invest in a band. AP was going to give me the real story, complete with anecdotes about “the bottle-blonde in a wrinkled turquoise dress” who looks like “an unmade bed.” —Brittany Moseley

COHEED AND CAMBRIA, AP 188
After looking through AP covers like flash cards for my high school Spanish tests, it's safe to say AP 188 (March 2004) was one of my first issues. I remember getting the subscription as a gift from my aunt and liking it so much that the following Christmas I made her life easy by saying “Just renew it!” Those 100 Bands issues were, and still are, a great means of discovery no matter who you are. Bands in this specific issue like New Found Glory, the Early November, Boys Night Out, the Dillinger Escape Plan and Eighteen Visions remain personal favorites to this day. I wish I could say the Disturbed cover was my first, but just as the magazine was forgetting about nu metal, so was I. —Brian Kraus

NOFX, AP 189
By 2004, my passion for pop-punk had turned into an obsession. I had attended my first Warped Tour, formed a high school punk band of my own and would check indie label sites religiously for new releases. Though I was familiar with AP, it wasn't until my love of this scene and everything surrounding it in that moment, that I made a point to pick up a copy. The first issue I distinctly remember seeing, subsequently buying and reading cover to cover, was Issue #189, which featured NOFX parodying the Dixie Chicks’ infamous nude Entertainment Weekly cover. I was instantly hooked, and was so glad to find a magazine covering everything that I loved. I haven't missed a single issue since. —Philip Obenschain

I just thought I was so cool when I first got into screamo. It was 2005, and I had probably just finished telling my friends about this rad, “obscure” band known as Senses Fail, when I decided to take refuge from the Michigan winter in the warmth of my neighborhood Barnes & Noble. As I browsed the magazine section, something shocking caught my eye: Senses Fail, my favorite “unknown” band, on the cover of a fucking magazine. Agitation quickly gave way to excitement. It was a big wake-up call: My favorite bands weren’t so small, and a real community existed around this kind of music. At the time, the band were blowing up due to the success of their debut album, Let It Enfold You, which happens to be turning 10 this year. Frontman Buddy Nielsen offers up some great reflection on this cover in the above APTV segment. “This was the style back then,” he says about the band’s look on the cover, “so I don’t want anyone getting too upset about the look. This was considered really cool—to paint your finger nails.” After reading the Senses Fail issue, AP would continue to guide my musical taste through the remainder of the decade and beyond. —Matt Crane

WARPED TOUR ’08, AP 241
The first time I was ever captivated by Alternative Press was when I came across issue 241.1. Part of our annual Warped Tour installment, issue 241.1 exposed me to music on a level I never even knew existed beforehand. I was enthralled by the seemingly endless ads for bands ranging from the likes of Solid State Records’ Underoath and Norma Jean to posters for the Soundtrack Of Your Summer Tour featuring co-headliners Boys Like Girls and Good Charlotte. The edition contained my first exposure to the hardcore genre as well, with the in-depth Oral History Of H20. As if that wasn’t already enough, pieces on Mindless Self Indulgence, Metro Station, Cute Is What We Aim For and an entire section dedicated to the 2008 Warped Tour held me over far beyond the following month when I had the next issue in my hands. Still to this day, every issue of the magazine seamlessly captures the two things I love—music and writing—and places them into a relatable perspective. —Tyler Sharp

FALL OUT BOY, AP 245.1
When I was a kid, my grandparents moved from New York City to Boston. We have taken a family vacation to visit them every year since I was 8. One year, after landing at Logan International Airport, I was walking by a Hudson News shop when the words “Fall Out Boy suck!” caught my attention. I was vaguely familiar with the name Alternative Press, but I had never actually read an issue. I wondered to myself “Why the heck would a magazine cover say that a band sucks”? Then I thought, “Whoa, that’s pretty punk rock.” I also happened to agree with the title on the cover (although my opinion of FOB has since changed). I bought myself a copy of the issue for the trip. I was hooked immediately. I spent most of that trip riding in the backseat of the car with my nose between the pages. The following month, I went to Barnes & Noble and bought issue 246. When I saw Circa Survive listed as one of AP’s most anticipated albums for the following year, I pulled out the insert and subscribed immediately. —TJ Horansky