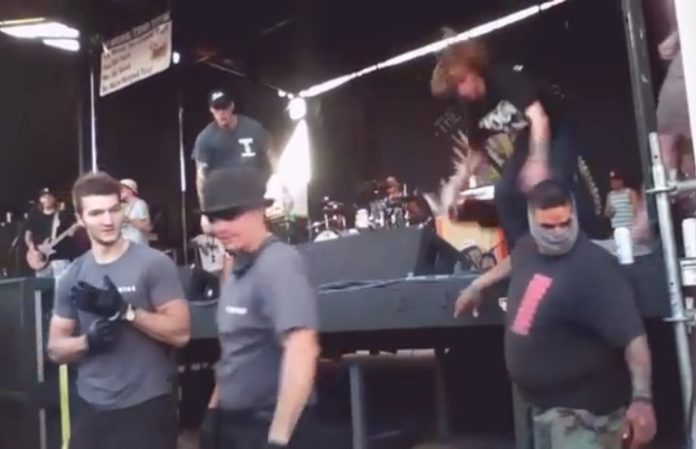 Let's get this out of the way first: We love security. Especially when it comes to crowdsurfing, they're the people that help keep us safe in some seriously intense situations.

That said… Everyone seems to have their own story of a scuffle with security. Their job is a tough one, and sometimes they don't do it correctly. That's when the band steps in.

Read more: In defense of stage diving and why it shouldn’t be banned from venues

Here are seven times that your favorite bands stood up to security on your behalf. Did we miss your favorite? Let us know in the comments!

If you don't already know, these guys' shows are absolutely insane, which means security needs to be up to task. At this Warped Tour date, however, the guards got a touch too handsy and threw a crowdsurfer to the ground, triggering reactions from a few people onstage, but especially vocalist Parker Cannon, who jumped off stage to fight.

This one actually took place at the 2017 APMAs fan day at the Rock and Roll Hall of Fame, and security there probably wasn't ready for a State Champs show. Here, bassist Ryan Scott Graham fights it out on behalf of the fans.

If you're security for a state champs show you better respect the fans cause @RyanScottGraham won't tolerate anything less pic.twitter.com/HAl84fiEyj

No security guard is prepared for a Knocked Loose crowd, but these guys weren't even trying—crowdsurfers were flying over the barricade with no one to catch them. Vocalist Bryan Garris had to drop down off stage to catch them himself.

Jenna McDougall to the rescue—security were NOT having her request to have fans come meet her on stage. Multiple security guards jumped on one fan with way too much force, and McDougall had to step in.

Security have a responsibility to step in if a fan jumps on stage because it poses a danger to the artist, but no fan deserves a full beatdown. Simple Plan brought this fan back on stage to make up for it.

On the UK leg of Neck Deep's The Peace and The Panic tour, security got rough with crowdsurfers and fans at the barricade, so the band felt the need to step in and call out their actions. First, singer Ben Barlow and guitarist Sam Bowden asking security to tone down; then, bassist Fil Thorpe-Evans being pushed off stage by one of the guards, which started a fight between guards and band members, causing the show to be cut short by the band.

SECURITY ARE PIECES OF SHIT AND NECK DEEP FUCKING DID SOMETHING THIS IS WHAT HAPPENED pic.twitter.com/Mbrb5UxpYt

7. Buddy Nielsen (Senses Fail/Speak The Truth… Even If Your Voice Shakes)

The singer jumped off stage to help handling the crowd members who had gone a little too crazy during a show in California while security just watched, according to fans who were there.

And that's all we got for you. Did we miss your favorite Band vs Security moment? Make sure to let us know in the comments.