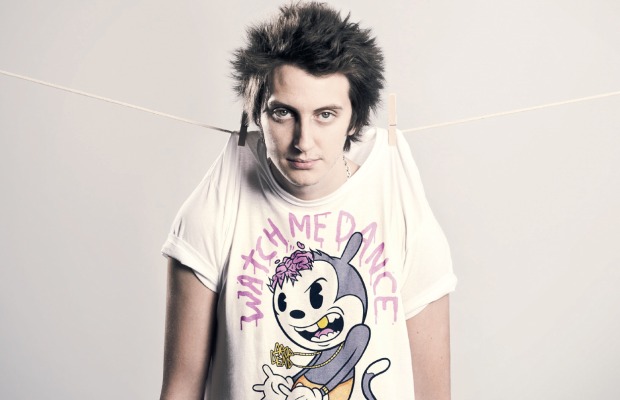 DJ-meets-heavy-music collaborations may be pretty common, but they’re nothing like what happened when Sheffield, England, musicians DJ Toddla T and Bring Me the Horizon frontman/Drop Dead Clothing honcho Oli Sykes paired up. Not to record—but to design a shirt for Toddla T’s new album, Watch Me Dance. Toddla and Oli reunite to tell us more.

Tell us a bit about the design of the Drop Dead “Watch Me Dance” shirt that’s featured on the cover of the Toddla T album.
OLI: The design was based on the name of Toddla's album and title track, so my designer Ben Normanton and I worked on a few ideas until the dancing dude came up. We wanted it to relate to the album name and show off our signature style at the same time.
TODDLA T: Each song from the album has an individual T-shirt design. The concept of the inlay is me wearing the T-shirts on a washing line!  Every shirt has a different designer, from Drop Dead to Kid Acne to Peter & Paul.

Did you work together on the concept?
TODDLA T: We bounced around ideas and feedback.  In this case, it was conceptualized face-to-face with Oli’s brother Tom, and the rest done via email due to the hectic lifestyles we live.

How did the London riots affect production of the CDs as well as the shirts?  How did the riots affect you personally?
OLI: It affected Toddla and his CD production a lot more than it did us. I was away on holiday at the time and was watching it all on the news channels. I didn't think something like that would ever happen to our country.  It’s pretty miserable.

TODDLA T: All my CD stock got burnt in the riots, delaying the release.  The T-shirts were okay, as the riots didn’t hit Sheffield, luckily.

In August, you set up a pop-up shop at Drop Dead in London that was part pre-album release party, part collaboration launch.  How did that go?
TODDLA T: The pop-up shop was great.  Drop Dead’s such a wicked store and obviously with the collab it was the only place to do it!  We had DJs and MCs passing through all day doing their thing, and by the end of the day it was more a party than a shop!

Do you see this collab growing?  Would you work together musically?
OLI:  The reason we did this collab together—apart from the fact that we both like and respect one another—is that we’re both Sheffield-based. I will always support creativity, art and Sheffield and do anything in my power to help the people with whatever I can do.

TODDLA T: Yes, I love Drop Dead and the way it does business. [It's] very humble, which is typical Sheffield, but also massively successful and ambitious—and of course, I love the clothing. I’m all about working with people I respect musically, so yeah, I’d do a tune, of course.

Oli, what do you like best about Toddla?
OLI:  It’s actually my brother, who is also called Tom, who met Toddla. They’ve known each for years; Tom skates and Toddla used to work at the local independent skate shop.  It was my brother who brought Toddla to my attention and actually came up with the idea of doing something together. Toddla’s a top lad. Very nice guy.

Toddla, what do you like best about Oli?
TODDLA T: What Oli has created—not only with his band but with Drop Dead—is very admirable. He’s done it his own way and worked with those closest to him to do it, friends and family. In many ways, he still lives the same life before his success in terms of who’s around him, and I totally respect and admire that.

What do you both like about touring the States?  Dislike?
OLI: Touring the States is awesome.  It’s crazy that you can travel across an ocean and people actually give a shit. I’d say the thing I dislike about most is the amount of time you have to spend away from girlfriends, family or dogs. But that’s the life you commit to!

TODDLA T: I’m obsessed with Buffalo wings and we can’t get them here, so I get my fix when I’m in the USA.  In fact, I get more than my fix. The only problem with that is the belly I come home with.

What is the creative community like in Sheffield?  Is it tight-knit?  Supportive?
OLI:  I’d say it’s a very creative scene with a lot of cool independent businesses running. I’d like to think were all close-knit and support each other.

TODDLA T:  Absolutely, Sheffield isn’t really split as far who’s into what music; it’s too small for that. People respect each other’s grind no matter what it is.

What has been one of the most puzzling collaborations you’ve seen in recent years?  The best or the most genius, Toddla T and Drop Dead not included?
OLI: Linkin Park and Jay-Z I didn't see coming, but that was actually pretty dope.  Does a mash-up between Slipknot and Justin Bieber count as a collab? ‘Cuz that wasn't pretty.

Finally: What is inspiring you right now?
OLI: The latest Joker track with Silas from Turboweekend. So good.
TODDLA T: Buffalo wings!

For more info on Toddla T and Watch Me Dance: www.toddlat.com.

For more info and to purchase Watch Me Dance and a limited-edition tee bundle, head to Drop Dead's webstore.