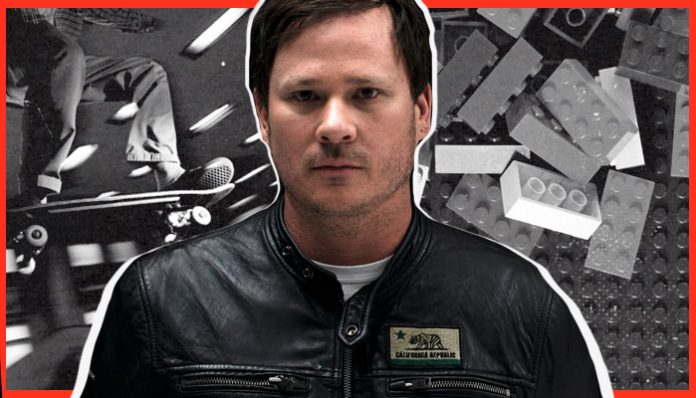 Even after leaving blink-182, Tom DeLonge never fails to disappoint us. As the leader of Angels & Airwaves, he’s continued to bring us eternal summer jams. His die-hard enthusiasm of space exploration and extraterrestrial intelligence has woken us up. (Read: We’re definitely not alone out here.) Now we’re getting personal with the singer/guitarist/thinker on punk pursuits. Namely skateboarding, punk rock and… Legos!

DeLonge chatted us up from his Southern California home where he’s laying low during the pandemic. While Tom DeLonge remains at the top of his game, he’s still held onto that goofball charm. Forget about his U.S. government security clearance and the trappings of a successful rock musician. He’s still finding meaning and joy in the abandon of skating and punk, even finding fulfillment in a complex Lego creation. Living the dream is one thing. Not walking away from it is something else. We’ll let DeLonge explain it to you…

How have you been spending your time while you’re at home?

I like to watch movies and do something with my hands. And I tend to buy these big Lego sets and build them as I watch. I don’t do it that often. But especially in the pandemic, I was trying to do a little bit more of it. And then I’ll just hand this big Star Wars spaceship off to the kiddos. “Here, you guys could do something with it.”

One of my motorcycles is this big off-road Enduro. They made it into a version of a Lego. My brother and I were way into Legos as kids, and I’ve rediscovered it over the past few years when all the kids were building them all the time. [I thought], “I want to jump in on that and build something new.” It’s something to do. I think the best one that I built was a Millennium Falcon. Like, I have a rad, sick Millennium Falcon. It’s actually sitting in my living room on a bookshelf. Like that’s a work of art. You know, you make it in rock ‘n’ roll, and you buy a Lego set to display for your friends.

Your fascination with space and alien lifeforms is well known. Do you have any personal intellectual theories about the things you’ve studied?

I have a very good reason to believe that advanced intelligent races are not just going from point A to point B. Not all of them just come from a planet to our planet. There are two opposite universes. And where we are is where they both can exist. And using frequency, you can hop back and forth. But in that other universe, time runs backward. And physics is [the] opposite. There’s an Easter egg for you.

Because I think a lot of people tend to think that “alien” means one thing. I always tell people if you’re in the ocean and you’re a fish, you see a jellyfish come by. You’re like, “OK, this place is full of that life form.” And then a dolphin comes by. Wait. OK. That too. And then a whale. And then next thing you know, a can of coke, like pollution [comes by]. You have no idea that there’s even land up above the ocean with all these humans throwing trash in the ocean. So I think when people think about aliens, they think the same thing. “So what are they like?” Well, there’s the dolphin, the Coke can. It’s teeming with life, and there’s so much more to it.

I tend to think that’s what people most commonly think of when they think of aliens. You know, the big-headed, big black eyes that you see on T-shirts and stuff. And I think that if you were going to compare the legend of those clones, you might want to look at some of the biggest pieces of art that have ever come out in humanity. Star Wars, Lord Of The Rings. Even all The Avengers movies are dealing with free-willed human beings taking on a clone army. And I think that’s something that people need to think about.

On the West Coast, skateboarding and punk rock are forever intertwined. You brought up the Enduro bikes a moment ago. Is there a thrill you get from speed? What’s the attraction?

I compare my motorcycles to skateboards. When I was younger, I got my first skateboard. That was when I felt like I could finally leave a broken family. I could finally get the fuck out of this house away from all the fighting. It was just a difficult place to be for a teenager, like so many teenagers that come from difficult family situations.

So when I got to go skateboarding, I was like, “This is my transportation.” And I just left. Every day, I left. Well, when I got my motorcycles, it felt the same way. You feel the vibration of the ground. You’ve got this thing that’s built just for the person who is supposed to be on it—it’s your own personal machine. So that feeling in your inner ear, when you’re moving fast on a skateboard or a surfboard or a roller coaster ride, you get that on a bike, too.

I remember thinking one day when I was going down the coast, “Why do I like this so much? Oh, my God. It reminds me of skateboarding. It’s not so much the tricks or being able to hang with your friends when it’s dark in a skate park or something like that. It was the ability to get up and go. And it’s your own personal machine to get you somewhere and to get you away and just to go feel the air, feel the movement. And I’ve always valued it because of that.

There’s [a] crossover with playing music. I’ll tell you this. Playing music is the biggest thing I get out of that. [Being] present is a really hard thing for me. Being onstage and sex are the only two times I can focus well. [Laughs.] “This moment is actually really cool, you know?” But all the other times I’m worried about so much stuff. I have so many responsibilities, my company or my family and whatever. But I enjoy anything that can put me in the present. And it’s really hard to get to be there. Just ask my family members.

Is Tom DeLonge still into skateboarding?

I’m still very into skateboarding. And I follow a huge amount of Instagram feeds on skateboarding because I’m still blown away by the difficulty of the sport and the damage it does to your body every single time you fall. [Laughs.] I wish I could do the stuff that I watch. It’s just a wonderful sport. And I always tell people when you get into skateboarding as a kid, the weirder you are, the cooler you are in that culture. That’s just a wonderful culture to be a part of when you want to figure out who you are. And, you know, punk music was the same way. You can have green hair and make stupid jokes and not get a job, and you get points for it.

Don’t worry about tricks. People think that when they get into these sports that you’re supposed to learn tricks and be as good as that. No, the best, most happiest people that surf and skate are the ones that aren’t trying to compete. You’re just out with your buddies at sunset or in the water or at some cool spot on the street, and you’re having fun and rolling around. So don’t get into it that you have to do it a certain way.

And I would tell people that same thing in music. You don’t learn guitar and have to study all the chords and learn music theory. Just make noises and then write some poetry over it, and there’s a song. It’s like whatever noise you like is a song. It doesn’t matter.