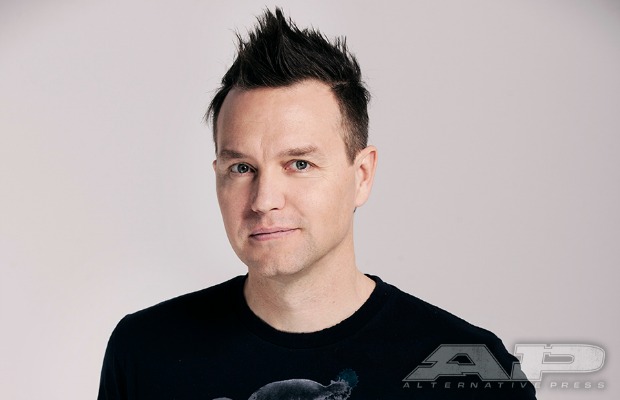 Blink-182 arguably broke the internet yesterday when it was announced that vocalist/bassist Mark Hoppus and drummer Travis Barker would be moving forward without the participation of vocalist/guitarist Tom DeLonge. After the duo made the announcement, DeLonge made posts on social media platforms saying in no way did he “quit” the trio (“I love Blink-182 and I’m not leaving”). After that, an interview with Barker and Hoppus appeared in Rolling Stone, where the duo called DeLonge's claim “disingenuous.”  There was some disappointment from fans, as well as mean-spirited bickering thrown at the media outlets that didn’t know how to rewrite their pieces once DeLonge shared his position with the ‘net at large.

Hoppus recently talked to Jason Pettigrew to clarify some events, establish a timeline on others and pledge allegiance to Blink-182’s fans. What’s refreshing is that at no point in the interview did he attack or otherwise throw shade on DeLonge, the friend he started Blink with over two decades ago.

We should make it clear that Matt Skiba will be playing with you and Travis for the Musink show only on March 22. Everything after that is a question mark.
MARK HOPPUS: After that, we don’t know. We haven’t played a show with Matt yet, so it’s too soon to really say what goes beyond on that. We’re very optimistic and excited about the possibilities of continuing with Matt in some way. He’s a good friend, a great guitarist, a great singer. He has a really positive attitude. I think we’ve been friends for, what, 15 years? We don’t have anything booked beyond that, but we are hopeful and excited.

There was a post of Tom’s on Twitter—since taken down—that said you and he once talked about replacing Travis.
[For the 2013] Australian tour in January, Travis obviously didn’t go on that tour because he didn’t feel comfortable flying, which was a possibility that we had known about from day one. When we agreed to do the tour of Australia Travis said, “I will do everything in my power to get back on an airplane, but if it gets to the day and I’m not ready to go, we need a back-up plan.” As it [came] closer to the time, Travis called me and Tom and said, “I’m not ready yet, I don’t think I’m going to be able to make the flight. We should go with a back-up drummer.” With Travis’ blessing we enlisted Brooks Wackerman and completed the tour.

However, during the course of the tour, Travis and the promoter got into a Twitter argument back and forth that was very contentious and was a lot of stress. Tom was upset, I was upset because it was happening while we were on this tour, and the tour was going very well. Everything should’ve been cool. The promoter thought that Travis had never intended to come to Australia and felt that he had been duped. Of course, that wasn’t the case.

After the tour, Tom was very upset about being put in that situation on tour, where people were threatening to sue, the promoter was angry and everything else. But he was really just blowing off steam. We got back from tour and Tom was having these calls where he was talking about “can we replace Travis, can we do whatever,” but it was really just Tom blowing off steam. There were a few days of calls where I listened to Tom, commiserated with Tom and, immediately afterwards, called up my manager and [said], “Tom’s upset right now, he’s talking about trying to replace Travis, but I’m not into it. That’s not going to happen.” And sure enough, Tom, after a month, called back up and was like, “Hey you know what? I was just angry about it. It was a bad situation, and of course I don’t want to kick Travis out of the band.” I don’t think Tom was ever truly serious about it. Even at the time, I felt he was just angry and he just needed to vent.

You’ve made it clear that you’re doing the Musink date for the fans. I can’t understand why Tom wouldn’t want to support that.
I really don’t understand, either. I couldn’t speak for Tom—l hadn’t spoken with Tom in months. It’s the exact same thing that happened 10 years ago, when he went on indefinite hiatus before where we had a show booked and we had things on the other side. We got an email from his manager saying he was out [and] he was not going to be around to do what he said he was going to do. I don’t know why he wouldn’t just go and play one show and be done at that point.

Travis is also a partner in Musink and it seems weird to me that someone wouldn’t want to support the endeavors of a friend he had been in the trenches with for so long and through so much.
It’s weird to me, it’s weird to Travis. I think honestly, from everything we’ve heard from Tom’s manager and from what Tom has done—and is not doing even more so—Tom doesn’t want to be in Blink. It’s obvious. That’s fine. But it’s so confusing to get emails from people saying, “Tom’s out indefinitely, Tom’s not going to do these things, Tom doesn’t want to record, doesn’t want to tour, doesn’t want to do anything,” and then at the same time say, [adopts shocked tone] “I never quit the band. I just said I wasn’t ever going to do anything again.”

Perfect world situation: How would you want everything to be right now? Would you want Tom to get with the program, play for the fans and be part of a new Blink album? Or are you just completely over it?
The thing is we’ve tried to get Tom to engage [in Blink activity], and everything has been a very, very difficult struggle to get anything done with Blink for the last two years. Everything from getting a label deal done to even playing shows, and trying to get Tom into a studio. We’ve been trying that for the past two years. The ideal situation was two years ago when we said we were going to go into a studio and get working and it never happened. I think those days and that wishful thinking are gone.

If you got a call from him two hours from now and he said, “You’re right, let’s go do this,” would you say, “Cool,” or say “Gotta go, my other line’s ringing?” Has he burned any kind of goodwill bridge?
Just for me personally, it would be very hard to believe that would be the case, because we’ve had those exact conversations many, many times. We’ve all had conversations where everyone agreed that “this is what we’re going to do” and “we’re gonna get in the studio on this date, do this tour” or whatever it is and it doesn’t come to pass like it’s supposed to. I don’t know that I‘d believe it.

Travis and I have been ready to go for years to tour, to record this next album. Tom even did an interview with you guys: Most Anticipated Albums Of 2015 [saying] “Yeah, we’re gonna get in the studio. Yeah, we found a new partner for this [record].” All this stuff and then when it comes time to do the work and get in the studio or get on a tour bus or whatever it is, we get an email from his manager saying he’s out indefinitely. I know it’s confusing for people, but only as much as it’s confusing for us, because for Tom to insist that he loves Blink-182 or whatever it is, I think that his actions speak much louder than what he posts online.

And by the way, that’s cool. Travis and I aren’t angry or mad or whatever. When we got the email from Tom’s manager saying that he didn’t want to record, at least he was being honest at that point. We’ve been dragging for so long to try to get into the studio and try to get to work. For him to finally say, “I’m not going to do it,” was almost like, “Okay, now you’ve actually said it. Now let’s move forward: You do whatever you want to do and we’ll continue doing what we love doing. Which is Blink.

He’s puts out the bluster, then he’s backpedaling. Why?
I have no idea. Honestly, I don’t. I think that Tom doesn’t want to do Blink. I don’t think he has fun doing it. I think he has a good time when he’s onstage, but I think that other than that, he just doesn’t enjoy it. That’s just my guess and my observation from the past, whatever, three years?

Why did you pick Skiba?
We started talking about how we were going to be able to do this show. Travis and I sat down and we couldn’t even think of anybody else. There was nobody else that we even considered asking. He was the perfect fit. And Matt is going to do his own thing: He’s not going to try and walk onstage and be Tom. He’s going to be himself as a member of Blink that day, you know?

Will you be playing new tracks?
There won’t be any new tracks. We haven’t finalized the set list yet. I would like to play a bunch of old stuff, some newer stuff and just have fun. It feels like a license to have fun right now. I love Blink: I want to keep playing in Blink, I want to keep playing Blink songs. I love the legacy. I love where we started. I love where we’re going. I feel very relieved somehow. Everything is out in the open and everyone can do what they want to do. alt