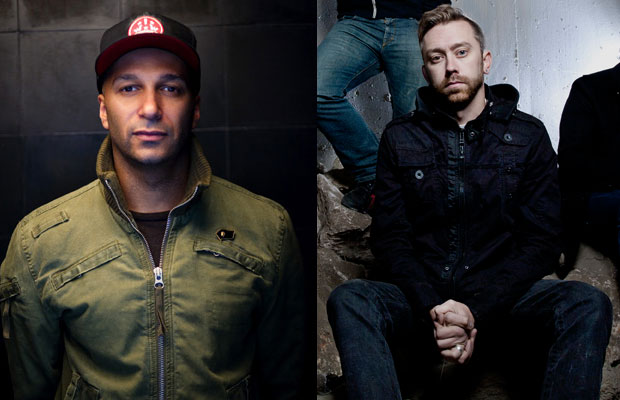 TOM MORELLO will sacrifice big crowds for a big issue. The singer-songwriter’s third Justice Tour is booked for just three small club shows the week of Labor Day. It’s a huge change of scale for the guitarist, who performs fiery solo sets as the Nightwatchman. Earlier this year, he played to crowds of 100,000 Wisconsin pro-union protesters; recently he rocked 70,000 fans at Rage Against The Machine’s 20th anniversary concert. But sometimes massive political movements hinge on smaller gatherings, so he’s unplugging and bringing along some friends for a lean, mean assault on corporate media and big business.

Rise Against frontman Tim McIlrath and Wayne Kramer, frontman of legendary proto-punk activists the MC5, will join Morello. Morello and McIlrath talked to AP about how three generations of firebrands joined forces, why they’re doing it, and what you can expect when you come to the shows.

Tom, how did you hook up with Tim?
MORELLO: We’ve crossed paths a few times over the last few years. Rise Against are good Chicago men; we’ve got a good Midwest bonding. But specifically how we hooked up [for] this tour, Tim and I played together in Madison, Wisconsin, in February, in the midst of the union uprising there when there were 100,000 people in the streets protesting that anti-labor legislation. When it was time to put together the Justice Tour this year, Tim was one of the first people I called.

Tim, are you a Rage fan?
McILRATH: I was probably 16 years old, in the front row of the Aragon Ballroom [in Chicago], watching Rage Against the Machine play. I was definitely a big Rage fan.

Were they an influence on your developing political consciousness?
McILRATH: Yeah. I was already into a lot of politically conscious Chicago bands, but they were very underground. Rage was one of the first examples of those kinds of politics being embraced on a widespread, international way. That was the first me I saw radical politics on the airwaves. That was a clue-in for me, like, “Holy shit, you can sing about these things outside a basement, and people will care.”

In getting to know Tom, how did you go from saying, “Hey, what’s up?” to talking and touring?
McILRATH: I got to know Tom on a personal level and see that he is one of those people who are still passionate and aware. The motivation behind that is definitely his passion for change. I wanted to be there to be part of the protest that was happening in Madison and what people were afraid was going to happen around the country. But I consider myself a student of life and music and activism, so I wanted to be there to see Tom do it. I’m glad to do this tour for the same reasons.

Tom, in your words, what is the tour about?
MORELLO: There are two focuses for the tour. One is that all the money from the tour will go to the Nation Institute. It’s a tour that will promote independent media outlets that are not corporate-controlled. It’s news of the people, by the people. When I was in Wisconsin, the misrepresentation of what was going on [by mainstream media] was pretty staggering.

The reason why we’re going to the specific places we’re going—including returning to Madison on Labor Day—is because of the ongoing, unrelenting attack on working-class people in this country is just so offensive. We’re going there to support the working people in the unions in Ohio, Michigan and Wisconsin.

Do you see the threat level in those states as about the same, or do you think it’s direr than others?
MORELLO: Yeah, [it’s the same]. There’s this aggressive class war going on in the United States, and it’s only being fought by one side. That’s why I was so inspired by what Tim and I saw in Wisconsin. [The crowd was] union cops, anarchist kids, firefighters, teachers and students all on the same side. The feeling in the air felt like it was in Cairo [Egypt], like people just had enough. These are going to be ongoing struggles for people to hold the line and maintain their dignity in the workplace and put food on their table for their families.

The people who own and run this country don’t deserve to, because they’re doing it wholly in the name of profit. They’re going to be floating around in their yachts in the Caribbean, regardless. They don’t care whether your kids have clothes to go to school. The idea that they’re trying to sweep unions away once and for all is their greatest dream. That’s our last line of defense. We, working people, have got to stand together as an alternative source of power, to buck against them.

McILRATH: I think my generation has a lack of understanding about the rights we enjoy as citizens, workers and people, and what battles were fought to win those rights we enjoy every day. I think my generation feel a little entitled to them, and that sense of entitlement overshadows how important and fragile they are. The battle is never over: Somebody is always pulling at the other side of the rope.

What do you see as the benefits that unions have provided?
McILRATH: Many of my peers and people in our audience don’t understand [unions helped establish] the 9-to-5 workday. You could be at work for 12-, 15-hour days. And if you didn’t work those hours, you could be fired, and you’d have no recourse.

[Before unions], if you broke your hand or arm on a job, that wasn’t the business’ problem—they sent you packing, and they had someone waiting out front to replace you. The five-day workweek. Vacations. Weekends. Workman’s compensation. Protection on a work site. All these things we consider basic necessities for our quality of life—they weren’t given to us by bosses and corporations who felt we deserved them. They were fought for, by workers.

What are some of the bogus anti-union arguments you’ve experienced? People say, “Oh, unions have had their day” and “Well, they just care about their own members.” But I always say, “You know what’s totally worse than unions? Not having unions.”
MORELLO: There certainly has been some corruption in unions, and their bite has been watered down. But here’s the thing: The solution is not to get rid of unions. The solution is to join the union and make the union go in the right directions. Because without them, you’re working at McDonald’s, friend. You’re working at Wal-Mart, at the absolute whim of employers who could give a shit about you and your family. Unions have your back. The people who employ you, at the end of the day, the only thing they care about is maximizing profit. If you’ve got no recourse, you’re shit out of luck.

A lot of the current debate is being framed as a partisan issue. But in Ohio, a lot of police officers who are staunch Republican voters feel betrayed by State Bill 5. In a truthful analysis, do you think it transcends party politics?
MORELLO: Absolutely. That’s a great example of how people are trained to vote against their own class interests. Republican policemen vote for someone, maybe because they’re against opposed to gay marriage, and the next thing you know, they’re going to get their economic rights stripped away forever.

One of the ironies of Wisconsin was that the Democrats had no idea what to do with all that power. There were 100,000 people in the streets day after day, more people than in Cairo—and they were about to topple their dictator. The Democratic Party, I think, were terrified of it. They’re not used to that people power. And they directed their energies into these recall elections [against state senators who had sponsored the anti-union legislation], which, frankly, I thought it was a squandering of a historical moment to change the direction of labor in this country.

On the Justice Tour, what will your sets be like?
MORELLO: We wanted to do this in small, intimate venues. Everybody’s going to play a solo acoustic set, and then we’re going to play some songs together. We haven’t worked it out yet. “Three chords and the truth” is going to be the modus operandi. I have a pretty broad catalog. This is my fourth Nightwatchman album that’s coming out, but I’m completely open to Tim and Wayne and whatever they want to do.

Your upcoming album has electric and acoustic material. Will you be playing acoustic?
MORELLO: The idea of the new record is part Johnny Cash, part Che Guevara, part Marshall stacks. On this Justice tour, there’s not going to be a rhythm section. I may bring along an electric guitar. I haven’t worked out the details. It’s great to be sharing the stage with my comrades Tim and Wayne, fighting the good fight.