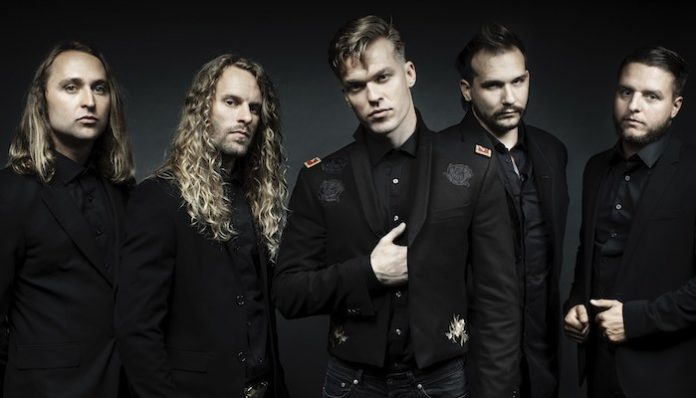 New Jersey metal band Toothgrinder are probably best known for their unique sound: a hybrid of soft, moody melodies and thrash-inciting tracks. However, they also possess an ability to transform. They’ve managed to stay together since their inception in 2010. Even when the collective members attended and transferred to 10 different colleges.

So it’s no surprise that a band such as Toothgrinder can seamlessly adopt a new and exciting tune. For their latest single, “My Favorite Hurt.” Toothgrinder teamed up with AltPress to exclusively premiere the new video.

“My Favorite Hurt,” which comes from their soon-to-be released third album, I AM, is based on change. Justin Payne Matthews opened up about his addictions and how his recovery laid the groundwork for the lyrics to the song.

“‘My Favorite Hurt’ digs deeper into the relationships I have destroyed while in the throws of alcoholism and addiction,” Matthews says. “There is this dark place I have found myself many times throughout my life where I am always reaching for that next high and that next adrenaline rush. I am looking for anything to keep the wall between fantasy and reality hidden.”

Matthews explains he’s viewed himself as an inherently good and moral person, regardless of his problems, and it has affected the ones he’s loved. In his own recovery, he found that his biggest addictions weren’t booze or drugs. It was people.

“The problem is while I selfishly seek out pleasure in all forms, there is an endless amount of destruction I leave in my path,” he says. “People I love more than anything turn to nothing more than a means to an end. It’s a crippling mind fuck that overtime manipulates itself into a psychosis.

“I am addicted to people, affection of all kinds, newness, the ego and most of all the ebb and flow of pleasure and pain. I think I can trace back these thought patterns to age 5 or 6, little things that make so much sense now, but could not be brought to the surface for so long.”

Matthews’ reasoning to reveal his addiction is one based on connecting with his fans who might be going through the same issues.

“I have found solitude in true love and meaningful connection,” he shares. “I never want to intentionally hurt anyone again, and for those I have, I am deeply sorry. ‘My Favorite Hurt’ is the light born from the death of the shadow. I expose myself to help others, because if I continue to live a lie and hide the truth, I can never be my true self.”

Check out “My Favorite Hurt” below.

For those who are suffering from addiction and codependency, Matthews has created an email for his fans to share their stories. “As with our release of I AM, I hope I can bring to light to the issues I have dealt with and maybe someone can relate and reach out,” he says. “My name is Justin, and I AM an alcoholic, addict and codependent.” The email is [email protected].

I AM, produced by Matt Squire (All Time Low, Panic! At The Disco, Underoath), is set to be released Oct. 11 via Spinefarm Records. You can catch them on tour with All That Remains and Lacuna Coil this fall. You can preorder I AM and score tickets for Toothgrinder’s upcoming tour dates here.