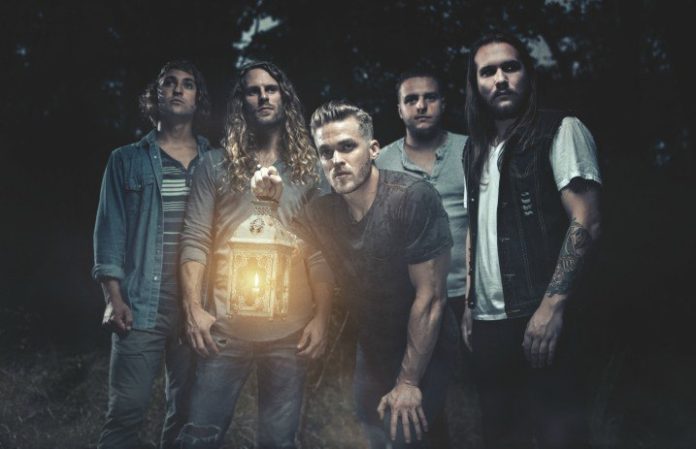 The Asbury Park quintet released their debut record, Nocturnal Masquerade, through Spinefarm Records in 2015. Having recently finished a tour with Between The Buried And Me, the Contortionist and Polyphia, Toothgrinder are gearing up for the release of their second full-length Phantom Amour. The record will drop Nov. 10, and you can pre-order it here.

Watch the lyric video for “HVY” below:

We spoke to vocalist Justin Matthews and drummer Wills Weller to learn more about Toothgrinder—check out the Q&A below:

How did you meet?
MATTHEWS: Most of us knew each other for a really long time, all throughout high school and beyond. We played in different bands, coincidentally usually with each other. Once everyone graduated high school and started to move on with their lives, there was a few of us who still wanted to stick around and play for a bit. Luckily, it turned into something really fun and productive. Later on down the road, we met Johnuel, who has filled the guitar gap spectacularly.

How would you describe your sound?
MATTHEWS: Our sound has been inconsistent since the inception of the group. I mean, we always have dribbled in and out of “metal,” per se, but we never stuck to a particular “sound.” With every demo, EP, full length we record, we always say to ourselves, “I think we found our sound,” but it never really sticks. We have always been ever-changing, and I think that is going to continue for the rest of our career.

Top 5 metal bands of all time and why?
MATTHEWS: In order to keep this interesting and not just rattle off the five “greats,” I am going to keep in mind the time period, style of music and influence.
Pink Floyd because I don't think a lot of people understand how goddamn influential Pink Floyd is to the modern metal scene we see today. If Pink Floyd was in their prime today, I could see them branching into the prog metal genre. I know, not a metal band, but just as much of an influence.
Tool: Tool is an absolute phenomena. They broke the rules in every way, shape and form for the time period and became one of the biggest bands in the world. They took those haunting feelings you get from an old Genesis or King Crimson record and brought it to this aggressive peak that wasn't really seen before. They have always been a huge influence on me as a music lover.
Black Sabbath because Black Sabbath.
Mastodon: Really one of the few metal bands of our era that is really keeping this perfect blend of new, old and in-between flawlessly alive. They are legends at this point.
Faith No More/Bungle: I include both bands because they both made a really slick transition into the '90s and brought down a lot of the cookie-cutter bands of the late '80s. They pulled through uniquely and on their own. They also didn't stick to a particular genre but bridged the gap between funk/metal/rock/prog flawlessly. Another band where I don't think many people today realize how influential those two groups are.

Who's your musical guilty pleasure?
MATTHEWS: Ha! I have way too many. My guiltiest of pleasure’s though has to be a few Kesha hits. (That one burns.)

What does someone need to know before attending one of your shows for the first time?
MATTHEWS: I tend to use the first few rows as my playground, so watch your head.

What’s the craziest thing that’s ever happened at one of your shows?
WELLER: One time we managed to literally rip the lights down, which then snowballed into breaking some other gear on stage followed by the show we were playing to get completely shut down. Now it's a “fun fact” on the Music Choice channel when they play any of our songs.

If you could tour with anyone at all, who would it be?
WELLER: Summer tour with Mastodon and Pink Floyd headlining.

What’s coming up for the band that you’re most excited about?
WELLER: I'm definitely thrilled to be releasing our new album Phantom Amour, out everywhere Nov. 10 on Spinefarm Records.  It's always exciting to get new music out to the world. Also the band has early 2018 tour plans in the works!

Is there anything else you want fans to know about you?
WELLER: We're very happy to be sharing new music with you and were overwhelmed by the positive response we've gotten back. I can't thank you enough, and we look forward to our next adventures around the world!