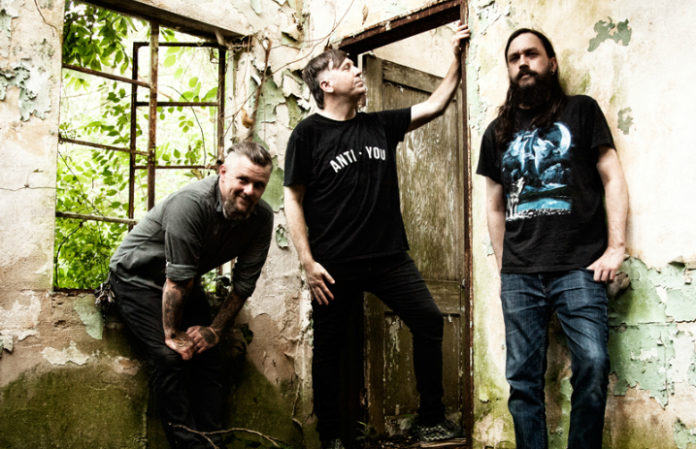 Atlanta’s Whores. last graced us with their noisy brand of rock ‘n’ roll via 2013's EP Clean. After three years, we’ve got a just a tiny bit longer to wait for some new tunes. (Their debut LP GOLD drops October 28 on eOne.) Until then, we’ve got an exclusive first listen of “Metal Illness As A Mating Ritual” to hold you over.

And just for fun, on the eve of their release, frontman Christian Lembach has shared a list of 10 albums from the ’90s that he didn’t write, but wishes he had. Enjoy.

I was a diehard Pixies fanatic when I was a kid, and this record is basically a lost Pixies record. Bonus points for Slint drummer Britt Walford (who the Jesus Lizard’s “Mouth Breather” is also famously about) playing on this record under a pseudonym.

These dudes are the definitive noise-rock band for me. Absolute legends. Two perfect records and a recent return to form after 20 years away.

I got into Fugazi through Minor Threat and Rites Of Spring, and they changed how I thought about music and life. Nothing more to say.

PJ Harvey – Rid Of Me

A feminist deconstruction of this record was the subject of my last paper for my journalism BA. True story. All hail Queen Polly Jean! Loud/quiet/loud for life.

A friend of mine made me a tape with Head on one side and Goat on the other, and it was the ugliest, most damaged and manly music I had ever heard in my short life. I fell in love. Holds up, story checks out, etc.

I heard “We Ate Sand” on college radio in Atlanta a thousand years ago and sat in the car until the song was over. Floored. Legit heirs to the Melvins’ throne.

Is it weird that I think this is a romantic album? IDGAF. It’s a sexy one.

Timeless. I saw them on this tour with Dinosaur Jr and Superchunk. Kevin Shields understands the power of volume. Like a slow-motion car crash.

The revolution will be sexy and wearing pajamas. This band taught me how the personal and political coexist whether you like it or not.

I was a big fan of Big Black and Rapeman as a teenager, but it all came together for me with Shellac. Scraping guitar tones, lock-step bass and drums, snarky, pissed off and hilarious lyrics. Beautiful recording, too.