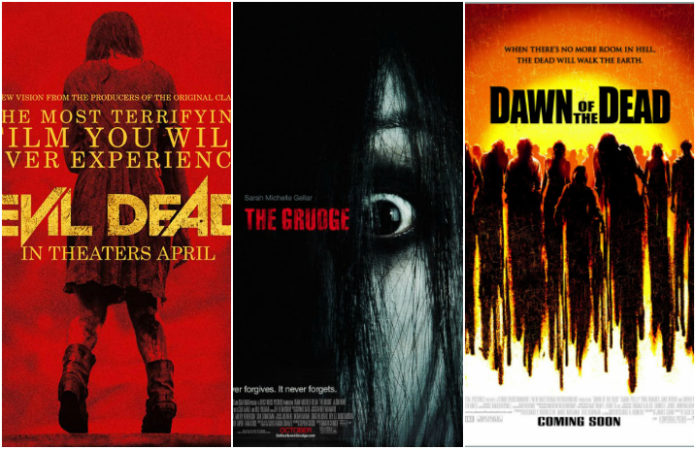 Horror movies are some of the highest grossing films, making millions of dollars each year. Because the genre is so popular, we see constant sequels and prequels in abundance, as well as many remakes of classic works. Horror fans have had had a love/hate relationship with remakes throughout their time; the reimagined work either meets the greatness of its original or falls flat to hell. We compiled a list of 10 remakes that are actually worth your time.

Looking back at the original is all too goofy (the slightly good kind at least). The Ryan Reynolds remake isn’t a masterful film in any sense, but as far as the early 2000s are concerned, The Amityville Horror made for one hell of a jump-scare spectacular, along with some chilling imagery. Let’s not forget the closet scene…

While the remake is problematic for doing the complete opposite of what the original did, no one can deny the hype surrounding the Rob Zombie reimagining. This time around, Zombie attempted to give Michael Myers more of a backstory. While this did take away from the mystery and characters, what we got in return was a gore-filled fest of adrenaline. But let’s face it, that’s what most moviegoers are seeking anyway…

Like the original Japanese film, the American remake of The Ring strongly captured the eeriness behind the history of Samara. While the remake had been stylized American in both production and actors, it held onto the mystery of what makes for a solid psychological horror film. Unlike other remakes, there was no attempt to speed anything up: Things were left to be drawn out and reach their full creepiness as the mystery behind the cursed videotape was explored.

This is another time where the original to remake quality ratio went from zero to 100. That isn’t to say the original The Fly is a bad movie, it’s just hilarious to revisit. The 1986 Fly, however, is one of the most masterful body horrors ever made. As Jeff Goldblum morphs into this hideous creature, we witness some of the most horrid, repulsive mutations to be seen on screen. Honestly, this film is 10 times more disgusting than the first Human Centipede, and we dare you to watch it while you have dinner.

This falls into the same realm as the previously mentioned Halloween, where the original was written and based off such profound commentary, just to be rehashed for an hour and a half of people being ripped apart. However, the Michael Bay-produced Texas Chainsaw Massacre remake is a terrific rush for those just looking for some onscreen action as the characters attempt to flee from Leatherface, the ever-revving chainsaw maniac. It makes for one of Leatherface’s most horrifying appearances, as well; the original character already looked unsettling, but this new version wore faces that were more rotted and grotesque.

One common theme found here so far is that these remakes tossed their political commentary out the window for excessive gore (perhaps that says something about us as humans and our subconscious when it comes to how we view society. Or probably not). In 2004, we found another lone group of survivors holding up in an abandoned mall, surrounded by all the now-useless things they would normally want in life. There’s still a little bit of commentary found in this film in regards to capitalism. You’ll just have to find it in between the parts where zombies are dining on people’s faces.

This is another Japanese remake that, while there was plenty of American stylization, still proved to be an effective and creepy-assed film. The tale of this cursed house and family inside brought moviegoers to the edge of their seats as the lingering sound of the antagonist Kayako’s voice sent a chill up their spines. The non-linear story and mix of slow crawls and jump scares kept audience members off balance as they went deeper and deeper into the mystery of what happened in the house.

Silent House (as far as the original is concerned), is a somewhat underground gem. The original asks a lot of its viewer to trust what’s going on, since there is barely any dialogue. While the remake with Elizabeth Olsen takes away some of the mystery toward the end, it is still a technical treat since the entire film is done in one continuous shot, never deviating into another scene. This technique, combined with a haunting story of one girl alone in a small house looking for her father and uncle, is one of the most nerve-wracking films of the 21st century.

This is the first film on this list that truly kept its integrity in regards to the original (especially if we don’t count the remake of the remake that came out in 2011). The original The Thing and the John Carpenter remake kept their ideas of xenophobia and the Cold War central to the plot, with the latter adding on the extra levels of body horror and tension with an upgrade to special effects. Carpenter’s The Thing is easily one of the most stand-out horror films of our time.

The only place the original and remake differ is in the black humor (which the remake scales back just a little). Beyond that, though, the 2013 version is masterful. It is the most traditional horror adrenaline rush spectacular for its adventure, gore and purposeful cliché horror tributes. And those tributes never take away from the film, but help to keep that sliver of black humor from the original alive. Its special effects were top notch for all the insane gore and blood (everything from the knife-tongue scene to the raining blood finale). It is without a doubt a remake that makes the original proud.