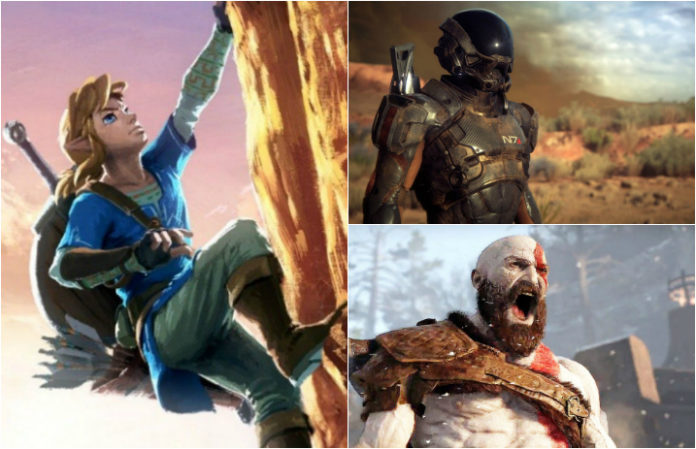 What was once labeled a hobby that some nerd does in their mom’s basement is now an art form that most every human being on the planet takes part in. Whether it’s your friend who is into the latest indie game, yourself checking out the newest triple-A title or your grandma playing Candy Crush, everyone is now playing video games. Based on sneak peaks and early gameplay footage, 2017 aims to be one of the best years for gaming. But with so many games coming, which ones truly stand out? Without further ado, here are 10 video games we are excited for in 2017!

What makes Pyre interesting is that it comes from our friends at Supergiant Games (the folks responsible for such incredible titles as Bastion and Transistor). Not much is known about this RPG fantasy title other than that you are in control of three separate characters, and that it’s supposed to be quite the odd, fourth-wall-breaking twist.

Marvel Vs. Capcom has always been a game for die-hard fighting genre fans and lovers of great fandom mashups. Who doesn’t love having Mega Man and Spider-Man beat the ever living hell out of one another? Not too much is known about this title since it has just been announced, but from the most recent trailer it looks like it will look stunning.

Speaking of Spider-Man, Insomniac’s Spider-Man title looks gorgeous. The hope for this game (coming from such an incredible developer), is that it can hopefully bring us back to the glory days of the Spider-Man 2 video game. Having an open sandbox experience of swinging and crawling around New York was a breathtaking time that really made you feel like the red and blue tight-wearing web-slinger. We don’t know much about villains or story, but we do know from the trailer the action will be nonstop.

Many of you may not know about the Shenmue series, and then there are many of you jumping out of your seats for the third title. Announced at last year’s E3 convention, gamers have been waiting years for this new title that follows Ryo Hazuki hunting down his father’s killer. After a successful Kickstarter campaign, this action-adventure title is surely going to keep gamers busy for hours on end exploring its beautiful world.

Other than the Street Fighter series, Tekken is the king of the fighting genre. Graphically one of the best looking games presented for next year, this brawler will bring back the classic fighters we know and love (along with some extra surprises, speaking of Street Fighter). I could go on and on about why this is going to be a masterful game, but you are better off watching the video with peeps beating the hell out of each other.

Andromeda has a lot to live up to after the ending of Mass Effect 3, but this year’s Video Game Awards showed off some gameplay footage that gives us a lot more hope. Exploring the galaxy on adventures and battles while building your team is surely going to be…out of this world. While we don’t know how in-depth the story will be, this action RPG is going to be one of the best titles of 2017.

This is a series that truly needs to save itself. After the past two games, the name Resident Evil has become a little dirty. Biohazard appears to be returning to the roots of survival horror as you take on new characters in a first-person role. Up against a new terror that isn’t fully known (but pretty damn eerie), you must survive through each challenge in hopes to uncover the mystery that surrounds you. Each new trailer and gameplay footage gives us more and more hope as the creep factor is intensified.

While Ascension wasn’t a mind-blowing experience, God Of War looks to really shake things up. Kratos is now a father and kicking it in the viking world. Where are the Blades Of Chaos? Who is the mother to his son? How did he end up here? How does he keep that beard looking so damn good? These and many more questions will be addressed as Kratos and his son move forward in their journey in 2017.

Perhaps the open world game we’ve all been waiting for. Coming from our great friends at Rockstar Games, this Western Grand Theft Auto is going to bring us back to the frontier of America. Expect lots of horseback riding, shootouts, gambling, drinking and exploration in this new Red Dead adventure.

1. The Legend Of Zelda: Breath Of The Wild

It’s sort of a given that when a Zelda game is announced, it will easily be the most anticipated game of the year. What makes this Zelda extra special is all the new innovations that are taking place in this particular title. Nintendo is shaking things up with a look reminiscent to Wind Waker and incorporating many new RPG mechanics that the series has never done before. All this with a new story taking on an open world experience…will this perhaps be the best Zelda game to ever be?