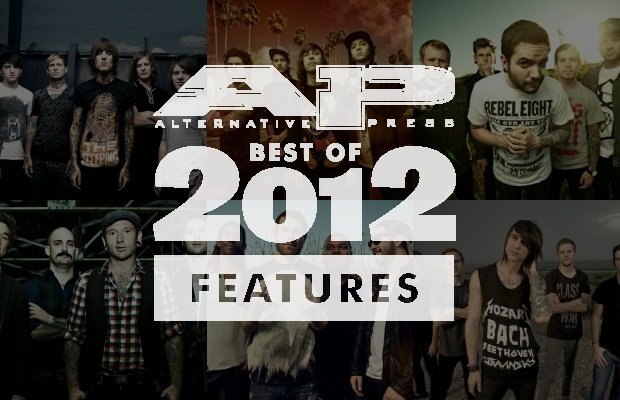 In its purest and original form, Alternative Press is a print magazine, and so naturally, we like to write more long-form and critical pieces, ranging from the funny to the super-serious. In the web world, it can be hard to hold a reader's attention for more than a paragraph, but the following long-form pieces intrigued you enough to read them, share them and come back for more.

All Time Low's Dont Panic made second runner-up for our 2012 Readers Poll album of the year, and the buzz surrounding it was already prevalent when we posted this review prior to its release and rated it a 4-out-of-5.

Judging by the 17 reader reviews we received along with our review, you had a lot to say about I See Stars' latest album. Your many opinions, along with ours, sent this review to the number two spot.

3. What the hell is that? A brief look at ridiculous music genres

Editor in chief Jason Pettigrew says, “I got bored early last month, so I decided I'd shoot smelly fish in a digital barrel by making fun of various oh-so-countercultural music genres. I got some giggles, but as expected, it was mostly pedantic dudes (and it's always dudes) in full-force defending their specific, beloved tech-metal or hip-hop-derived bragadoccio. But since they don't buy the magazine, I laughed them off (except for the one dullard from the rental-car place whose commentary smelled so much like vine-dead sour grapes, I actually changed franchises). The joke was on me, though: Rhianna did end up copping “seapunk” imagery for her SNL appearance that month and not one single straight-hedge band submitted to AP&R.”

2. Have Your People Call My People: 10 awesome collaborations from 2012

Yesterday, you named “King For A Day,” Pierce The Veil's collaborative effort with Sleeping With Sirens frontman Kellin Quinn the AP Readers Poll song of the year (and the its video the best video of the year). When these two powehouses combined, we had to name it collaboration of the year and give our list of runners-up.

1. Hearts Up (and Down): Bands tell us about their best and worst Valentine’s Days

Who doesn't enjoy a good love or anti-love story? In this feature, we wrangled members of some of your favorite bands (Bring Me The Horizon, Go Radio, Pierce The Veil, I Am Avalanche, Set It Off, A Day To Remember and more) to share their best and worst Valentine's Day experience.

3. Parkway Drive’s Winston McCall on keeping it heavy, surfing and their new album

In July, we spoke to Parkway Drive while they were in the studio working on Atlas. In the two years since the band had released Deep Blue, fans had become antsy, to understate it, to hear from the band again and pushed this interview to one of our top spots because of that.

2. “Let’s make it as badass as possible:” Spencer Chamberlain on the life, end and future of Underoath

Editor in chief Jason Pettigrew says, “My chat with Underoath's frontman was one of those rare moments of brutal honesty to be heeded by both musicians and fans alike. After announcing their intent to disband after a short series of dates in January 2013, Chamberlain (as well as guitarist Tim McTague later that week) outlined in no uncertain terms why the band had to end. Underoath's decision to not become a Warped Nation “legacy act” at the expense of creativity should be a real-talk lesson to both bands and fans regarding the travails bands have to go through in the new music industry. Will I miss them? Absolutely. Do I feel they did the right thing? Without a doubt. Underoath kept their band together longer than most marriages. Walk in their shoes and see how long until your ankles explode.”

1. Escape The Fate on their new lineup

Written in long-form feature style rather than the standard Q&A format, this piece captured your attention and sparked curiousity, doubts and excitement about Escape The Fate's future with new members and without those that some of you felt were an integral part of the band.