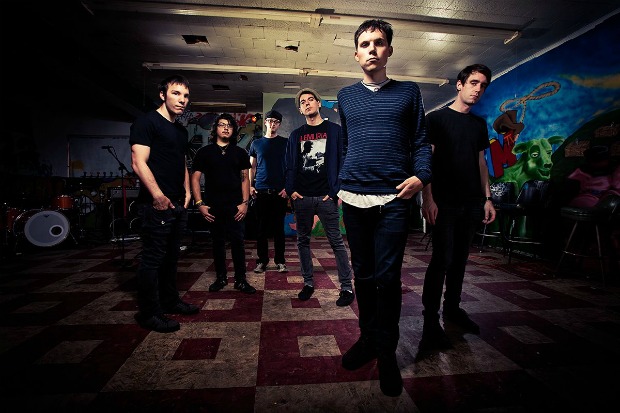 Pittsburgh, Pennsylvania-based White Wives (featuring members of Anti-Flag, Dandelion Snow and American Armada) are currently on their first extensive American tour in support of their debut full-length Happeners, and they'll be periodically sending us diaries from the road throughout the run. Here's the third chapter.

Did everyone get their 8 hours last night? Because we spent ours driving from Boise to Seattle. Commence zombie mode. Chris Head & Stowe teamed up to make the overnight drive to The Emerald City. Arriving in the early hours of the morning, we debated on how to spend the rest of the day. Unsuccessful in our attempts at finding a place to stay for the day, we settled on trying to find a cozy parking lot to catch up on sleep in. Punk rock at its finest.

12/06. Fast forward a few hours – some of us were rested enough to catch up on work using nearby coffee shop’s wi-fi networks. Once caught up, we decided to find some entertainment to keep us occupied until show time. Chris Head discussed catching a movie which led to the crew hauling off to a mall downtown. After a little more discussion, we decided to browse inside of the mall instead of the theater. Chris Head took to indulging in mall massage chairs and milkshakes while Roger spent some time buying new kicks as the band sat to a quick lunch at Red Robin. The rest of our down time was spent listening to new incoming Anti-Flag mixes in the van. Before too long, it was time to load in at the High Dive, our venue for the evening. Greeted by a friendly staff, we prepped for the night hooking up with our friend Christopher of MANSIONS. The night kicked off with local talent, Ryan Hyde, playing a great acoustic set with a surprise appearance by our own trumpetier, Josh, as the two jammed a cover of The Bouncing Souls’ “The Pizza Song.” Soon after, MANSIONS and KOJI tore up the stage (as Josh went off to the Center of The Universe to be eaten by a troll). The rest of the night saw us jamming with the Seattle natives that came in from out of the light rain that had started to fall outside. A quick midnight dinner at Beth’s Diner, of Man vs. Food fame, and we were off to Portland, OR.

12/07. Arriving around 4 a.m. in Portland, we were set up at our friend, Robert’s. The next morning, Tyler, Stowe and Josh indulged in the Super Nintendo set up in the living room. Shortly after, scooping up Roger & KOJI at a nearby coffee shop, we made our way to Portland’s famous Voodoo Donuts where we marveled at the vast array of tasty colorful pastries revolving the counters. It was very close to lunch time as well and soon we were off to be treated to another “Nice. Real. Meal” at another Native Foods downtown. Soon after, we would be blindsided by an email that stated that a group of kids had gathered at a house to be treated to an acoustic house show. It was 4:25 and the show was scheduled for 4:30 so we quickly rallied the troops back to the van to make it on time. Later that night, we would be playing a 21+ show over at The Rotture, so it was nice to see a great turnout at the house show since most of its attendees would be unable to go due to the age restrictions. The Rotture was placed in a quiet part of Portland, and after a quick set up/sound check, Chris 2, Tyler, Head and Josh walked over to the Crystal Ballroom to catch up with recent tour buds, AWOLNATION. AWOL was rocking a sold out crowd downtown and provided us with All Access passes for stage access. We’ll be hitting a few spots across the country with AWOLNATION in late January 2012. Check WeAreWhiteWives.com for dates!

After watching AWOL’s set for a few minutes we made our way back to The Rotture where we were treated to some free meals before our own set.  Again with the show being a 21+ event, we saw the smallest crowd of the tour yet. But in the undying words of our own Tyler Kweder “We just gotta keep bringing it hard every night!” If there’s one piece of advice anyone takes from this business, it’s that whether you’re playing to 5 people or 500, you always give it 110% up there. One more 10-hour overnight drive to Reno, NV and we would finally be arriving in California and completing our own Manifest Destiny.

12/08. As the rest of us took to the homes of van benches once again, Chris Head spent the night avoiding wolves running across the highway. Seriously, this guy. Horse whisperer. Wolf dancer. What CAN’T Chris Head do? At sunrise, a driver switch was in order as Chris 2 took the wheel deciding not to fill the gas tank before continuing. Little did we know that there would be no gas stations for miles.  So off we drove towards Nevada, having to give up our oranges to the Department of Agriculture along the way. It was there where we would find out that the nearest gas station was about 42 miles away. Our gas gauge read “48 miles until empty”…

Needless to say, after switching between Neutral and Drive gears along the way in an attempt to save what little was left in the tank, we managed to make it to the next town with 1 mile left on the gauge. The tour gods were on our side that morning and we made it all the way to Reno with no more issues. We were welcomed by the tenants of Fort Ryland 2000 who had prepped a most fantastic DIY garage/basement set-up. We packed into the tiny basement area and soon after, Chris 2, Tyler, Head and Josh went to a nearby casino to catch the rest of the Steelers game. After watching them steamroll over Cleveland, the gang reunited at Fort Ryland and the show began. After a quick passionate spoken-word presentation, KOJI took over the garage with another great sing-along performance. To all the attendees in Seattle, Portland & Reno, thank you for making our first visits a great time! Hold onto what you all have together in your local scenes. That goes for everyone we’ve met in the past two weeks on the road! We have been tremendously honored to be welcomed into so many local DIY scenes…Thank you and remember when the show is over and you pass each other on the street the next day, say hello, take the community of the shows outside of the confines of the show’s four walls. See you soon!