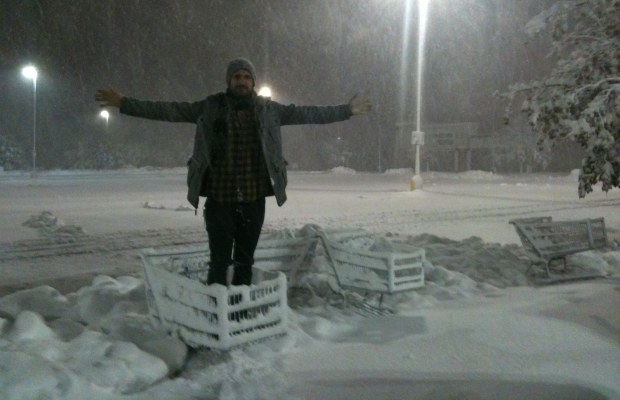 [Go Radio and Every Avenue will be keeping a tour diary for AP while they're touring America with Yellowcard. Here’s installment number three, as penned by Go Radio’s Matt Poulos.]

Weeks three and four of this tour have officially come and gone. We started out the second third of this six week run in Minneapolis, Minnesota, at the Varsity Theater. That show was sick. The crowd showed up ready for a rock ’n’ roll show and didn't back down. We realized that night that this is one of the first tours we've done in awhile where our fans have been able to buy us all drinks. It's hard to say no to someone who says, “I love your band! Can I buy you a shot?” Tequila was a good friend to some of us that night, and a bitter enemy to others. Needless to say, Minneapolis was great.

Their neighbors to the east generally didn't share the enthusiasm. I'm not sure what was going on, but it felt like the people in Madison, Wisconsin, weren't exactly sure what to expect at a rock show. It felt more like we were playing a dance marathon or pep rally. We did meet some awesome new people—and I even ran into a guy I toured with six years ago—but all in all, Minnesota was winning the Midwest’s awesome contest thus far.

The next night we were back at one of our favorite venues in all of the U.S.: The Rave in Milwaukee, Wisconsin. This night was one of those nights that only a venue like the Rave can deliver. As it turns out, on the night we were playing, there were two other shows going on in the different levels of the venue. At the top in the massive Eagles Ballroom was active-rock powerhouse Evanescence. The production value on this show was unbelievable. Opening for them was grown-up Cindy Lou Who and her band, the Pretty Reckless.

In between our two shows, on the second floor was an experience that I'd pay money to forget. Pauly D. was “spinning” a “DJ set.” Yep, one of those guys from that show Jersey Shore now tours and plays dance music for people. Man, I thought it was going to be hilarious… but no amount of dark humor appreciation in me could bear to conjure up the courage to find any of it funny. The dude literally played club songs, wore some shiny headphones and every once in a while looked at his computer to see what song was coming on next. I take that back—that's not all he did. He did point at himself a lot and flex every time the sample “DJ PAULY D!!!” played through the mix. (***insert fog horn triplets***) Our show that night was incredible. Milwaukee always treats us well, and that night was no exception.

Chicago’s House Of Blues is always epic. Man, we love that town, and there's nowhere better to play than the House Of Blues. I could talk about it more, but I'll just say that to date it's probably been the best show on this tour. Every Avenue's hometown, Detroit, was next on the list. Great show; great town. Tons of homeless people (outside of the show, not in it). Alex [Reed] got strep throat, no big deal. After a day off and a bunch of antibiotics, he was right back on schedule. #whatatrooper

The next night was an emotional one. Ryan Key's beloved aunt, whom he sings about frequently, lost a long fight with brain cancer that night. Towards the end of the set he played “Sing For Me” by himself and that night it was pretty damn powerful. Thoughts and prayers to his whole family.

After a great show in Buffalo, we headed to our very cold neighbor to the north for a show in Toronto. What is it with Canada? They always give us such a hard time about entering their country. We were coming in for less than 12 hours to play one rock ’n’ roll show, and they give us the tenth degree like we're asking for a loan or trying to make Canada our permanent residence. Just let us do our job please, Canada Border Control. Luckily, Canada shows are usually out of control. Toronto was awesome. Thanks, Canada fans, for making up for the terrible border experience your country always gifts us with!

Connecticut was something special. Probably the worst snowstorm I've seen in several years. A tree snapped and almost killed our tour manager, Greg. It was impossibly cold and unfortunately wet. Due to the weather, it was probably the smallest show of the tour, but as I called them from stage, all of the people there were the “true believers in rock ’n’ roll.” A blizzard couldn't keep these humble few away. Well done, true believers.

Boston was the night before Halloween, so Go Radio went full tilt. We dressed up as the cast of Gentlemen Broncos. If you haven't seen the movie, I highly suggest it. It is one of our favorite movies as a band and we really did them justice, we think. Jason [Lancaster] was Bronco, I was Brutus, Alex was Chevalier and Steve [Kopacz] was a cyclops. Please, for the sake of your soul, go watch that movie and then YouTube our Halloween show. We. Had. Fun.