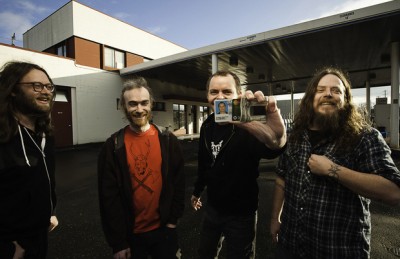 Red Fang just wrapped up a monthlong North American tour with Mastodon and Dillinger Escape Plan. Here's their final update from the road.

Where the hell was I? Oh yeah…

Okay, so we stopped at Niagara Falls, and it was great and beautiful and all that shit.

But the best part was the signs that they have all around the park. While we only spotted maybe three that actually told you anything you wanted to know about the waterfall (that fact that 650,000 gallons a second fall over that bad boy was pretty badass) there was a few others that really got us thinking. Here’s a couple favorites.

And it turns out, if the sidewalks get wet up there, it makes you dance like an extra in the “Thriller” video.

On the way to the show we got stuck in a traffic jam that lasted close to three years. When we finally got moving (at this point we were already an hour late to load-in and close to two hours from the club) the lady behind us was nice enough to rear-end us. At the time, I was kinda pissed at the lady, but looking back I feel bad for her. This is how she saw it:

She gets out of her car and sees three long haired, bearded dudes running towards her, none of them say a word to her, open the rear of the van look at what seems to be a bunch of large wood boxes, look at each other, say “Fuck it, let’s roll” get back in the van. The van drives off. She is still standing in front of her car with the bumper pushed in. No one has said a word to her.

One of the best parts of the road is getting to hang with old friends, and it’s especially awesome when you have friends that are willing to drive a couple hours to do it.

You know it’s love when you can get all up in the beard:

Thanks for driving down homies! It was great seeing all of you. (Continued on Page 2…)