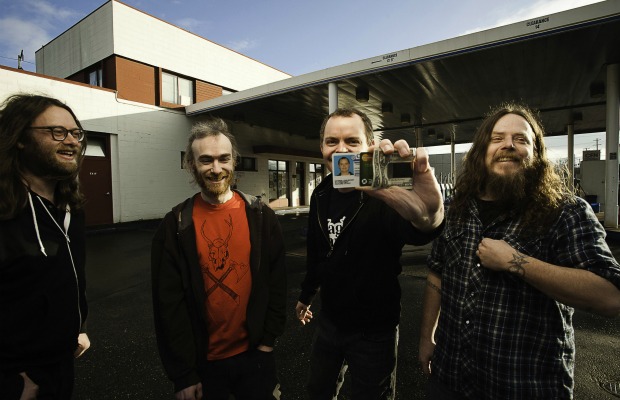 [Red Fang is currently out on an American tour with Mastodon and Dillinger Escape Plan. Their longtime roadie, Chris Coyle, will be bringing us diaries from the road for the next several weeks. Check out the dates here.]

Well, John lost his camera again, big surprise. So most of the photos in this edition of the blog are what I could piece together from our phones.

One thing I have never understood is the lack of women at Red Fang shows. Think about it: there is never a line for the women’s room, you know that there is always going to be a surplus of t-shirts in your size and there is a ton of single men. Sure the majority of them look like this:

But hey, at least you know they have a lock on all the good spots to eat in town. For that matter, you’d think there would be more Bears at the shows, hmm…

You know, now that I’m thinking about it maybe we should turn all the shows into singles mixers. It could be a speed-dating type thing, but instead of sitting down at a table and talking for two minutes you have to do the old yell in each other’s ears trick and switch at the end of every song. Then if you like the person you say “Hold my jacket, I’m going in the pit!” and if they like you back they’ll do it.

Because everyone knows that’s the sign of true love.

Most people at our shows see the boys on stage playing their gem encrusted instruments and ruby laden clothes and think “Wow! Those guys must each have their own solid gold tour bus!” But actually we are still in a van, without a trailer. Trying to cram all the gear plus merch and five dudes makes for some tight squeezin’, so we have become pros at packing light. That being said, I thought I could share Red Fang’s guide to packing for a tour with you:

T-shirts = Number of weeks on tour plus one (Just in case)
One hoodie
Two pairs of pants (The second pair is just in case you rip the crotch out of the first pair, a lesson learned the hard way)
Warm jacket
Swim trunks (These are multi-purpose PJ’s/swimming/and underwear in a pinch)
Toothbrush (this is just for show)
Computer (for writing blogs that no one will read)
Camera (see above)
Gold Bond powder (shower in a bottle)
The rest of your bag should be stuffed with as many pairs of socks as you can fit.

We played at The Depot in Salt Lake, for those of you that don’t know, The Depot was once a old train station. This makes for an awesome building but getting to the “backstage” area like a scene out of Spinal Tap—mostly because it was nowhere near the stage and took a secret elevator code ala Get Smart to make it down there. Once you were downstairs you had to follow a series of arrows and instructions through a subterranean labyrinth ‘til you found the room with your name on it:

Oh Denver, we love you so much. From your awesome bartenders who are not afraid to zest up your drinks with flaming umbrellas:

To Aaron’s folks who, even though they were out of town, still took the time to make sure we knew how to toast the bagels they had left for us:

Can you do me a favor, Denver? Don’t go changing.

Tune in next week to see if David can finish this entire candy bar without going into a diabetic coma: