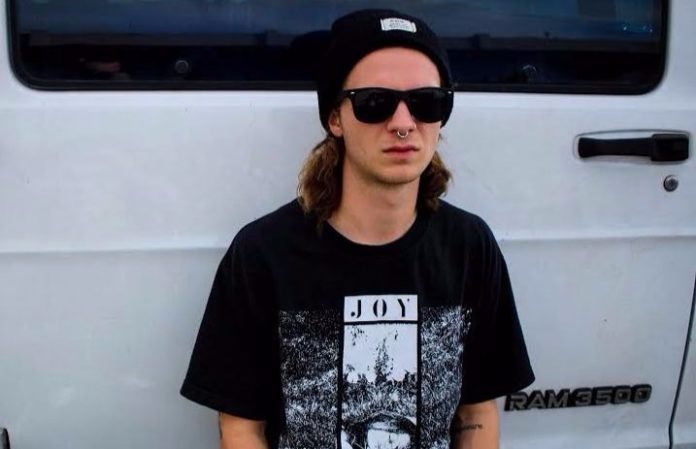 I remember the first time I experienced tour depression. A pillow, a blanket and a pair of noise-cancelling ear buds were my invisibility cloak. I sat in the rear-window seat of a 16-passenger church van. I didn’t care what music I was listening to. I just wanted to sleep, and I sure slept a lot. I didn’t want to hear laughing, conversations, cars passing us or music coming through our crappy van speakers. I just wanted to hear guitars. Constantly lulling myself into a trance, I was never really asleep or awake. I was going completely numb. I remember calling my girlfriend and breaking up with her when we were in Oregon. I was just trying to feel something, but I hung up as she began to cry. Spiraling downward, we still had two weeks left on our first tour.

Read more: Members of the music industry open up about their mental health: “We’ve got each other”

My name is Russ, and I am the vocalist in a melodic hardcore band called Withered Bones. We have toured for a few years now and have covered more than 40 states, plus a few stops in Canada. By no means have we “made it” yet, but we have reached a comfortable flow since partnering with Blood & Ink Records and hitting the road with solid bands. I am writing this because I believe no matter how big or successful a band is, anyone who tours has likely experienced the impact it can have on one’s mental health.

When people think of touring, it usually evokes thoughts of partying, money and women. But touring in a small, DIY circuit, at least for us, has been quite the opposite. We have often put gas in the van with credit cards, praying that we would break even soon; driving thousands of miles around the country selling T-shirts to play 20-minute sets in bars, basements, garages and abandoned storefronts. This lifestyle is truly a labor of love. We all dropped out of college for this. We drink too much, don’t sleep enough and often skip meals. We don’t stay in hotels because that would deplete us of any profits we make. Now that Withered Bones have been touring for a few years, our connections have blessed us with places to stay. Beds, couches and floors to sleep on and sometimes warm, home-cooked meals.

These nights keep us alive in so many ways. But there are always nights where we have to park at a rest stop and wait for the sun to come up. This is often when morale starts to decline. I remember one night in in particular: We played an awesome show. (Show attendance can really vary for us, so when we play to a packed room and have a positive crowd response, it feels like winning the lottery.) We sold lots of CDs, and it was smiles all around. It’s easy to feel fired up after playing, since a lot of the day is just laying around in anticipation of the show. We live for that 20 minutes. When the bands were all done playing and people started leaving, we realized nobody was going to take us in for the night. We had an eight-hour drive to the next town, so we just piled in and drove as far as we could. By 3 a.m., everyone was either asleep or trying to keep the driver awake. We pulled into a rest stop and called it home for the next few hours. Some of us have to sleep outside of the van for the sake of room, so we bring tarps and sleeping bags. By morning, families with dogs and children had started pointing or taking harsh second glances at us wondering why the hell a man in a sleeping bag is laying under a van. There have even been instances when cops have come and told us to move along.

Frustrated and exhausted, somebody reluctantly got in the driver seat and started routing us toward the next town. We got to the venue early; when you don’t have money or friends nearby, a lot of time is spent waiting. I have found that boredom is poison among sleep-deprived bandmates. You have all of this time for introspection, up against all of these suppressed thoughts that might be easier to ignore in the midst of a busy home life.

When the show finally started, there were only 10 people in the room, five of which were members of the opening band. I know we aren’t a “big” band, but playing a set to an empty room was pretty damn defeating after what we’d been through the previous night. I could see it on everyone’s faces: “Why are we doing this? Is this worth it? This is bullshit. I can’t keep doing this.”

The rollercoaster of good days and bad days often feels like too much to comprehend. The bags under our eyes grow darker, and conversations become shorter. A lot of our time is spent sitting on the ground against walls so we can stare at our phones while they charge. Silence in a room full of your best friends brings an almost tangible emptiness. I have started going through a mental checklist on the days that feel off. “Have I eaten today? How much sleep have I gotten? When was the last time I called home? Am I hungover?” It’s basic survival, but there’s no reason to stay sad if you can help it, because God knows someone else in the band probably needs encouraging. Moods are contagious, and we have to pick each other up. Especially due to the fact that something like the story I just told happens every tour, not just on the first one.

When I started touring, I was working a job I absolutely hated. I think we all were, but it’s hard to find jobs that let you take several weeks off at a time, so we push through. We often face the question: “What do I do when I don’t want either?” I don’t like my job at home, and I don’t like being in a broke touring band. This is a double-edged sword so many musicians face: sacrificing finances, time and relationships just to chase a dream. Obviously, we knew what we were getting into when we chose hardcore. Paying some costs out of pocket is inevitable, so we all end up crawling back to our jobs.

Read more: Post-tour blues: On going home, anxiety and taking care of yourself

Coming home can be just as hard as being gone. When things are tough on the road, it’s easy to forget how monotonous normal life can be. Eating real food and reuniting with loved ones and pets is an incredible feeling, but we are never eager to return to work. Coming home always leaves me feeling displaced, but telling the whole truth would be admitting defeat: “It was amazing. So much fun.” These aren’t lies; I just don't want to admit that I’m not mentally present. Jumping back into a routine like nothing has changed, floating between the two lives I live. It feels like being stuck in a black-and-white movie. “I should be happy now; tour is over.” But often I feel nothing. Post-tour depression can be easier to deal with since I have the direct support of family and friends. I just have to be cognizant of my emotions and admit when I am struggling. Sometimes I don't realize it immediately, and other times I try to ignore it. I’m always desiring what I don't have.

It doesn’t always make sense why we do what we do. From the lack of sleep and proper nutrition, to the late nights and eventless days we endure. The fighting, the long drives and the friends we lose contact with: It’s a lot. But I remember the first time I heard hardcore. “These guys are pissed,” I thought to myself. For the first time, I identified with a culture of people who were 100 percent honest about how they felt. It encouraged me on my journey of self-discovery. The music might be loud and sometimes abrasive, but it was keeping my friends from killing themselves. I started going to shows at age 15, and I knew from that moment I wanted to carry on that legacy. Kids are getting the snot kicked out of them and leaving with smiles. These bands serve as counselors, and all they have to do is be truthful to themselves. I owe so much to hardcore, and I want to continue inspiring younger generations. The people who saved my life likely experienced the hell that tour can be, and I have no excuse not to carry that torch.

We have found a home on the road. As hard as it is, there are always friends we look forward to seeing and venues we love to play. We love going to skate parks and playing hacky sack in parking lots. Heating up food in gas station microwaves and drinking room-temperature beers out of the van. This sense of camaraderie is not the kind you’d find any other way. Seeing new places and revisiting others is incredibly humbling, and I am lucky to have had the opportunity to continually do both. I have learned to be comfortable with being uncomfortable, which is a trait I can carry with me forever. At the end of all of this, I will never forget the people who helped me through the psychological warfare that touring can cause.

Russell Ullrich is the vocalist of melodic hardcore band Withered Bones. The band has a new album, In Search Of Self-Evidence, coming out via Blood & Ink Records on Dec. 8. Pre-orders are on sale now.