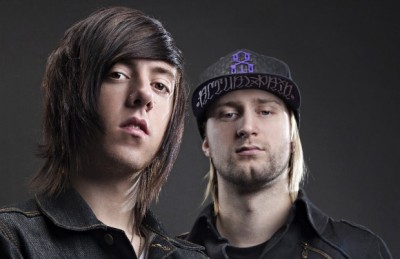 BREATHE CAROLINA's Kyle Even takes AP track by track through their new album, Hell Is What You Make It, which is out now.

“Rebirth: An Introduction”
This is the intro track for Hell Is What You Make It. This track comes full circle at the end of the album, as it has the same refrain from “Lauren’s Song.”

“Wooly”
This song features our best friend and [tour manager], Coco Wiley! It's about attempting to try and save someone, but understanding that only they can save themselves.

“Blackout”
“Blackout” is the first single from the album. It's about the end of the party, seen through our eyes. “Blackout” definitely reflects some of the wild nights we've had as band. This was also one of the first songs we recorded with our producer Ian Kirkpatrick. We hope you can keep up!

“Edge of Heaven”
This actually was the last song completed for the album! Every deadly sin is talked about. Can you find them?!

“Last Night (Vegas)”
This track is based on the nights we’ve had in Vegas—suite life and chandelier swinging! We see this song being the continuation of “Blackout,” but more like the morning after the night before—and the hangover.

“Sweat it Out”
This is a BC-style club track, a first-person perspective through a night at the club, rave or show. If you’re not sweating, you’re not having fun! It's about getting lost in the night, and when the lights come back on, you’re in a whole different place than when you started.

“Gone So Long”
After being on tour for three years and being able to see the world, we realized how much home means to us. Being away for so long, you start to wonder if everyone has moved on to new lives and new things. I guess it’s inevitable that in some ways, they do. This is a message to our families and friends in the hope that they haven't forgotten about us, because we sure haven't forgotten about them.

“They Say You Won’t Come Back”
Hiding a part of yourself is like killing that part of you. But like all murder mysteries, someone's going to go looking for the evidence, even if you warn them to stay away. What will you do to keep them from finding the truth?

“Get Off Easy”
Some things are just in pretty packages. This one, however, is a Pandora’s box…

“Waiting”
The pick-up line, and everything that comes after.  It’s about waiting for a sign, but thinking about what would happen if the person you wanted really wanted you too. Moral of the story is: Make a move—maybe you'll be surprised at what comes next!

“Take It Back”
This song is about realizing that you have lost yourself in trying to make other people happy. It's about getting back in touch with yourself and finding happiness in being on your own.

“Chemicals”
Think “Requiem” meets “Go” and you get “Chemicals.” This is the only song on the record we recorded with Matt Squire. We worked with Matt on our previous record, Hello Fascination (on the songs “Welcome To Savannah,” “Dressed Up To Undress,” “My Obsession”) and were very excited to work with him again!

“Lauren’s Song”
This song is a tribute to an amazing girl whose life was cut short, Lauren Freeman. She was more than a friend; she was a sister to us, and this record wouldn't be what it is without her. This song is meant to celebrate her life. We know what it means to lose someone close; hopefully, we can give you something to relate to if you've had someone close to you taken by this thing we call life.


Thank you for getting to know these songs, but really, they are yours to create stories for and give life to. Enjoy!