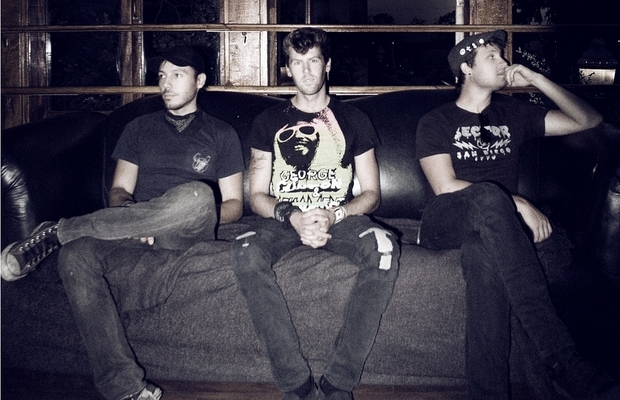 COBRA SKULLS vocalist/bassist DEVIN PERALTA tells the stories behind each song on the band’s new EP, Bringing The War Home, which drops today on Fat Wreck Chords.

Doomsday Parade
This song is basically about how human beings are destroying the planet and how whistle blowers, environmentalists and proponents of “green technology” (like myself) won't really change anything in the long run. Unless strict laws are put into place that force every human on the planet to change how our consumer-driven society is destroying our planet, people like me will be nothing more than a “trumpet in a doomsday parade.”  Depressing sentiment much?  Yeah, I know.

ICE In The Night
This song is a true story about my friend and co-worker who was abducted from his home near Fresno, California, by an American terrorist organization called U.S. Immigration and Customs Enforcement (ICE).  My friend, who is one of the most beloved employees on my uncle's farm is a legal resident alien from Mexico. He had a green card, but he was shackled and sent on multiple flights to a border camp in Texas where he was to be deported, but luckily my family's lawyers were able to help get him back home before  that. This is not the first time ICE has messed up—I know from reporting for a Reno newspaper. But this hit home and made me wonder how they can mess up so badly, how often and at what cost?

Hot Sand
War? What war? For the past few years, we have still been fighting wars, but it hasn't seemed like it to me. Are people planting victory gardens and collecting scrap metal for the cause? No, we're busy competing in the market place and shopping. According to the media, the war is old news. Only families who are directly touched by the casualties of this war really feel it, but it's still going on, and we’re not likely to see the end of it during my lifetime. Obama can bring home all the “combat” troops he wants, but American troops will be there for a century. American wars are economic investments from which our military industrial complex is not going to walk away. Oh, yeah, the title of the EP comes from this song.

Give You Nothing
The geezers in Bad Religion can explain this song since they wrote it, but we chose to cover it for their 30-year tribute because it's simple and fun. It's off of the album [1988’s] Suffer, which many people will say is the album that reinvigorated punk music—at least on the West Coast. Though Suffer sounds great sonically, Bad Religion weren't too instrumentally technical yet, which was important to me, because we are far from virtuosos and trying to cover anything post-Suffercould have been laughable.

Life In Vain
This is the mushy song of the EP. Being a songwriter, you want to write from experience, but sometimes you don't want to honor that experience because you find it cliché. For example, this song is about romantic relationships and being in a band. During the past century of music, I think that those subjects have been covered pretty well. But then I realized that to deny myself writing about my own personal experience would be like living my life in vain, so I figured it's better to just go with it. alt