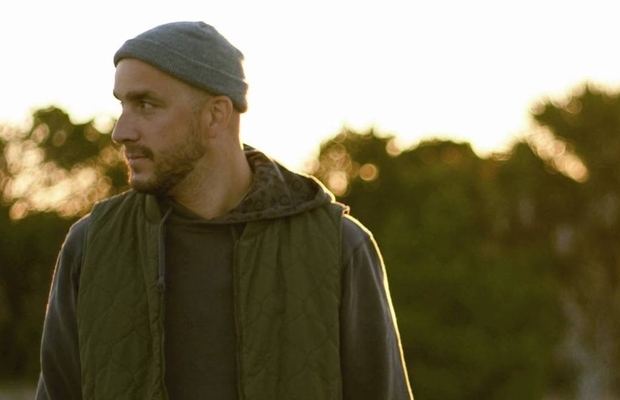 DAN ANDRIANO takes AP track by track through Hurricane Season, the album he's releasing under the moniker Dan Andriano In The Emergency Room. The album is out August 9 via Asian Man Records.

Hurricane Season was a title I thought of shortly after I moved out of the big city, über-convenient lifestyle I had in place in Chicago, and headed south for a slowed-down, family- and health-based lifestyle in St. Augustine, Florida. For a short while, I was unsure about the move. I never doubted it was the best thing for my family, but as a man who had become a bit self-absorbed and routine-based, deep-down, I was conflicted. It showed in my words and actions: One day, I'm beach livin'—”Why the hell would anyone live anywhere else?”—and the next day [I’d be like], “Wow, it's pissing rain, but somehow, it's still a hundred degrees, and I don't know who to call to go watch the crazy-good country band playing downtown.” Let's just say I got a little moody, or depressed. It was like at any given time there was serious storm inside me just waiting to bum out everyone I love and care about.
So as I tend to do in these situations, I started writing songs. Writing helps me cope, it's cathartic, and it’s the best way for me to stop taking shit for granted. And once it's out there… I'm not sure it's doing anybody else any favors, but at least it's not just swelling in my mind and burning my heart.

“It's Gonna Rain All Day”
It began as I woke up at home to a very Florida-style downpour—thick, muggy and [producing] the sweet smell of wet greenery. [It] kinda makes you think it's like a big, family-style sit-down for the old pines and the thick-bladed Southern grass. I had this melody in my head for a couple days, and at that moment the lyrics for the chorus wrote themselves; I had a good metaphor for being “covered up in grey.” And I was content with that for a while.
Not long after, I was doing a bit of touring, not even sure where, but I woke up in a hotel bed at some shit-hole. [It was] pissing rain outside, and I didn't really want to move. Almost instantly, I started finishing the lyrics to this song. It became about decisions we make as people, and where those decisions take us. Sometimes we have the power to make it rain on ourselves, and flood our lives with negativity. Sometimes it's just beautiful to smell the wet grass and go outside and get wet—get clean.

“Hurricane Season”
As I touched on in my preamble, I get a little moody sometimes. In this song, I write, “I'm like a wine glass sitting on a wedding dress, I am ready and willing to make a mess. And it's hurricane season, as if I ever need a reason. So how do you live with that?” Basically, I have a hard time trying to divide my time between my never-thought-it-was-possible-it's-so-beautiful love for my wife and daughter, and my love for writing songs/listening to music/touring with my friends who try and share what we've put so much into. So this is basically an apology and a thank you to my ever-loving wife, a superhero of a mother and an incredibly foxy lady. Because as I'm trying to get better at prioritizing, and scheduling and all that shit that doesn't come naturally to me, she's still here. Not just hanging around, but supporting me emotionally and trying to help me become the best person I can be.

“Hollow Sounds”
This song sounds like a simple “I miss you” song, with a hint of, “I know I'm gone a lot, but please don't leave me.” [It] sounds a little like well-worn territory for some, I suppose. But I've never felt like this in my life, and I'm 34 years old and have been married for 9 years. It all comes back to me being kind of a wretch who's taken a lot for granted—and now, as push comes to shove and we are introduced with a hearty handshake to real-life problems, I need someone. Fortunately for me, I know exactly who she is—and I married her as soon as I could. But I don't always do that great of a job asking for help. This song is a request for a favor, and a pledge that I'll return it.

“Let Me In”
Anyone who knows me, or knows of me, would understand how much time I spend away from home. It's an incredibly blessed life I lead, yes, but homesickness is one of the worst illnesses going these days, and I get it pretty bad.

A quick side note: There was a road trip I took with one of my best friends, I've known him since I was 9 years old. We were Fear And Loathing-it from Flagstaff, Arizona, to Chicago, Illinois, after his semester ended. I think I was maybe 21. We stopped to camp in Moab, Utah, on one of the most beautiful nights you've ever seen. And on that night, as we were thoroughly enjoying the UFOs and the glowing red rocks that were to become our beds, we decided that we were born under a very lucky star, and we still believe it. And then we laughed—but we we're truly grateful.

The thing about that little anecdote is, at that time, there was nowhere else I would rather be. So as I try and describe this song, I want you to know I will never forget how beautiful this universe is, but things change and now there's always a place I would rather be: home. When you're away for months and some asshole tries to vomit on your shoes for no good reason, I get freaked out [and] disgusted. In this song, I write, “It's an ugly world where beautiful doesn't mean much of anything / Let me in.” It's easy to forget about that lucky star for awhile. But the bottom line is, it's always there—and as long as the door to my house and family will always open, that star will always be shining somewhere. Go outside—maybe it's above you right now.

“This Light”
This is one of the first songs I wrote for this album. It was written while I was on tour with Alkaline Trio. I had been away for quite a long time. Generally, my wife and I handle that really well. But for whatever reason at the time in question, I was having a hard time communicating. I was depressed, not sleeping. All she wanted to do was help, and I didn't know how to respond, and for a time I was certainly being a bit chilly. But this song kinda spilled out of me when I realized that I had to get better, because she deserves better and I had to get home.

“On Monday”
Originally, this tune kinda started after one circumstance, and was then finished after another. (Sometimes that happens in the songwriting game.) So I'll just get into the chorus—circumstance A, as it were. Basically, I had been waiting for weeks to see my family while on tour, they had been waiting to see me, and we had a pretty sweet plan to hook up for a show and a day off in a certain city not far from my home. Well, as I tend to do sometimes on the road, I wasn't treating myself very well. (I know you probably all assume that I run a weekly marathon and rock the P90-X on the regular; however, that's just not the case—sorry, but I was just born with this stunning physique.) No, sir, and when this weekend that I had been looking forward to for so long finally arrived, my body gave up and i became extremely ill. Not hungover—no, no, no, this was real and much worse. So my weekend was shot, I missed my family and I was so beyond bummed, I can't even tell you. Yup, the glamorous life of staying up all night drinking alone on a tour bus really bit me in the ass: “But I blew it this time, and I missed you on Monday.”

On a musical side note: It was super-fun to have my friend Erin Lewis over to jam on that organ. I think it really makes the tune. Thanks, E-Lew!

“Me And Denver”
It's a folk song. [There’s] not much explaining to do here—if you can hear, or read, or have someone sign it to you, you'll get what's going on. It's definitely one of my favorites on the album, though, because the sentiment is real. Most of us don't need anything; we're lucky in that regard. But a lot of us are missing a lot of things—maybe it's people, maybe it's answers, or hope, love, trust, whatever. If you're looking, I really do hope you find it.

How 'bout those harmonies?! Give it up for Pete and Bryan Groleau. Those boys can sing!

“Say Say Say”
At this point, the record starts to take a turn for the better; things start looking up for dear ol' me. In a fittingly bitter fashion, I begin to learn to stop feeling sorry for myself and stop taking things for granted. I learn to say “fuck off” to the negativity and appreciate the here-and-now, as it was all worth it. There comes a time to forget about things, to put all the bad memories, all the bad choices [and] all the critics into a giant balloon and let it all float out into space, to hopefully burn up somewhere far away from here. For I have learned recently that need is a very strong word, and I try to remember that there's not much on this planet that I actually need. For that, I am thankful.

“The Last Day We Ever Close Our Eyes”
As things really start to lighten up, I decided to write a poem to my wife. I want this love to last forever. I want that so badly, I honestly picture us being here on the day the world comes to an end, because that's what it will take to bring us down.

“From This Oil Can”
My favorite, a song for my daughter. “Though your leaves were born in ashes, they will die in the sunlight.” I wrote it as a lyric for her, but I wrote it as a promise to myself.