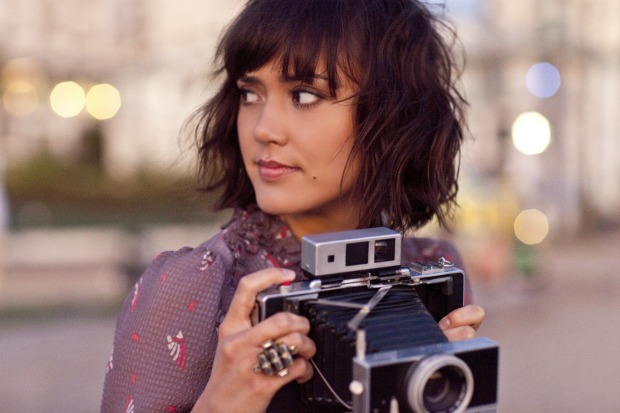 Dia Frampton takes us track by track through her solo debut Red, which is in stores now.


“Isabella”
I wrote this song in Nashville. I was writing with two friends in this really cool cabin-like house on a farm. You could see rows of trees out the window and a dog digging in the yard. It made me feel at home after being in an apartment in L.A. for such a long time. We started to write a song and finished it in three hours; I suggested that we keep writing since we were having so much fun. We let our guard down and just started messing around. I feel like the best songs come when you're not trying to write a “hit.” I wrote this about my little sister who was having a really hard time living in my parents’ house when my mom and dad were going through a (to say it lightly) tough phase in their marriage.

“Don't Kick The Chair”
I like to write dark songs to happy tunes; it's a little confusing to the listeners ear at first. They hear it and dance and get excited, and then the next second they dive into the lyrics and say, “Wait a second.” However, I wanted this song, although dark, to have an overall optimistic view on life (lyrically). I really enjoyed having Kid Cudi on this tune as well. His rap just makes me smile.

“The Broken Ones”
This song seemed to have written itself. Lyrically, this song is very true to my life and how I feel about relationships (past and present) and also how I feel about my friends, and vice versa. My closest friends have always loved me despite my faults.

“Trapeze”
This song came about in a rather funny way. I was hanging out with my two friends who are also great writers, Dave Hodges and Dave Harris, (the guitar player for John Mayer), and yes, I geeked out.  Dave #1 started playing a tune and I said, “Wow, I love that beginning. Let's build on that song. It's great!” And he laughed and said, “I was just messing around. That's a Bob Dylan song I was playing.” Of course I felt rather stupid, but then we just started jamming folk songs and “Trapeze” came out. I wrote this song, lyrically, about a friend of mine who had a very tragic childhood. However, he never spoke of it until after four years of me knowing him. It was odd because, lots of people with their dark pasts tend to dwell on them and sometimes victimize themselves, leaning on their crutches as an excuse not to press forward. My friend, on the other hand, lived as if nothing had ever happened. When he told me of his past I was shocked. It's amazing how some people can overcome hardships and move forward, becoming their own person.

“I Will”
Where to begin with this song? I got to record this with Blake Shelton in Nashville. Watching him cut vocals and sing lines I had written brought tears to my eyes. (I'm a cheeseball. Sorry.) This song is the ultimate friendship song. I feel like I could hear it on any of my favorite Disney movies, and I kind of love that. I wouldn't be where I am today without the help of Blake. Whenever I sing this song I just feel so grateful and so lucky.

“Daniel”
This song is pretty self explanatory. I didn't even bother to change his name. It's about someone who still, to this day, is very special to me. I think about him often. I hope, soon, I'll be able to sing this song without tearing up.

“Good Boy”
This song is about a very close friend who was molested when he was a child by his neighbor, who was guilty of molesting many of the kids in the neighborhood. Unfortunately, the boys were too scared and confused to tell anyone, thinking that they were “good boys.”  The neighbor died of old age.

“Hearts Out To Dry” (iTunes bonus track)
Possibly my favorite track on the entire record. I wrote this song with my sister Meg. She did a lot of the production work on this song as well. (She's quite a talent!)  It's fun to write with friends and work with producers, but when I work with my sister, I can just be myself 100%. We are also close enough to say to each other, “Yeah, that part sucks.” No hard feelings. Meg and I wrote about ten songs for the Red album, however, like I said, decided all of them except this jewel weren't good enough to make the cut. As an artist, it's really important to weed out the “okay” songs. I wanted the chorus of this song to “hit you like a train.” Thankfully, I had Meg there, and she knew exactly what to do instrument-wise to make that happen.  his song, to me, gives me an out-of-body experience. I can just close my eyes and listen to it and feel happiness, pain, sadness and excitement. I wanted all the vocals to sound dissonant, like you were hearing a choir through a hall.

“Bullseye”
I wrote this song with Isabella “Machine” Summers, the keyboardist of Florence and the Machine. This song came together like a five year-old throwing random ingredients in a bowl attempting to make a cake. We weren't thinking about song rules or hit-making, we were just making a racket in a tiny little room in L.A. It was terribly hot that day and we had to keep turning off the air conditioning every time I would cut vocals or lay guitar down. I still remember just sitting there sweating. We got a lot of the percussion sounds by tapping picture frames together! I wrote all the lyrics for this one and wanted it to sound very anthemic, almost as if you are running or being chased by something terrifying but also exciting. She was an amazing producer to work with. She didn't hover over me and say, “Well, that line doesn't really rhyme,” but rather encouraged my crazy creativity.

“Homeless”
This song can be summed up in one sentence: “Home” is not a place. It is a person. (Or at least that's my definition of home.)

“Billy The Kid”
I wrote this song with two members of Foster The People, a band I am a big fan of. I didn't think anybody could top me on “mad scientist music making,” but they sure did. They had all kinds of crazy fun ideas that I was too happy to embrace. The intro reminded me of old western movies for some reason, so we wrote a fictional love story.  However, I find that when I write fiction, it most usually ends up being directly about me.

“Walk Away”
I wrote this song about a girl who was “given” to her father's friends for entertainment at the ripe age of eight. Yes, true story. However, for the sake of her discretion, I won't say any more. It made me very upset to hear the story, but even more upset to hear the ending. She never got any revenge, so I wanted to give it to her. In this song, she's going back to get 'em! alt