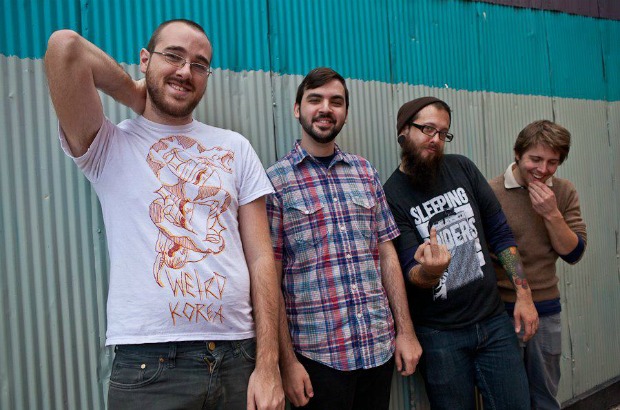 Indie rockers Dikembe’s Broad Shoulders offers an upbeat, raspy take on the resurgence of '90s emo with a dash of their Gainesville, Florida punk roots shining through. Frontman Steven Gray gave AP  the backstory for each song on the new album, which focuses on his growing pains as he exits college, gets married and finds a “real” job.

“Nothing. Stuff.”
When we originally put this song together, I planned on leaving it instrumental. But as I started coming up with lyrics for the record, a definite theme started to show up throughout the songs. I realize that every jaded punk dude is going to roll their eyes when I say this, but I have done a lot of growing up this past year. I graduated from college, got an actual job and moved somewhere new while I was finishing school. All of the songs on the record were, in some way, shape or form, about growing up. I decided that the minute or so blank slate on the first track was a good opportunity to present this theme, and made the choice to go for it. The lyrics are a metaphor involving trees. Trees grow, right?

“Apology Not Fucking Accepted”
If there is one thing I do not understand in a post-millennium world, it is racism. The idea that a predisposed judgment can be made about someone based solely on their skin color is ludicrous to me. I am not even talking about making concessions like, “They aren’t all bad.” No one is bad. We are all human beings. At the pizza place I used to work at, I encountered a ton of racism and one employee was very vocal about his ignorant opinions. It got to the point where I asked management if I could never work with him ever again. They agreed, but I still would see him in passing. I was so angry about this guy that I began questioning how I deal with things. I couldn’t find it in myself to confront him, but couldn’t stand being around him. In essence, I wrote a song about how as you get older, you begin to change how you deal with things. On the surface, though, I wrote a song about a fucking idiot who will never hear it.

“I Watch A Lot Of Jackie Chan Movies”
At face value, this song is about how I don’t understand the inner workings of houses. One night I was lying in bed, while my house made all sorts of crazy noises. I realized at that moment that there was all sorts of shit happening within the walls of my house that I couldn’t even begin to understand. I got it in my head that some of that stuff could go wrong, and my house could explode at any given instant.

“We Could Become River Rats”
Right before we started making this record, I got married and moved to a small town no one has heard of to finish my degree while my wife began her job. Gainesville is an incredible city, so leaving it was difficult. This song is about my love/hate relationship with the city, and how the whole thing amplified after I moved away. I thought about all of the awesome things in Gainesville—great friends, great bands, great food, intelligent conversations—and weighed them against all of the bummer things in Gainesville—jaded punk dudes get their own category here—and came to the conclusion that I love Gainesville for the same reason anyone can love any city: The relationships I made while living there were incredible, and I like to think that Gainesville, as a backdrop, helped to facilitate said relationships.

“I Just Don’t Understand What All These Kids Dig About Him”
I wrote the lyric, “With friends like these, who needs reasons to leave?” a long, long time ago. I thought it was catchy and would make me seem like a badass who did not give a shit about anything. Unfortunately, all of my friends throughout college ruled and if I would have used that lyric, I would have been a dick. Then, somewhere toward the end of my college career, a few great friends of mine got into the stupidest feud of all time. It was awful and thinking about it gives me a sickly feeling that I am almost certain will never go away. This song is about coming to terms with that shit situation, but never fully recovering in any of the affected relationships.

“Not Today, Angel”
My parents divorced when I was very young. They split custody and I would live with my mom on the weekdays, and visit my dad on the weekends. Being away from my dad for that amount of time every week inevitably created a barrier between us. It was strange to me that upon returning to my dad’s place on the weekends, things would be different, whether it was the house or things we talked about. This song is about the destruction of my relationship with my father and how I am not really sure whose fault it is that it happened.

“Librarians Kill For That Kind Of Quiet”
You know what is tough? Writing lyrics. You know what is tough about writing lyrics? Telling people what they mean. This song is about that. Sometimes the lyrics I write are deeply personal, but eventually, whether it is while we are sitting around in the van or right after I record the vocals, someone in the band will ask me what they are about. So writing lyrics involves two mental hurdles. One is coming up with the lyrics. The second one is explaining them in a way that doesn’t make you sound like a whiney idiot. It gets even more complicated when you are singing someone else’s lyrics. This whole thing is, like, way meta, right?

“That’s How What Works”
We recorded this song a long time ago for a compilation, and upon looking back at the lyrics, they are still about growing up. I guess this is something I have been coming to terms with for a while. This song is about how I have learned over the years that in order for any relationship to be successful, it takes a ton of work. I am not just talking about romantic relationships. The same goes for friendships and professional relationships as well. Working at relationships can be dangerous as well, in that if you work too hard at it, it can become strained.

“I’m Gonna Deck Your Halls, Bub”
I didn’t write the lyrics for this song, but I asked Ryan [Willems, guitar] about them as we recorded, and he told me they had to do with talking to a person who makes really bad decisions. My take on the song is that it is hard to not tell someone what to do when you care greatly about them.

“Sorry I Can’t Stick Around”
So I just graduated with a degree in education. Throughout my last two years in college, I did internships every semester in middle-grade classrooms. This final semester had me in charge of a seventh grade classroom for 15 weeks with only a supervising teacher who was there sometimes. So, in essence, I did a full workload for zero pay. The real kicker is, though, that I would totally do it a thousand times. I love teaching. I find it to be one of the few noble jobs left, and I have an overwhelming sense of pride when I tell people what I do. That being said, teaching is really hard. “Sorry I Can’t Stick Around” is about how much I love teaching, but how sometimes I feel like it doesn’t like me as much. There are also some parts in the song that have to do with what a bad student I was in middle school, and how I feel like my life has come full circle when kids act up around me as a teacher.