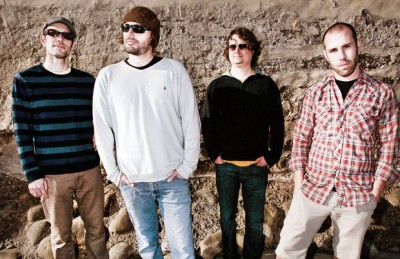 “The Deal”
I think this was the second tune that we worked on when first starting to play together. The sound was kind of aggressive and manic, which sparked the lyrical concept asking the big question: What is going on in the world right now? Everything seems to be getting out of control, and people seem to have less and less say with what happens these days.  I just wanted to express my distaste for this and also speak about how we can rise up and make a difference if we come back together at a grassroots level.

“Walking Away”
This song pretty much explains itself. It’s a heartbroken individual wondering what’s happening in a relationship, when everyone else seems to already know what’s going on. I hate when that happens.

“There She Is”
Just what the world needs: Another song about relationships gone wrong. “There She Is” takes us on a trip filled with doubt, mistrust and love lost. So sad, oh, so sad.

“Mag Girl”
Material things mean nothing to me, yet when some people become so obsessed with them, it becomes quite ugly. This track takes a stab at the shallow material girls of the world who should really take a look on the inside, rather than worry so much about what they are wearing or what [kind of] car you drive.

“Amsterdam Ray”
When I wrote the chorus for this tune—which talks about the “red light thunder” [to describe] the pain and anger in someone's eyes—I later thought of the Red Light District in Holland and kinda pictured this ray of light coming down on Amsterdam, which the song has nothing to do with.

“Dancin’ Girl”
We let it all hang out on this tune, which is about having some good ol’ fashioned fun on the dance floor. Inspired by rocksteady tunes of yesteryear, this one takes us back to the sweaty dancehalls of the island nations and makes ya want to shake your money maker.

“Wrong Night”
Dustin [Lanker, keyboardist] came up with this idea one night on the tour bus. A love song about not going out, but staying in with your sweetie and just enjoying the simple pleasures of each other’s company.

“Don't Look Back”
The past is the past and what happened, happened. No sense in re-living bad memories or experiences, right? It is so much better to just move on and live in the present and dream about the future. We can learn from our past, but re-living [it] all the time is too painful.