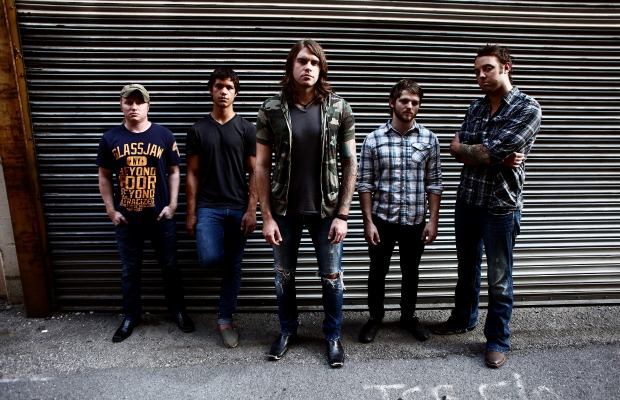 OH, SLEEPER guitarist SHANE BLAY takes AP track by track through his band’s new album, Children Of Fire. While you’re reading, check out an exclusive stream of their new song, “The Marriage Of Steel And Skin.”

“EndSeekers”
Oddly, this song was one of the last to be written, but the first to be recorded. Typically, I will write and record a song on my ProTools setup at home, then send it to Micah [Kinard, vocalist] and he writes his parts over it. Our drummer Zac [Mayfield] and I had this 32-note kick pattern we messed with and I wrote the rest of it around that idea. We recorded the entire record in track order. None of us had heard Micah's ideas for the vocals until he stepped behind the mic to record them. We were blown away with what he was doing. I wrote and recorded the [vocal] melodies the same day, and voila!

“Shed Your Soul”
Micah called me one day and said, “Shane, I need you to write a song that sounds like the end of the world.” I said, “Oh… um…. okay.” This is actually typical of us. Over a few days I sent my pre-production idea to the guys and James [Erwin, guitarist] actually called me, laughing hysterically at how heavy it was.  It was mostly an experiment with a lower tuning. Again, this was one of last songs written and first to be recorded. We had no idea what Micah was gonna do, and he came in like a juggernaut. Most of the vocals on this song were done in one take.

“The Marriage Of Steel And Skin”
This was the third song written for the album. Micah told me this song was about a father avenging his daughter's rape by decapitating the rapist, so we wanted a really psychotic/eerie sounding song. I wanted a “food for guitar nerds” song as well, so I wrote this entire song out around a tapping pattern of off-key weird notes. James showed me a beautifully eerie chord pattern he'd came up with and it fit perfectly as the chorus. This was the only song on the record that we prepro'd Micah's vocals on. Due to that fact, I think some of the best vocal takes were on this song. At the last minute before recording this song, Zac came in and re-wrote a few drum parts on the big breakdown, and really made this song what it needed to be.

“Hush Yael”
Hush Yael is a tragic story of the Haran family from Nahariya, Israel. On April 22, 1979, this family was murdered in a terrorist attack led by Samir Kuntar, a former member of the Palestine Liberation Front. The only survivor of this attack was the mother, Smadar. While her husband and one of her daughters were being kidnapped and eventually murdered, Smadar hid with her two-year-old daughter Yael in a crawl space above a bedroom in their apartment. Yael was accidentally suffocated in an attempt to quiet her from crying out and revealing their hiding spot. So this song was born out of that tragedy. We decided that my singing would be the voice of the mother whispering to Yael in those last moments, and Micah's voice would be the narrator of the tragic tale. Needless to say, this song is emotional and we were glad to be able to bring this story to our fans.

“The Conscience Speaks”
This song is derived from a little acoustic piece James was jamming on, that I overheard. I started singing over it and we decided to make it a track.  Micah wrote the lyrics after hearing my melody.  It was the last piece written for the record. Its really simple, I recorded one acoustic guitar track and one vocal line.

“Dealers Of Fame”
Musically, I had this finished months before we left for the studio. Micah surprised us again in the studio, as we had no idea what was planned for this song. We experimented with trade-off screams on the first verse, which we had not done since To Flagship. The chorus is a funny story: Micah sent me a text with the lyrics he wanted me to sing on the chorus, so I went in the vocal booth with my phone and sang what came to mind melodically. And that’s that.

“Means To Believe”
This song was initially a song I wrote for my solo project, Anullaby. But when I showed it to Micah, he said the lyrics fit into the concept of our record perfectly. We changed a few words around and recorded it. The lyrics are the questions I find myself asking with regards to Christianity.

“In The Wake Of Pigs”
The music for this song was written months before we left for the studio. Micah had a lot of time to sit on this one and really think about what he wanted to say. I knew we wanted a song where he could just go on a rant for a while, so I wrote accordingly. We experimented a lot with the chorus and are happy with the outcome. Zac blew me away with the drums he wrote for this.

“Claws Of A God”
This song proves you can find order in chaos and that sometimes the coolest stuff isn't planned out. James had written most the riffs for this one pretty early on in the writing process. I took a whack at piecing them together and got a rough sketch. But after that, we put this song on the backburner—which was a disaster in the studio. When it came time to record it, we had no idea what to do or where it would go. There was no bridge, and the chorus wasn't there. Most of the drums were written on the fly. Finally, we got the music to a point where we could put vocals down. Micah came in and slaughtered this song. Some of my favorite vocal takes from both of us are on this track.

“The Family Ruin”
[The concept behind this song] is where the girl kills her father. Micah and I threw around the idea that lyrically, the song should be “conscience versus action.” We wrote the lyrics to where I was the voice of the daughter, and Micah was her conscience. Micah references previous songs on the record, and ties a lot of ideas [together]. Most of the vocals on this song were done in one take. “The Family Ruin” is an example of lyrics and music melding together to create real imagery.

“Chewing The Stitch”
This song was finished a year before we went to record. It was the second song we finished. I was experimenting with some odd tunings and loved how this one forced the guitar to be dark and melodic.  This song features, in my opinion, some of Zac's coolest drum [parts]. Micah came in and did this entire song in three takes. That’s a huge feat, when you look at how many words that dude uses.

“Children Of Fire”
This was the first song I wrote for this record. It was finished a year before we went to the studio, which is why it has some aspects similar to the last album, Son Of The Morning. Musically, I wanted this to be the “guitar nerd” song.  When we were trying Zac out for the drum position, this was the song I sent him with pre-written drum [parts]. I asked him if he could write cooler drums than what was there, and he did—and he got in the band! Micah wanted to have an “over 10-second scream” somewhere in the record and put it down on this track—I think he got to 14 seconds. Yes, it was one take. We experimented with two chilled-out electronic verses amidst all the uptempo energy, which is very different from anything we would normally do. This track features, in my opinion, Micah's best vocal take of his career, over the ending breakdown.