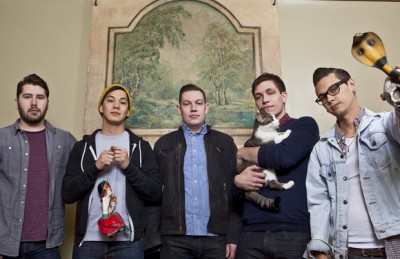 “Arrows”
It's hard to finally admit that the decisions you made growing up really did fuck you over. Everyone warned you, but you went for it anyway. I wouldn't change a thing.

“I Was Born In The Dark”
Your life is solely in your hands; give yourself some credit every once in awhile. That being said, take some blame as well.

“X’s On Trees”
“How we grow older, how we forget about each other.” The guitar tone in the bridge of this song reminds me of the Cranberries so much. Makes me smile every time.

“We’re Still Pioneers”
This is a real sarcastic and cheeky song. Whether it's my voice raising, or me just being too in touch with reality, certain people take it as negativity. This is me embracing it.

“Teeth”
I like when people think this song is actually centered around teeth and “going to the dentist.”

“Oh, Why Can’t We Start Old and Get Younger?”
This song reminds me of a great weekend. Kyle [O'Neil]'s parents went out of town and man did we take advantage of it. (Yes, we're in our mid-'20s.) We transformed a pantry in Kyle's basement into a vocal booth and just busted this song out. We ate lots of pizza and wrote keyboard parts on a toy keyboard we found. I think the energy and sheer awesome time we had really shows off in the song.

“Summer”
Our band has a tradition of stopping at the national mall in D.C. really late at night.  There's just something about being completely alone and wild in such a cool historic area.

“Life Is Killing Me”
I came up with this title one night and was really excited. [I] thought it had a really clever ring to it. I just couldn't stop thinking that it sounded familiar. I finally broke down and Googled it. I then realized this was the title of the Type O Negative record I always ignored. R.I.P. Pete [Steele].

“I Am The Challenger”
I get it from my parents. This song was recorded by Dave and I at two to four a.m. in a metal storage unit with no heat. Dave did the vocals and guitar in one take. We never thought it would be the version that made the record.

“Paintings Of Paul Revere”
I grew up going to my grandfather's house an hour away. One of my favorite places in the world that we had to sell after he passed away.

“I Locked My Time Capsule”
Originally was going to title this song, “The Smell of Hot, Wet Pavement.” That's the true sign of summer for me.

“The Wild Bunch”
Kyle worked with this 50 year old man who told him that when he was younger him and his friends called themselves, “The Wild Bunch.” That is the coolest thing ever.