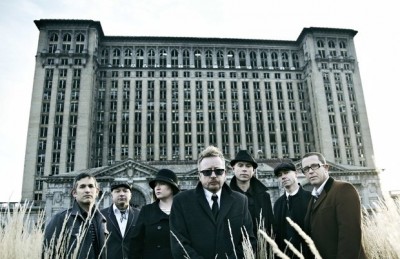 Frontman DAVE KING talks about the inspiration behind the new FLOGGING MOLLY album, Speed Of Darkness.

“Speed Of Darkness”
Dino Misetic, the artist who did the [album] cover, he grew up in the Balkans. His dad was telling us about how fast war came to the country and how bad it got, so quickly. He showed us a book that Dino was quoted in as a kid, called Sarajevo Marlboro [by Miljenko Jergovic], and [Dino] said, “In school, they taught us about the speed of light, but they never told us what the speed of darkness is.”
It happened so quickly,  how things changed and the whole downturn happened—I think an apt title for what we’re all about.  The war was a devastating time for people. The line from the song, “We set our course for Americ-ay”—literally, Dino and his family put a backpack on and made it to the United States.

“Revolution”
It doesn’t necessary mean, “Let’s all get together and have a huge, big revolution.” It’s about changing yourself from within. I know a few people who, in the economic downturn, have lost their jobs and started doing something completely different. They’ve tried opening a restaurant or opening a petting zoo.
It’s about the worst of times and getting through that and rising above it. Sometimes it takes a tragedy for something good to come out of it. It’s a positive-energy kind of thing. I want to project a positive energy. I think no matter what you write about, you have to convey an element of hope.

“The Heart Of The Sea”
You hear old sailors saying, “You never take the sea for granted.” I feel the same way about life. It’s a song about being aware of your surroundings and treating them with respect, because they can always chew you up and spit you out.
[The title] is from, actually, a book called [In] The Heart of the Sea [by Nathaniel Philbrick]. It’s about a Nantucket ship that [the story of] Moby-Dick came from. That’s horrific. I remember reading a scene where they pull up on a broken, shitty raft, and there’s a guy eating somebody who had died on the raft. He never recovered from that. That book’s pretty heavy.

“Don’t Shut ’Em Down”
Driving down the Motorway on downtown Detroit one night, there was a building on the side of the freeway. It was all boarded up and closed down. And there was a huge [piece of] graffiti on it that said, “SHUT ’EM DOWN.” My attitude was “Don’t shut ’em down.” Unfortunately, it wasn’t a hard song to write, because it was all around. It really resonated with what was going in with the city.

“The Power’s Out”
I used Detroit as the epicenter for the song, but it’s really to do with so many places, including Ireland. With the Irish people and the people of Detroit, there’s a lot of humor. There’s a lot of humor in that song if you really listen to it, a lot of sarcasm—“I’m from Detroit, where my job is secure/Secure in the fact that it’s gone for good.”
When I was growing up in Ireland, 1975-76, it was the worst of times. It was pretty bad. But I always remember the people’s sense of humor. We’d all sit around and individually sing a song. We had no money, but Jesus Christ, we knew fun.
The [lyrics about] savings being gone and the power’s out, that was from my own experience as a child. We had no money. We had one room in the house—it was an [apartment]. We couldn’t afford to pay the electricity bill. And the electricity would be turned off. And that happened a few times as a child. So I applied that to the current day.

“So Sail On”
Sometimes you don’t get the chance to say goodbye to someone who has passed on. My father died when I was ten, and I never had the opportunity to say goodbye to him. It’s a song about being in a relationship with my wife, Bridget, that I’m really, really happy in. And a lot of the album is about losing one’s job, but we hope that we always have somebody that we can honestly say we love. Sometimes that can get you through.

“Saints & Sinners”
We didn’t [originally] have an intro for the song. We were just going to go “one-two-three-four” and [kick into the riff]. Then Nate [Maxwell] started playing around with this bass line. He’s a big hardcore fan. And sure enough, he played the riff, and that was it.
As a band, it’s a really democratic thing. I think Bridget came up with the riff. But she wrote it like a ballad. And I heard it and grabbed a hold of it and sat down with my guitar and came up with the main body of the song. We all sit around and give our opinion for every song.

“This Present State of Grace”
That’s another one of those [songs about] keeping your head above water, above all the bullshit we have to deal with in life, doing it with a swagger and a sense of humor. Always put out a positive energy. Rise above things that try to drag you down. You have to make peace, but you have to make peace with yourself.

“The Cradle of Humankind”
In Ireland, we were always the underdog. We were always being pinned down. And in latter years, we were pinning  ourselves down, fighting among ourselves. And it was pathetic, so fucking ridiculous. And now we’re really working on a lasting peace in Ireland. And now that you can look back on that in a country where I thought you never could have, it’s such a positive thing, and it makes it easier to go back and sing songs like that.
I think you have to be in a good state of mind to be able to go back and revisit [the bad] times. And when you do, you come up with songs like “The Cradle Of Humankind” and “Present State Of Grace” and “The Worst Day Since Yesterday” and turn the bad times into a positive thing. And I’ve been very fortunate to be able to do that.

“Oliver Boy (All Of Our Boys)”
There was a man by the name of Oliver Cromwell [a 17th century British ruler], who basically tried to wipe the Irish race off the face of the Earth. I started off with “Oliver Boy,” then it goes into what’s going on in the Middle East right now—when will the stupidity of conflict actually end? I started off with him, and I brought it to the present day, because things haven’t really changed in that area of humanity: fighting over land and religion. Like, “Oh my God, would you please stop?”

“A Prayer For Me In Silence”
It’s Bridget singing. I wrote that song in about 15 minutes. I was playing it, and I was really enjoying the words, and I thought it would be beautiful to hear a woman sing those lyrics. And I thought I would love to hear my wife’s voice sing that. She got in there. Bridget’s not the kind of person that likes to be in the spotlight. So for her to do something like that is a big step for her. She started to open her mouth, and we all said, “Holy shit!” That is so beautiful. I always love having songs that have an edge and a beauty to them, as well.
I remember the first line, “I’ve been walking miles forever, through these footprints of my life/When I offered you my sadness, you took home with delight”—it was like she takes my good and my bad, and she makes me very happy. And I just wanted to celebrate that.

“Rise Up”
The chorus, I remember watching a wonderful show in Ireland on the television, it’s called Reeling In The Years. It has Irish history and everything involved in whatever year they’re talking about. When Ireland was going through its really bad trouble in the North [in the 1970s], there was a meeting in a hall. And it was about the Catholic people who were looking for a one-man-one-vote campaign where they could actually vote. And all the men, women, children sitting in this hall, they were singing “We Shall Overcome,” and it really hit me, and it reminded me of the Martin Luther King days. And I just had to put that lyric in the chorus.
That had to be the closer. The album’s all about life and its good and its bad. It’s a positive end to the way I see life. It’s rising up and getting your head above the bullshit—even if it’s one person at a time, it’s still a positive motion. I want that wheel to keep in motion. If it’s me today, it’ll be somebody else tomorrow. I want that for humanity. I want us to fuckin’ rise up above this shit. That was the way I heard the album end.