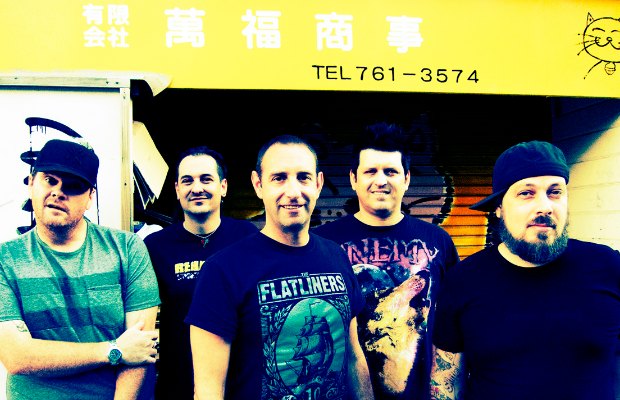 Yesterday, Less Than Jake released their new album See The Light via Fat Wreck Chords. As you press play or lower your stylus onto the new record (or on our stream), you can also get the story behind the tracks in this story written by lyricist/drummer Vinnie Fiorello.

“Good Enough”
There’s a tipping point in everyone’s life that happens when the years of being told what to do, when to do it and how to do it reaches capacity. “Good Enough” is about the liberating moment of realizing you can take your own path, free to think and believe what you want and not follow the blueprint that was laid out for you by someone else. This song truly encompasses the theme of the record. It questions “why” and asks “Why should I?” at the same time. Musically it’s the best blend of what we do as a band. The first 10 seconds of horns tell you that much.

“My Money Is On The Long Shot”
Can you really progress when you expect it to be handed to you? If you do, can you really call that progress? For a large part of the world the last few years meant tightening your belts, following a budget and hoping for the best. “…Long Shot” follows the headspace of the people who hope it will be okay and want more but don’t want to do any of the literal and figurative heavy lifting.

“Jump”
In this world you need to recognize there are things you need to be prepared to have faith in. You may not see them, you may not be able to hear them, but you have to take that leap off the cliff and know deep down without a doubt it is the right decision.

“The Loudest Songs”
Music has been my anchor as I weathered the storms that come and go. I wouldn’t be the person I am today without music. It's gotten me through the best of times and worst of times, and for that reason music has my undying passion.

“Do The Math”
When I was younger, everything seemed so desperate. Life was littered with former friends, former passions and far away dreaming but as time goes on you realize there are only a handful of things that truly mean something. That authentic connection comes few and far between, so you realize how rare it is when it comes along.

“Bless The Cracks”
This is a message to everyone that sits and waits. All that sitting and waiting will never amount to anything except wasting your days and nights. “Bless The Cracks” is about embracing the imperfections and being okay with the broken. Its about moving on breaking out and being free from the cage that we put ourselves in.

“John The Baptist Bones”
“I always bite the hand that helps me up.” That line of the song is my favorite on the whole record. Is there a plan for all of us that’s already written in the ether? Do you ever get that feeling that you are only seeing the sleight of hand and not the behind the scenes? Some people think a crutch is okay because it helps but I never believed that a crutch was a permanent solution to temporary problems.

“American Idle”
Looking back to times when you were the happiest can convince you that things were better back then, but I’m here to tell you that we fool ourselves into looking back instead of forward.

“The Troubles”
Knowing that you changed as a person is winning the battle but not the war. Winning the war means striking a balance between the good and the bad, being okay with whatever gets thrown at you and being able to dust yourself off and stand back up.

“Give Me Something To Believe In, Inc.”
This song is my favorite track. It chirps along while telling it exactly like its supposed to be. Be honest with yourself, look for the great in everything, and even in the darkest times of your life there’s always a light at the end of the tunnel.

“Sunstroke”
Ever feel like a stranger in the place you grew up? Ever feel like the Earth is about to break under your feet? Have you walked the street and felt angry and wanted to scream it from every rooftop? Did you ever feel the need to shake yourself awake from your sleepwalking through your day? Well, I have too. Make this song your mantra if you can.

“A Short History Lesson”
Sometimes you have to stop the cycle of how you live and think. There’s an old saying that “history is history.” The past will never come back and the mistakes you’ve made won’t happen again. Stop. Think. Stay positive. Forget the past because the past has already forgotten you.

“Weekends All Year”
Bad habits can also be the most fun habits. It gets easy to believe that you are in control of everything you do in your life.
It’s the invisible grooves you get caught up in that makes you question if there is someone else pulling the strings. The record ends with an answer to the original questions. We might be stuck, me might be down, but when there’s nothing left to lose you are able to only move up and forward.