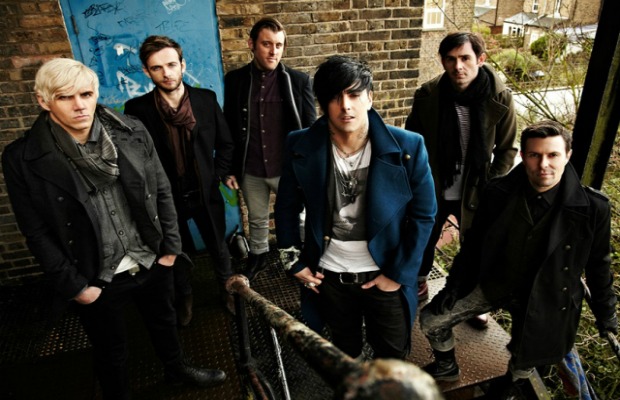 Lostprophets bassist Stu Richardson talks about the band's new album, Weapons , out tomorrow in the US via Fearless.

“Bring 'em Down”
Ian (Watkins, lead vocals) says this all the time, but it's true: We tend to always start our albums with a “kick in the arse” song to make sure people are paying attention. We all kind of came up with this one together, and as soon as Lee (Gaze, lead guitar) added that dirty riff in the end (his Dimebag riff) we knew it had to be the album opener.

“We Bring an Arsenal”
This song has actually been around for about five years. We wrote it in my bedroom. Ian came up with the chant in the beginning, and we could instantly imagine the whole of Reading Festival or a crowd at a football stadium singing it back to us, so we knew we needed to take the idea and run with it. It almost got lost with the rest of the Feldmann sessions, but it was just too good and catchy to ignore. I think the chorus is actually taken from something I said to Ian. Little known fact: I'm the true wit in this band.

“Another Shot”
This was the first song we tracked with Ken Andrews. It feels a little bit like a Hybrid Theory moment. Obviously, Ian would have to speak for the lyrics, but I see it as a really honest song of his, thematically. The message touches on not being able to let someone or something go, even when you know it's not healthy.

“Jesus Walks”
This song came about after the record had been mixed, actually. Ian came up with an idea, demoed it and sent it around to all of us. The impact was pretty instant and we knew it had to be on the album, so Ian and Lee went into a studio in Wales together to track the lead guitar and vocals. Then the rest of us tracked our parts in LA with Ken. Ian felt that the album was missing the big chorus track, and he was right (just this time).

“A Song for Where I'm From”
Lostprophets is kind of known for our anthemic songs that bring up feelings of home, old friendships and sentimentality. This is another one of those songs. It fits perfectly in the band timeline with songs like “Last Train Home,” “Last Summer” and “Where We Belong.” It's about feelings and memories that most people can relate to like where you're from, how some things never change, etc.

“A Little Reminder That I'll Never Forget”
I wrote the music for this one. I'm really into dark, shoegazey stuff like My Bloody Valentine and A Place to Bury Strangers, and this is kind of like a more pop homage to tones like theirs. It's one of those songs that sounds like a sentimental love song, but the underlying message is a pretty dark one.

“Better Off Dead”
Luke (Johnson, drums) wrote the opening of this and Lee came up with the Rage Against the Machine guitar bit at the end. For the verses, the only thing that seemed right [was the rapping]. We actually did track a couple of versions that involved Ian singing the verses instead of rapping, but we thought the shouted delivery was most powerful. Originally, we were talking about having someone else come in and do the rap parts, but while we were trying to decide on who we wanted for that, Ian went in with our friend Romesh and tracked his version and we ended up digging it and running with that.

“Heart On Loan”
This was one of the first songs written specifcally for this record. We wrote it in this house we rented in Norfolk (in the UK). Lee said at the time that he thought of it as a follow-up to “Dirty Little Heart” from The Betrayed, and we're definitely a band that likes to feel narrative. Again, you'd have to ask Ian about the specifics of the lyrical content, but I think this is another personal song for him about knowing there are people around you to catch you if you go off the rails.

“Somedays”
This is definitely the most low-key song on the record. Jamie came up with the chord structures and sent them to Ian so he could come up with a melody. Ian thought of it in his sleep, apparently. We built everything around acoustic chords. “Rooftops” was kinda like that as well, actually – written on acoustics. It's so simple – you know if something sounds good on a demo with just acoustic guitar and vocals that it has the makings of a great song.

“Can't Get Enough”
This was another one we wrote during our sessions in Norfolk. The demo was called something like “Movie Song.” I think Ian definitely had some big orchestral Bond-theme type ideas for it. That's kinda always how it is with this band. We debated the amount of strings to throw on there for ages.