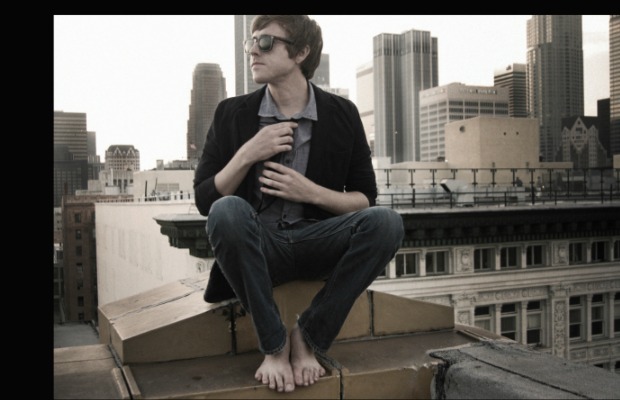 “Hailey”
This song was probably half way done when I brought it into the studio. For some reason, with most every song I do, I like to finish it “in the studio.” I very rarely “finish” a song before actually tracking it. This song was inspired by a true story that I had while I was touring a few years back. I was in Ohio and fainted on stage during the first song of the set. I ended up puking blood backstage and all night, but tried to make it to Chicago for the show the next day. As I was walking to the van from the hotel, I blacked out onto the concrete. Long story short, they had to cut me open and stop internal bleeding. They were pretty sure they were not going to be able to keep me alive through it. (That was heavier than I thought it would sound.) Me and Matt [Malpass, producer] spent a little while making the beat for the chorus before I went in and put vocals on it. This first track was actually one of the last things I tracked for the entire record.

“Dragging Your Feet In The Mud”
This was one of the last songs I wrote before I moved from Arizona to Los Angeles. In a way this song was dedicated to all my close friends and family that were in the Arizona desert. I still have a lot of good friends there. This song kind of wrote itself, to be honest. When I first started playing/tracking it in the studio, Matt says, “This sounds like a single.” Little did I know it would turn out to be the first single off the album. This song was inspired by pursuing a girl that you know could, and would, be a bad idea—and then finally realizing this and being at peace with it.

“Eat Your Heart Out”
I had this song for years, but I was never set on a specific format. I always seem to wait until I'm actually in the studio and forced to make a decision. Maybe I work better under pressure.

“Get It Right”
So Craig [Taylor] was at the studio in Atlanta for about a week tracking all the drums for the record. The day we tracked this song, he decides to make himself a few margaritas at about noon. A few hours later, Matt and myself are trying to explain to him how to play a drum fill for about 20 minutes. Anyways, I really like how this song came out. It was the only song that we used electronic kick drums with the real kick. This song was inspired by my childhood, all of the little things that you remember, but nobody else will ever know.

“Best Nights”
This is probably one of the more upbeat song I've ever written. I really wanted to have a faster, upbeat song on the record, and I've also had this song for years now. There was girl I was seeing a few years ago, and she ended up moving away, and so that was the inspiration behind the song. I've said this before, though: I always want people to interpret songs and lyrics the way they want to. A sentence could mean so many different things to so many different people. I don't usually like to say the exact meaning to a song. I feel like that might ruin what someone else took it for.

“I'll Bite You”I'm sure the first thing you're wondering is why in the hell the song is called “I'll Bite You.” I'm going to let you take what you want from that. As I'm tracking vocals in the booth to this song, Matt stops the take and says, “Damn, dude, you're kinda gangster.” I think I actually spit out the whiskey that was in my mouth. Then we had to kick out all of the girls in the studio, because we were about to have a serious smoke session. Although this song was a lot different from my demo version I had on my computer, I do really like how it came out. This was one of the many tracks that took form inside the studio.

“Seasons”
On this song I was kind of annoyed while tracking the drums, to be honest. We had about three different versions of drum takes. They were all very different, and the one Craig and Matt wanted to go with was a lot different than how I wrote the song. We ended up not going with that one and used one of the other takes, still different than how I wrote it. In the end, I'm proud how it came out. I've learned over the years sometimes you have to let a song go. It can turn into something even better if you lose some of your pride and stubbornness. I think all the bitching and moaning that happened during this song ended up only making it better.

“Ghosts”
I was inspired to write this song one day when I heard a Counting Crows song come on the radio. For whatever reason, that song created this track on the record. I'm not sure if it was the time of day or mood I was in, but it happened. I really don't like talking religion, but this is somewhat of my take on it. I just don't care for it much. Either way, I really like how this song turned out. We ran the end vocals through a Kaoss pad, and I just messed around with the setting until what is on the record came out. Hope you enjoy.

“Skin+Bones”
This song was supposed to be on the last Lydia record. We tracked a version of this when we were in the studio for Assailants. It was in a completely different format than this, and I ended up just saving the song for something else. Tracking Assailants, the last Lydia record, was not the best time I've ever had in the studio. In the end, I had to basically say, “Fuck it,” and save the song. It morphed over about a year into the song that is on Paint It Golden now. This song was inspired by realizing I've lost my mind. I'm trying to give everyone fair warning.

“Birds”
Me and Matt probably spent half of a day working on the ending to this song; it's in a strange time signature. It gets to the end, basically of a day of work, and Matt stops the track. He turns to me and says, “I don't think anyone is going give a shit about how much time and thought we put into this.” (I'm pretty sure I posted that quote directly to the Lydia Facebook.)  This was one more track that took a very different shape while in the studio. The entire ending was not even written until I got to Atlanta. Most of the vocals were written in the studio also. I wrote the chorus while on tour. I met someone that I'm very fond of on the East coast. Being on tour, though, you really do get homesick after a while. There are only so many random hotels and states you can wake up in before you'd like to be in your bed for a night. Anyways, hope you enjoy the record.