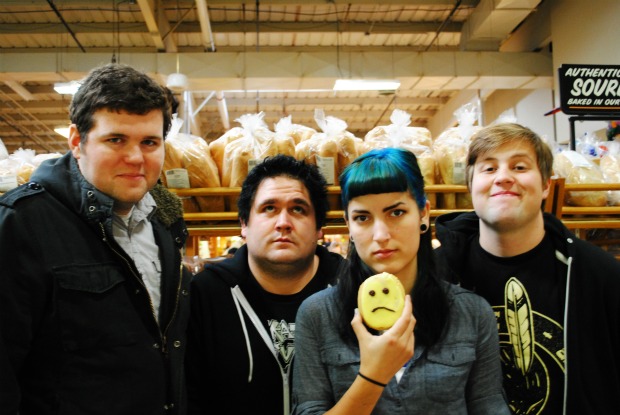 Known for their playful pop punk and no-one-is-safe internet banter, Mixtapes are releasing their debut full-length, Even On The Worst Nights, through No Sleep on June 26. After a slew of EPs, Worst Nights brings a full 16-song onslaught of tunes detailing the full emotional spectrum of 20-something suburbia. While vocalist/guitarist Ryan Rockwell may open the album spouting “By the time this is over, I won't have any friends,” the self-aware thoughtfulness penned tightly within his snarky demeanor throughout the record may produce a different ending. Giving altpress.com one of the longest track-by-tracks to date, Rockwell lays down a series of pensive, relatable anecdotes about life, loss and not giving a shit about what you think.

“Seven Mile”
This song is essentially a song about feeling out of touch with everyone around you the more you put work into something that you love. With most things you put your heart into, it's easy to get so wrapped up in it that you forget a lot of basic things and that can easily include human interaction. It's a song about that and just getting older and figuring out what you want to do without worrying about a level of success or what other people think. I've realized a lot of songs I write don't always focus on one certain thing, but a few things that I usually try and tie together, as I'm sure you will see.

“Something Better”
Basically a continuation of “Seven Mile,” this song focuses on the day-to-day basis of getting older and finding your place in the world. Sometimes we worry so much about the future that we don't enjoy the things happening around us. This song is saying that on most nights I just care about that specific night, and maybe one day we can find something better. Until then, these nights I spend with people I'm lucky to know, talking about movies on a porch, or how much so many current bands suck is just fine.

“Hey Ma Pt. 2”
Maura Weaver: When I wrote these lyrics, I was sort of living between places and I ended up at my mom's apartment, but could only stay for so long. Basically, my life was a bit of a shitstorm for a little while last fall.

I'm pretty sure these lyrics were some of the only ones I wrote during this time period that seemed worthwhile of anything. I remember feeling a helplessness that seemed immense when I wrote them, and I just wanted to express that.  As a nineteen-year-old who wanted to be hanging out with groups of people and getting into mischief, but also wanting to accomplish goals that other people my age didn't really relate to, I felt it hard to find balance.

I guess through this I was just reminded that I can change my life if I feel deserving of it. As long as you keep letting yourself feel helpless, you'll be helpless. No one is cheating you but yourself—especially if you look at the world like it owes you anything. I'm still working on this, but I'm glad for the reminder.

“Even On The Worst Nights”
The first two lines of this song were written by my friend Christian [Migliorese, bass] who plays in the band Candy Hearts.  This song is about looking at all of the things you used to do and being torn on weather or not you miss it. For instance, back in the day, some friends and I would go to the frat houses on the University of Cincinnati campus and bluff our way into the parties just to people watch or take their Xbox or change jars and cash them in at coinstar. That was wrong, but desperate times, man!

As a band, I realize we don't care about a lot of things that many other people do, but we love playing music and getting to meet people, and I am very passionate about the actual songs I write. So when I say, “We won't go down without a violent fight,” it’s that no matter how we are perceived or what other people think, this is what we are going to do.

“You Must Not Be Around Here”
This song is a love letter to Cincinnati and all of the things we get ourselves into. It's a song for when you hang out with a person when you know you shouldn't. It's a song about accepting the loss of feelings or a person in your life and coping with it. Sometimes you just take the memories or stories you get from a bad situation and, in retrospect, realize that those are good enough. Everyone has had a phase of going through something and thinking that it would haunt you forever. One day you can realize that all of these things shaped you and who you are in a way you are perfectly happy with and without all of those mistakes, we could never be where we are now, which is why I wouldn't have it any other way.

“You & I”
This is a love song. There is a band called the Fake Boys, and their singer’s name is Jim Dominici. We met about a year ago in Florida and have been the best of friends since. Jim and I got along from the very beginning, especially when it came to the music “industry.” To any band that talks about their image, what’s good or bad for it, or talks to the right person because it just might help them get on a shitty five-date tour—fuck all of that. Jim and I made this song for each other, and it's not about a girl but it is a love song to each other and to the people who feel the same.

“I’m Wearing The Device (Bridge, Water)”
The first verse of this song is about getting to that point where it's a daily struggle of doing anything as opposed to sitting at home and shutting yourself off from everything. The second verse of this song comes from the flip side of the first verse. I know most of us have a late-night hangout or certain place of sanctuary. Mine happens to be the Waffle House down the street from me in Harrison, Ohio. It's funny getting in a routine of being at a place where everyone knows each other’s names. You know certain things about each other and what you do for a living, or to go into debt in my case, but you don't really know each other at all. It's funny that sometimes those places can be the most comforting to be. The third verse of this song deals with a drive down route 128, where a lot of the photographs in our album booklet took place.

The chorus of this song ties is basically saying, “Many days and nights I think way too much and don't even know who I am. I used to run away from all my problems but then I realized that was pointless. I'm right here and ready to face whatever I have to deal with even if it sucks”.

The bridge of this song is about how the more we tour and release records there seems to be this amount of pressure I should feel or people we should talk to, but we don't really care. We got together in my basement and wrote some songs we are proud of and still are. If you are in a band and ever cater to an Internet message board or what someone else says, what's the point of doing it anyway? And that's honestly not calling out a certain message board—I mean the Internet in general (Jason Tate was excited for a second because he might have some news to post). This band has already done more than I thought possible, and we are so lucky even to be where we are. So to all the people that like our records: Thank you so much. For the people that don't: Thank you even more.

“I’ll Give You A Hint, Yes”
This is a simple song that is basically about finding someone to do all the things with you that you enjoy. I have so many places I love to go, to drive to, to sit at and write at and/or think. As much as I like to be alone a lot and just collect my thoughts, it's always nice to find someone who you can relate to. There's something special about showing someone your secret places, songs no one else will ever hear or anything like that. I've also realized that I don't like a lot of music people listen to, or at least don't “get” it, but that's okay because I can always listen to Here’s When The Strings Come In by Superchunk and it's okay. It's nice to fall in love with people and things. And when you do find these things, it feels like the other half of you is there and everything is twice as good.

“Russian House DJ”
One night, a friend’s parents were out of town and a bunch of people went to his house to hang out. Nothing particularly crazy happened or anything, but it was one of those nights that, for whatever reason, you remember for a long time. A bunch of friends were there along with some people I had feelings for and some people I didn't want to see. We looked at model train collections, watched movies, talked for hours, drove around and got lost in the woods and at some point, ate White Castle and I went to sleep on the deck in the freezing cold. I woke up next to someone I had feelings for, for a long time. We both called off work that morning and hung out all day. It was a great day and after that I don't think we ever talked again. Sometimes things work out weird like that.