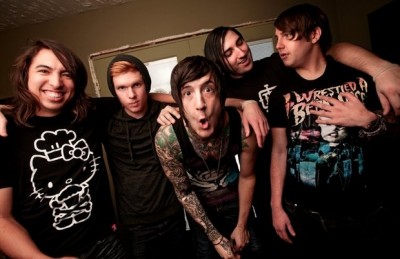 We wanted to put [this song] first, because it is extremely similar to the debut album, thus making it a little easier to transition into our second. The entire track is about dedication, sex and love. You can use your imagination when I scream, “It's so damn hard, I'll make this last. I’m the artist, paints in white, your skin canvas…” I've sang and written about love before, but with love comes some sort of physical attraction to that person. When you're with someone you are in love with, there is no doubt there are more than sparks; [it’s] more like fire, between you two and the sheets, or washer, car [or] kitchen counter. This song talks about that—note, “I was lost until I found myself inside of you.” The dedication chorus can be backed up by the lines, “This is faithfulness at its finest” and “I've had you so many times, but you know I could never get enough.” It's clear to see this song was intended to be dedicated to someone, but as the album progresses, you find that [sometimes] how you feel can do nothing to affect actual reality. Also, did I mention that “O.G. Loko” stands for the now illegal, original Four Loko drink?

There is no spelling typo here; Ben is my cat that I considered my child, and Alan [Ashby] considered his godson. This is one of the songs that Alan and I actually had completed before we joined Of Mice & Men when working on my new project. The overcast of the entire track could be defined by the lyrics, “I don't really think that you've ever walked a mile in my shoes. I don't really think that you know what I've been through.” It's simply talking to every single person that has ever opened their mouth about things they have no idea about. It's laughing at the fact that people talk and talk and talk, when all in all, what they are saying compares nothing to the actual truth. You don't live someone else's life; you have no right to judge them; you are not better than them; you have no idea what that person has experienced or the facts behind the stories that are told. It's simple: You have no idea what some people have been through, [so] live your own life instead of wasting it on assuming things about other people’s [lives]. Less talking, more enjoying, more living.

This song contains one of my favorite choruses [on] the entire album. Shayley [Bourget, bassist/clean vocalist]really hit the nail on the head wrapping up the entire meaning of this one: “I was all for you, you fell over my love, I just can't afford it this time.” You could also translate that into, “I was 100% yours. I loved you, but you took my love—and how I felt for you—for granted and stabbed me in the back. Now you want another chance, but I can't afford to let you ruin me.” It starts off almost like a love story, explaining about meeting and falling for someone that has changed everything for you, and made everything in life perfect. But as the song continues, I use words like “fake, lie, dying” to show how this once-“perfect and wonderful” thing was transformed and its true form showed itself.

The song [expresses] that someone was lying the entire time this supposed mutual feeling was shared. The words “know what I deserve, know that I should let you go, this is me, letting you go” really mean everything at this point. As the song slows down, Shay and I wanted to make it feel like you were literally letting [go of] this heartbreak [and] this memory. You care about someone so much, and they do something to completely and blatantly hurt you, [so] you have to move on and do something for yourself.

This song is so extremely self-explanatory, it's ridiculous. When in the studio, I was swamped with writing, and asked Alan if he wanted to work on lyrics for this one. All except for maybe a sentence or so were solely his own. It's one of my favorite tracks on the record. The song talks about clearly knowing someone is doing you wrong, and you are simply over it. You're not going to waste any more time, heart or air on them, because they have cheated you more than once and you have had enough. Someone can only apologize so many times, before their actions cry out louder than any of their words.

This song is dedicated to anyone who has ever had someone rip the very ground out from below their feet, leaving them with nothing. Stay planted; everything works out in the end and works out for a reason.

Shayley, Shayley, Shayley. I don't find it wrong to brag about one of my own band members. This man can sing, and I believe he really shows it here. This is my favorite track on the entire album, and is one I play over and over again, wishing my voice wasn't in the background. You can almost think of this song as a conversation from a significant other to ourselves. The girl repeating, “I don't mind it, I don't mind if you're overrated, or if you're staring at the edge of the world,” talking about exactly what we do, exactly how we live our lives. Always on the run, always on the road, traveling the world. Being a shadow, moving about, trying to fill the void we have always been searching for. “But I can see that it has to be you, love” is claiming that no matter what, it's you, it's real and it's something that's been so solidified nothing could move it. As the song begins to soar, Shayley belts out, “If we climb this high, I swear we'll never die.” He screams that if the two can make it as far as they have been, if they can overcome [their] obstacles, then there is nothing to lose, nowhere to fall from, no way to ever come down from the pinnacle [they've] reached.

You can write an entire album about whatever you'd like—”You think you know about me? Well, I think you're nothing. False words, fall dead”—but it still doesn't make it relevant if everything you are singing about is completely untrue. And still won't affect the listener if you mean absolutely nothing at all to them. You know you are over a person or group of people when you don't even hate them anymore. People have made statements about people being better off dead, and thinking they could play God, blah blah blah. So we wrote this little doo-wop just to prove the point that we are still here, and that I am still here, still kicking. I say in the song repeatedly, “I'm here, alive, and I'm relentless, I'm relentless, I'm relentless,” and I mean it with the utmost importance that I'm not going anywhere. It's going to take more than a little open heart surgery, a fork in the road or a teenage angst song or two to stop myself and Of Mice & Men.