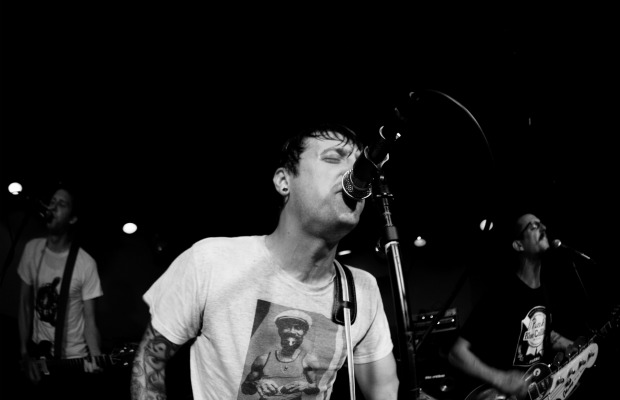 Drummer LUKE MCNEILL takes us track by track through the COPYRIGHTS’ new CD, North Sentinel Island. It's out today via Red Scare Industries.

First, I'm going to preemptively say that I don't like to write songs pertaining to a specific personal situation. There is always a personal reason I write songs, but I always try to write in general enough terms that it can relate to more people's lives and situations. With that being said, I'm not going to do the usual, “This song is about [blank].” I'm just going to share some stories and anecdotes that relate to each song.

“Trustees Of Modern Chemistry”
First, it starts with a clip from a ‘50s travel documentary. It fits the album's theme well, and starts the record off on a darker note. The lyrics are simple enough in this song. Basically, a good rule of thumb to take away might be, “Don't drink to feel better, only drink to feel even better.” I break this rule many times, and most times it ends with myself or a relationship being even worse. The title is a reference from the greatest achievement in American cinema, Road House. I want to live in a town where it's completely normal for someone to drive a monster truck like it's their everyday car.

“Crutches”The first couple songs on this record are kinda downers, lyrically—on purpose. They both deal with consequences for actions. Everyone makes mistakes; some are worse than others. [But] sooner or later, self-realization has to come. The lyrics use alcohol and drugs as the catalyst here, but really, your crutch can be anything.

“Hard-Wired”
I got the idea for this song while in a waiting room at an ear, nose and throat doctor. I thought I was deaf in one ear, but shit went away. Anyways, I was waiting for a long time, and a National Geographic magazine was propped up directly in my line of sight for like an hour. It was a cool picture of the Earth from space, and it just said, “Are we alone?” The song isn't really about aliens or anything like that. It's just a cool question that can apply to many things, especially when trying to comment on human nature and why we act like we do, which is what I was going for here.

“20 Feet Tall”This is one of the more specific songs on the record, and although it might seem like it in the lyrics, I'm really not trying to goof on any particular subculture or trend. The gist of the story is that there will be problems in your life, no matter what. But guess what? There will also be perfect days in your life, no matter what. Recognize them— and party.

“Expatriate Blues”
Me and Adam [Fletcher, vocalist/bassist] are both from the same small town in Southern Illinois. Brett [Hunter, vocalist/guitarist] and Jeff [Funbug, vocalist/guitarist] also grew up in small towns. When you move away for the first time, there's always the slight hope/expectation that it's temporary, and you'll be back before long. After a while—it could be months or years—you realize that's not home anymore, and you realize you don't want that to be home anymore. It's somewhat sad, but it's a big world with lots of places to see.

“Bow Down”This starts with a clip about North Sentinel Island, which is basically the most isolated place on Earth, and home to natives that have never made contact with the outside world. It's a nice juxtaposition for this song, because it comes right after a song that touches on feeling like an alien in your hometown and the song deals with the consequences/duties of modern living. The song ends with hope, though. It's so much easier to write songs solely rooted in negativity; they just sound cooler and better as rock lyrics. But I always try to write about negative things for a reason, which is usually to accentuate positivity and hope. Wow, that sounds lame and pretentious as shit! Fuck it.

“Worn Out Passport”
This is one of a few songs written with a particular person in mind. It fits well into one of the main themes of the record, that being travelling to far-off, distant places. This metaphor works for many 30-somethings like myself, who are constantly battling between growing up and being responsible and still grasping to some notion of youth and wildness. Travelling to crazy places is obviously not easy when you have a mortgage and family—just as being in a band isn't or fucking riding motorcycles [isn’t], or whatever. It's nice to have someone in your life that understands that, though, and is going through the same war.

“Restless Head”I had an apartment that was waaay too close to the street, which happened to be a busy one, all day and night. Also, this apartment had holes in the wall big enough to see daylight, and the windows were single-pane. Anyway, I might as well had been trying to sleep in the middle of the fucking highway. I spent many nights there alone not being able to get to sleep, wondering what the fuck I was doing in this town. The worst nights were when I had no whiskey—and this song could be about a night like that, I suppose.

“Sleep Better”
The second half of the sleep section. There's only two lines of lyrics, so I guess you can figure it out. These two songs together also play into the theme of the record pretty well. What to take away from them? There are worse things in life than sleepless nights. In fact, sometimes sleepless nights are the best thing in life.

“Scars”A song about the wild side and about the people who have the stones to actually live it. Like “20 Feet Tall”—and most other songs—there's another perspective here. Although it's a lot more fun to hang out in a bar next to a fuckup hobo than a straitlaced accountant, both parties want for what the other has. It's human nature I suppose, no matter where you are.

“Never Move Your Back Row”The title is a reference to The Catcher In The Rye. Holden runs into someone who knows a girl he used to play checkers with. Holden remembers the girl never moved any of the checkers in her back row. That is all he seems to remember about her, and the only thing he wonders about is whether she still does that. I took away that she was hiding something from Holden, and that fascinated him. I'm pretty sure that's a misinterpretation on my part, but I still like to think that was the case. Brett and Adam thought it was in reference to Black Sheep, when Chris Farley screams at David Spade that he never moves his back row playing checkers. That works too, I guess, since that movie rules.

“Well-Fed and Warm”
Another song about the comforts of stability versus the boredom. At the end of this song is the North Sentinel Island shanty. I thought it worked well here, because it sort of ties in the themes of boredom and “adult” life with the innate desire to throw it all away sometimes and retreat to the wild. The bittersweet part is that once you act on those desires, there's no more dreaming of more distant places. You've seen it all; there's no more discovery. Also, chances are the truly wild people will know you are not one of them. They can see right through you, and you will not be welcome. However, it's a very important part of your life to still have the desire to say, “Fuck this shit, I want to just bail on all of it,” even if you don't act on those dreams and desires. If/when you come to a realization that you are comfortable and satisfied with what you've done, you're dead.

“Hell Will be Party Time”I knew this was going to be the closer when I wrote it. The title is from a crazy Christian comic that Brett would always take from truck stops on tour. The song's main theme is about the lengths we will go to be our own person, to at least convince ourselves that we think for ourselves and follow no one. While we worry and argue about things that don't matter, we grow old just the same. The record ends with another clip from a ‘50s travel documentary. Instead of talking about the modern world beating someone down, though, it talks about a primitive world concerned with the only things that matter in life. It's always best to end with hope.