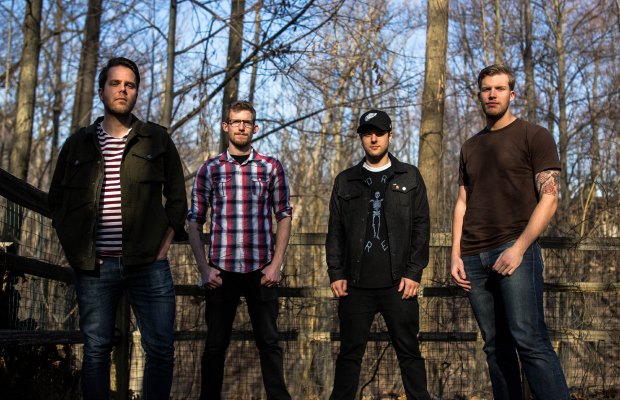 Today, The Swellers release their new album The Light Under Closed Doors on No Sleep Records. We caught up with the Diener brothers to explain the stories behind the tracks.

“Should”
JONATHAN DIENER: I was finally able to use a lyric I've had since 2009 which ended up being the name of this record. This song personifies the concept of The Light Under Closed Doors, being stranded in a quarter-life crisis and trying to adjust to normalcy. Trying to figure out the type of person you are and dealing with things like guilt, fear and commitment again. After revisiting a scene in Eternal Sunshine Of The Spotless Mind, the lyrics ended up writing themselves because it reflected the situation I just went through. Life is weird.

“Big Hearts”
NICK DIENER: Jonathan sent me a few lines of lyrics he came up with, and he probably had some music to go along with them, but I hijacked the words. I had a riff that fit his verses perfectly. I wrote the rest of the lyrics, which I pretty much already had written as an idea for another song. Sometimes the songs that come about the easiest are the catchiest ones. “Big Hearts” was ne of the first tunes we wrote for this record.

“Got Social”
NICK: As with most songs I write, the riff comes first. But this time some lyrics came along naturally. I was pretty excited that the song started taking shape and I had a focus. I wrote it as a weird song for a side project, using a baritone guitar tuned to A (which means super-low and heavy), and that project never came to life because I made all the songs into Swellers songs! This one is pretty self-explanatory. It's about crappy girls who get crappier over time and act like nothing ever happened.

“High/Low”
NICK: I'm not wired like most people. I feel like I'm from another planet sometimes. This song is about wanting to take off and not come back until people evolve. Heaviest slowest and almost shortest Swellers song to date.

“Great Lakes State”
NICK: Michigan's cold Winters are something I've grown to hate, but nostalgia is the only thing keeping me from completely hating the season. Every record we do seems to refer to the weather and our geography at some point. This one felt right. It's about telling somehow how you feel before the ice melts, pretty much.

“Becoming Self-Aware”
JONATHAN: After a breakup in the middle of a two-plus month tour, I had a week at home, so I decided to couch surf at my friends' houses before trying to settle down in a new living situation. I learned a lot of valuable lessons, questioned a lot of things and learned a lot about myself. This is a song for all of the people who feel left out and realize that part of growing up is letting go.

“Friends Again (We Can't Be)”
NICK: This starts with some lyrics I snagged from one of my favorite songs of all time that my friend Jeremy wrote. It felt nice to sing those words. Then I spin it off into a song about heroin and how I have no time for a friendship with someone who cares so little about him/herself and the people around them. As I get older, it gets easier to dump people I don't need. You don't have to try to save everyone. Most people will suck worse than you. Fact of life.

“Designated Driver”
JONATHAN: Lyrically it tells the straightforward story of meeting someone new and thinking something great is about to happen, then having to bail on everything to help a friend in need (i.e. a very drunk friend trying to walk 10 miles home in a blizzard). When I got back, that someone had moved on already. Doing the right thing got in the way. Doing the right thing also made me realize I can do better. It's nice letting out some anger from a stupid situation like that.

“Favorite Tune”
NICK: This song is about never feeling fully content, always moving, working, creating and expanding, to the point where you fly off the handle and get consumed by it all. Luckily there is usually someone who knows how to talk sense into you, keep you grounded. This is one of the catchiest songs on the record. Bring on the sugar. I told Marc Hudson (the guy who recorded the album) I needed a Saves The Day guitar tone for this one, since he's recorded them before! It has a very Stay What You Are / Through Being Cool vibe. I guess they rubbed off on us while we hung with them in the studio while they recorded their new record.

“Call It A Night”
JONATHAN: We've been a band for 11 years, and we're starting to feel it. The older we get the more settling down sounds like a good idea. We went from angry, stubborn youths to pretty bitter and realistic veterans. When it all comes down to it, we just want things to work out. If they don't, we're finally okay saying we can call it a night.